The Covington Heritage Foundation will hold its annual History and Holly Home Tour on Sunday, December 8, between 2 p.m. and 5 p.m.

For the first time the tour will include two historic churches. Featured will be four homes in the W. 19th, W. 20th and Jefferson avenues area, as well as Covington Presbyterian Church, and St. Peter Catholic Church. 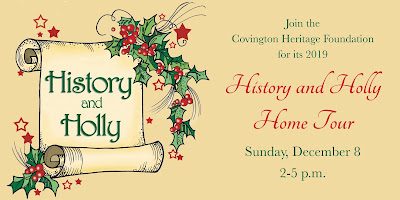 Music will be featured in a special program at St. Peter Catholic Church from 1:30-3:30 p.m.

The annual home tour has become a perfect outing for Covington residents and out-of-town visitiors to enjoy with friends and family as they walk the pedestrian-friendly route (trams will also be available), touring the seasonally decorated homes and churches, and enjoying the sounds of the season from a harpist and strolling carolers. In addition, there will be new Christmas cards and ornaments (by local artists Suzanne King and Jax Frey, respectively) available for purchase. 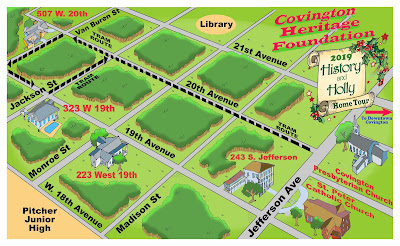 A map of the home tour. Click on map to enlarge the view.

Tickets are limited and may be purchased online by clicking HERE. On event day, participants will exchange their online tickets for a required wristband at Covington Presbyterian Church, which is serving as tour headquarters, before starting the tour. 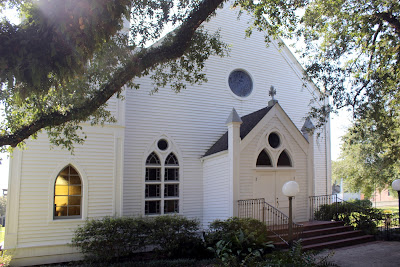 Covington Presbyterian Church at 222 S. Jefferson Avenue: Covington Presbyterian Church was founded in 1848 as the Berean Church Covington and was located at the corner of New Hampshire and Independence streets. The first worship service was held in the current location in 1903.
Visitors are greeted at the entrance by a majestic live oak which, on April 16, 2018, achieved notoriety by being named "Presbyterian Oak" by the Live Oak Society of the Louisiana Garden Club Federation. The powerful and long-lived oak is represented in the church logo and in the title of the church's strategic plan, "Rooted and Reaching."

Also of note is the chancel stained-glass window created by Stephen A. Wilson of Baton Rouge and dedicated in 1982 and the antique cast-iron fountain that was given to the church in 1983 in memory of Caryl Ann Haney. Church members will give tours of the sanctuary and there will be Christmas music. 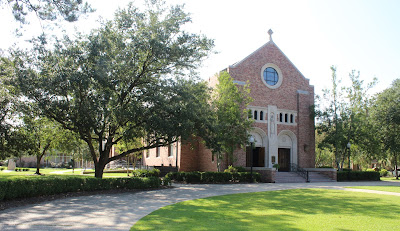 St. Peter Catholic Church at 125 E. 19th Avenue: St. Peter Catholic Church was founded in 1843 and is the oldest Catholic church on the Northshore in the Archdiocese of New Orleans. The original church was near the Bogue Falaya River, a second church was built in 1892 at the corner of Massachusetts and East Rutland streets, and the current church was built in a traditional style and dedicated in 1940.
Of note is the statue of St. Peter on the church facade, which was designed and sculpted by Corrado Parducci; the Sacred Heart of Jesus statue, which is more than 100 years old and was brought from the second church; the statue of the Blessed Mother, which was purchased in 1922 and was also brought from the second church; and the stained‑glass windows that depict the significant events in the life of St. Peter. There will be music from 1:30-3:30 p.m. today in the church for tour participants. 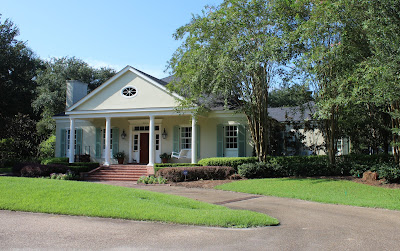 507 W. 20th Avenue: Lisa and Peter Wilson built their home in 1989 and have loved living in old Covington for the past 30 years. The home is where they raised their children and now enjoy entertaining their grandchildren. The home has changed several times over the years as the Wilsons adapted to the changing needs of their family. The tornado of 1997 also brought unexpected changes as many old trees were uprooted and landed on their home, while also destroying a barn on the property.

The Wilsons especially enjoy the calm and peaceful nature of their neighborhood, and being beneath the beautiful oak trees continues to be their family's special place. 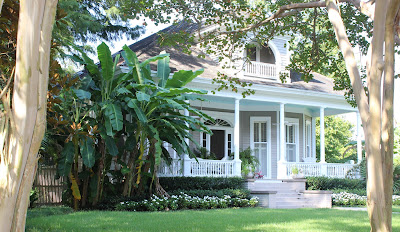 323 W. 19th Avenue: Bill and Conie Abernathy looked at many historic homes in the area before settling on this one in 2009 because it "seemed like such a happy place" and it "stole (their) hearts." The Abernathys relocated to Covington after living in Memphis for almost 30 years when Bill embarked on a second career at SLU after retirement.

Conie says that with a son, daughter-in-law and grandchildren who live in New Orleans and many friends nearby, they have spent many happy days in the home. While there have been cosmetic changes to the house, the only major project has been the addition of a garage. 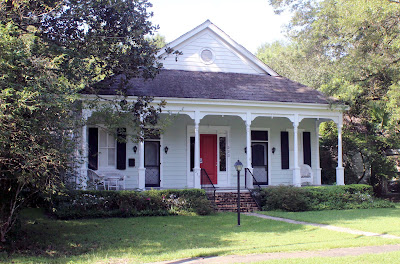 223 W. 19th Avenue: When Randy and Peggy Aultman first saw their home, they recognized that it was in poor shape, yet could see what it once had been and could become again. So, in 1996, they moved from a smaller home on 18th Avenue and began renovations.
They added the front porch and the center front door as they turned the duplex back into a single-family home. They removed the three-tone shag carpet to expose heart-of-pine flooring and found wood walls beneath plywood paneling, and also added a fireplace, opened up walls, and installed a
treehouse.

The home was the first that local builder Fred Badon worked on, and legend has it that the owner at the time fed grapefruit to her dog while she watched Fred and the others working on the house to be certain they didn't slack off. The Aultmans have also been told that the small structure at the rear of the house was originally a smokehouse, and that former owners used to enjoy eating dinner on the front porch during the fall months. 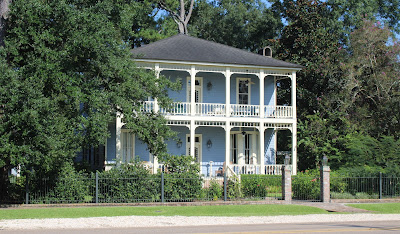 243 S. Jefferson Avenue: Jerry and Wanda Braswell have lived in their home for 19 years, though the love affair with it began years earlier for Jerry, who delivered prescriptions to the house when he opened Braswell Drugs. After purchasing the home, which was built in 1897, they spent two years working on it, taking it down to the studs and reconstructing the home's staircase in its original location (it had been moved to the back of the house when the previous owner had converted the upstairs into four apartments).

All of the wood is original to the house, and the doors and ceilings were stripped of many layers of paint during the remodel. Visitors are encouraged to look for the 200-year-old grandfather clock that still tells the correct time twice a day, the painting above the living room fireplace by local artist Robert Cook, and Wanda's Braswell Pharmarcy room. The Braswells are also fond of the spectacular view of St. Peter Catholic Church from the home's beautiful balconies.