In 1976 the Covington B&PW Club recognized the many contributions of Miss Lucy Perkins, a school teacher in Madisonville in the late 1800's and early 1900's. Here is the article about her written by Naomi Rausch, as part of the group's acknowledgement of the pioneer women of St. Tammany Parish.

Today the Business and Professional Women Club salutes a pioneer teacher, Miss Lucy Perkins, who lived and taught in a time when public education was only beginning to take root in the deep South, in a time when the slate remained the backbone of school equipment.

It was only thirty years previous to her teaching (1859) that  John McDonough, a wealthy businessman died, leaving his estate of over a million dollars to the New Orleans and Baltimore school systems. It was a period that was not favorable for social planners or for dreamers, for the aftermath of the Civil War constituted perplexing life problems to the people of the South.

Here was a young woman who without a school building, with meager supplies, and a Bible for her textbook, taught the young children of Madisonville and surrounding areas how to read, write, add, and subtract, and at the same time she took heed of the words from Proverbs "to know wisdom and instruction, to perceive the words of understanding."

Captain William W. Perkins and his wife, nee Harriet Newell Thurston, arrived in Madisonville in 1847. Captain Perkins was originally from Massachusetts and his wife, Harriet, was from Ohio.

Their possessions were sent to Madisonville via the Ohio and Mississippi rivers on a float boat that the Captain had constructed in Massachusetts. The boards of the float boat were used for the flooring in their newly-built Madisonville home which is now one of the oldest homes in Madisonville.

Miss Lucy Perkins was one of nine children born to Captain and Harriet Perkins. She was born in 1852 and died in 1937. She was born, lived in and died in the float boat timbered home. Her body is interred in the old Madisonville cemetery.

Rather than write of Miss Lucy, as she was lovingly known, I submit a very descriptive letter written in 1936 by Mrs. Jessie Dutsch Johnson, who was principal of the Madisonville Junior High School in 1925. The letter is addressed to Miss Jane Dutsch. 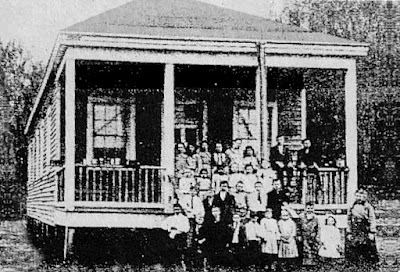 "Miss Lucy started her teaching career in 1880 in a residence on which she paid rent, had her own benches built (each bench accommodated six pupils) and used tables for desks. She bought her heater and the wood for burning, in fact she paid for all supplies.

"There were no blackboards. Students used the slates which they continued to use until about 1916. Her salary at that time was $30. She had gone to school in New Orleans and graduated from high school according to their standards. In later days she took what came to be known as a Teacher's Examination for a certificate.

When her salary was $30, she really was making money because at that time one could buy groceries for one-half of a nickel in quantity. Remember "quartee red beans, quartee rice, and lagniappe. (Salt meat to make it taste nice.)

"It was not until 1900 that her salary was raised to $50. Unfortunately, she never made more than $100 per month. But she always contended that she made the most when she first started as far as buying power was concerned.

"A school house was built in 1886, merely a garage, but the wooden desks then had places to put your books, still six sat in a row, and the blackboards were merely painted walls. Miss Lucy went to summer school in New Orleans, usually she attended Tulane University, but not every year. 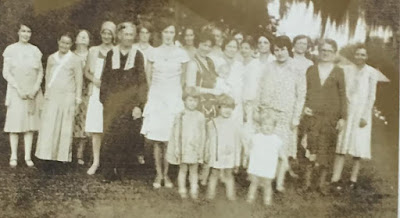 "The old brick building on our river front known as the Chambers Home at one time supplied a room for her to use. That is the building that was torn down years ago. Remember the tale about the damage done to that building during the war by a cannon ball."

The Breast Works were near our home that the soldiers used. The little school was surrounded by old stately oaks laden with moss and the clear waters of the Tchefuncte rippling by.

At this time Miss Lucy was self appointed and paid by the few who had money. Later the Parish Officials appointed her and set her salary. She retired in 1925.

"Until her death she was a very active person with perfect teeth and an infectious smile and a wonderful disposition. Brick houses followed log cabins in quick succession. The home she lived in is no doubt one of the oldest in town.

She always spoke of the difficulty of getting textbooks. None were available so they used writing, spelling, arithmetic and the Bible.

"Upon her retirement she received a loving cup (from private contributions.) There was no pension fund. She lived an independent life, and as far as I know financially supported herself. During her entire teaching career, she brought her lunch to school, always enough in her lunch box to feed two, herself and the unfortunate. 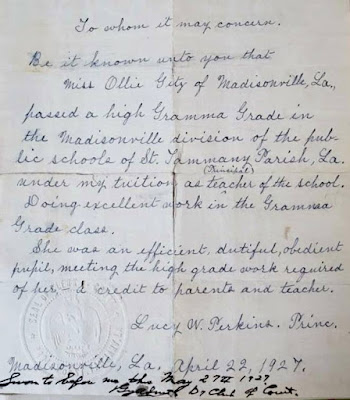 Teacher/Principal Lucy Perkins wrote this letter about one of her students Ollie Gitz in 1927.

"Even while working under me, she brought that lunch. Some of the earlier school sessions were only three months long, but the nine month sessions began some time in the early 1900's."

From letters and diaries of the Civil War, one finds numerous indications of friendly sentiment among opposing participants: it was the same "Billy Yank" like "Johnny Reb," and during the Civil War the Northern or "Yankee" soldiers camped in the street directly in front of "Miss Lucy's" home. Always the Yankee men were courteous to the young Perkins ladies. However they did take all of the chickens and animals for their food.

And then there is the story that when a pupil used profanity such as damn or perhaps stronger words, Miss Lucy would say "Use the word sugar bowl, it is much sweeter."

Miss Lucy and the Perkins family played an important role in the Madisonville Presbyterian Church. Often the Church was without a permanent minister and ministers from New Orleans or Covington would hold services. 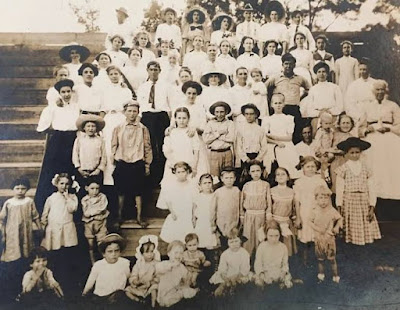 On these occasions it was the Perkins family who entertained them with dinner or with supper. Miss Lucy also served as a Sunday School teacher for many years.

So the Business and Professional Women's Club (of 1976) saluted Miss Lucy Perkins for her interest and tireless efforts in broadening the minds of young children, for her sharing of her meager earnings, and because from her teachers children grew into wiser men and women.

In gratuity Miss Lucy received a loving cup without a pension. Certainly that loving cup was overflowing with brightness, with potency and with love.