Justin E. Wilson came to St. Tammany Parish in the mid-1970's to speak to the St. Tammany Press Club, and he proved to be a great guest and provided a thought-provoking message. He was invited to speak to the press group by John Fahey, the Times Picayune's "Florida Parishes" correspondent, who knew Wilson through his many sports-related activities.

Wilson and his humorous presentation were well-received by the press club members, and the evening was a success except for one thing. While speaking to the group in the crowded restaurant, someone stole Wilson's leather hat that a famed LSU football coach had signed and given to him. So that kind of put a damper on the event. Wilson was sad to lose his hat, and the Press Club was shocked and angered that it happened under their noses.

But all was not lost. Fahey went to work, got a new hat that looked just like the old hat,  contacted the LSU coach, and he signed it just as he had before. An informal meeting was called, and Justin Wilson appeared, not knowing what was going on. Fahey presented him with the new hat, autographed and everything. Hopefully, that restitution restored Wilson's faith in St. Tammany.

It must have, because 15 years later, Wilson decided to buy a house in St. Tammany and equip it to be his new home and television recording studio for his growing cooking show audience. 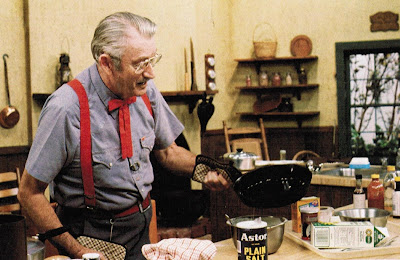 Justin Wilson in his kitchen (Photo from PBS Archive)

Back to the beginning, Wilson was born April 24, 1914, in Roseland near Amite in Tangipahoa Parish, the son of Louisiana Commissioner of Agriculture and Forestry Harry D. Wilson.

While he started his career as a safety engineer in south Louisiana, he soon found that when he spiced his safety lectures with bits of Cajun humor, the audiences at the oil refineries were more attentive. According to a New York Times article about him, he said that he once met American Humorist Will Rogers and that got him to considering a career in public speaking.

His career as a Cajun humorist was launched in the 1950's. He recorded several record albums of his Cajun humor, once appeared on the Ed Sullivan Show, and became widely known throughout the South for his signature phrase: "I gar-ron-tee." That phrase is now a registered trademark of the food products company that bears his name. He also appeared on The Tonight Show (both Johnny Carson and Dave Letterman versions) and the New Hollywood Squares. That must have been interesting.

He recorded over 27 albums, authored eight Cajun cookbooks (beginning with the first in 1965), two Cajun humor books, and he helped develop many Cajun products.  In addition to his comedy gigs and recordings, he also composed several songs, including the music for his cooking show. There was even a Christmas album featuring a jazz band. In Denham Springs, he owned two restaurants. 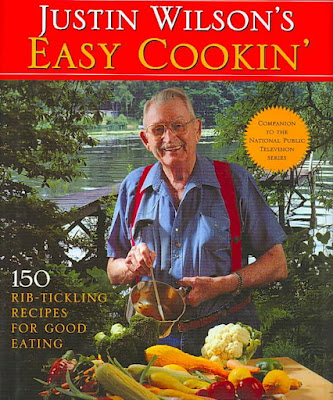 One of his many cookbooks

His Cajun cooking series aired on Public Broadcasting for more than 30 years. According to his obituary in the Livingston Parish News, he always said he was "not a chef, just a damn good cook."

"His status as a Louisiana celebrity and goodwill ambassador was confirmed when he was chosen as one of the first members of the LSU Hall of Fame. He was quick to point out that he had not graduated from college, noting that had he gone back to school at LSU he would be a fifth year freshman," the news article explained. 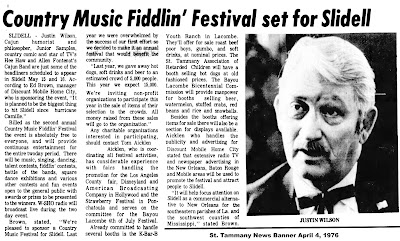 He was guest celebrity at the 1976 Slidell Country Music Festival

"One thing he was serious about was helping people. He is remembered as an ardent supporter of local youth athletics, once rewarding a team he helped coach to a championship in Denham Springs with a trip to the Houston Astrodome," it went on to say.

"Anytime that I called him that had anything to do with these kids around town, he was there," former PARDS director Tony Dugas said. Wilson would often donate money anonymously to help children who could not afford to pay for registration fees, uniforms or equipment, Dugas commented.

His story about squirrel hunting

The Livingston Parish News article also noted that Wilson was a Professional Member of the American Society of Safety Engineers, Member of the American Federation of Television and Radio Artists, American Legion Facundas Post 181, and Lifetime Member of Ducks Unlimited. He taught four human relations courses at police academies in three states.

Some of his many books
Wilson came to live in St. Tammany Parish in the early 1990's, outfitting a large abandoned mansion (The Rankin House) on Cane Bayou east of Mandeville for a television recording studio for his cooking shows.

Hyatt Hood recalls that the house Wilson chose in Big Branch had quite a history. It’s an Art Deco styled home that was started in the 1930’s by William Rankin who was a crony of Huey Long. "It is believed that it was built with embezzled money and bricks that were intended for Fontainebleau State Park,” Hood said. Rankin was caught and the shell of what appeared to be an unfinished castle/fortress was abandoned. 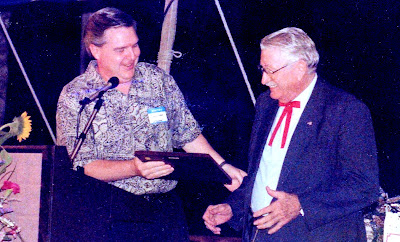 Parish Councilman Terry Hand giving Justin Wilson a plaque
"The house, not being far from the edge of a bayou, soon had trees and vines and scrub brush growing up all around and inside the walls. The house was brick with curved walls and a flat roof. It had tremendous openings for windows, but was never completed," Hood stated. "My father, knowing of stories of the property, one day became determined to find it. Walking through the thick woods in the area on the Eastern side of Cane Bayou, Dad was just several feet away from the structure but didn't see it. It was that overgrown.

Ultimately Uddo sold the property to Justin Wilson in May of 1989. Justin was still doing cooking shows and decided that the house could do double duty as home and TV studio for his show. 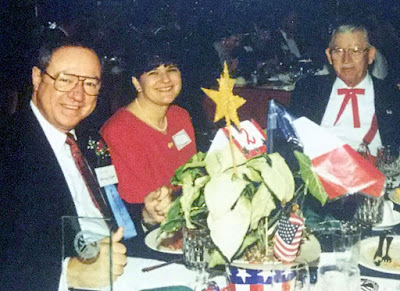 Justin Wilson, at right, was guest speaker at a St. Tammany West Chamber of Commerce officer installation banquet in the early 1990's. Jimmy Rogers, incoming president, is at left.


He eventually moved to Summit, MS, and lived there for several years, but at 87 years of age, Wilson died on September 5, 2001, at a family home in Denham Springs. Upon his death, many articles were published around the country, revering him as an internationally renowned humorist, cook and cultural ambassador. He is interred at Port Vincent Community Cemetery in Port Vincent in Livingston Parish.

He had brought Cajun humor, the Cajun lifestyle and philosophy, and Cajun cooking to the forefront across the nation. His name will always be associated with Louisiana and the Cajun heritage of which he was so proud.

The company to which he lent his name provides Cajun cooking essentials and is now under new ownership and has a website at Justin Wilson Cajun Products Webpage .

The Legacy of Justin Wilson

Justin E Wilson was born in Roseland,La. outside of Amite. He wrote and published his first Cajun cookbook in 1960, thus unknowingly launching his entertaining and cooking career and grew to a national syndicated cooking show on PBS and Mississippi Educational Television. With three TV cooking series and ten published cookbooks, Justin has entertained millions with his instructional cooking and whimsical Cajun stories., poetry, and Louisiana heritage.

Justin is famous for the catchphrase I Garontee® and How Yall Are®. Justin has charmed his way into the hearts of countless of Americans popularizing Cajun and southern cuisine unlike anyone else to this day. His cooking shows still air on PBS and other local broadcast networks. Justin Wilson died September 5th, 2001, in Baton Rouge Louisiana. He was 87.

Before Justin Wilsons first cooking shows appeared on PBS and Mississippi educational television (METV) Cajun food and cooking barely had a place on the national stage. With his trademark catchphrase and down home charisma , Justin brought Cajun cooking out of the Bayous of Louisiana and into the homes of everyday Americans.

Justin Wilson Southern Products uses Justin’s recipes and we stick to his level of quality therefore making it in Justin’s words a Gourmand Cajun product.

CLICK HERE to see a video interview with Justin Wilson as part of the Louisiana Public Broadcastings Digital Media Archives.

Scroll down and click on the "Play" Triangles in the center of the black box to start the videos.

The Rankin House on Cane Bayou