The following biography is an abridged history of Mrs. James Clifton Burns as written by her grandson, Phillip F. Burns.This biography was requested by the Covington Business and Professional Woman's Club Bicentennial Committee in recognition of the pioneer women who left their mark on the pages of St. Tammany's history.

This biography was published in the March 21, 1976, edition of the St. Tammany News Banner newspaper. It tells the story of the Burns family and the part they played in the Presbyterian church in Covington, the first rural school in the Parish, the fair association, and the American Legion ladies' auxiliary. The article's text follows:

The Challenge of Reconstruction

North America's Civil War had ended.  The last flag and the last guidon had fallen and the years of Reconstruction had commenced when Mrs. James Clifton Burns was born. The date was January 27, 1867. To many she was known as "Rob" because she had been christened Robenia, Robenia Laidlow Edgar, named for her grandmother in Scotland. 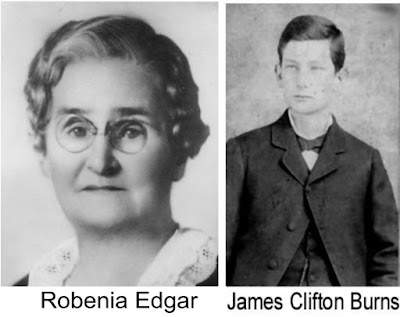 After her marriage to James Clifton Burns she was known to her family and close friends as "Mother Burns." Robenia's father Robert Edgar, left Scotland in 1858. Upon his arrival in St Louis via New New York and Toronto he booked passage on a steamboat for New Orleans. Two years later, Robenia's mother, Margaret Orr, left Scotland for New Orleans. Robert and Margaret had been sweethearts in Scotland. They were married in New Orleans just as Louisiana was about to secede from the Union.

The first children, Mary Jane, who was to become Mrs. Preston Burns, and Margaret, were born during the war. Robenia and her sister, Sophie and two brothers, Max and John, were born during the Reconstruction Period. When normalcy was restored to the institutions of New Orleans, Robenia, with her brothers and sisters, attended Washington Public School of the City of New Orleans.

It was in 1878, because of asthma, that poor health became a concern of Robert Edgar. As with so many New Orleanians of that era, he moved his family to seek the more healthful climate of St. Tammany Parish.

The Move To St. Tammany

They arrived in Covington in July 1878 to find that here was a little Presbyterian Church on the corner of New Hampshire and Portsmouth Street with no minister, no ladies aid, and no congregation. Its last minister, J. C. Graham, an Evangelist, left in 1863 when all work ceased on account of the Civil War. 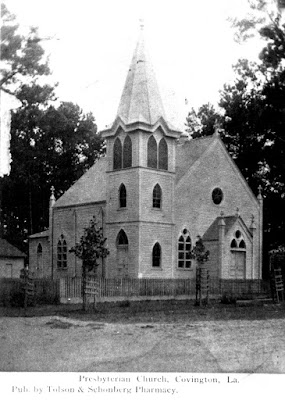 It was because of these pioneer families and the great generosity of the John Ellis, Chamberlain, and later, the Haller families that made it possible for the construction of the present church and manse.

From the earliest days there had been in Covington Private Academies and very few public schools. In 1885 Robenia wrote to the School Board of the Parish: "Gentlemen, I hereby make application for the position of teacher in the public schools of the Parish. If a vacancy exists, I would prefer to teach in the Third Ward as I reside there; there are a great many children in this neighborhood, and I could get up quite a large school. I was educated in the public schools of New Orleans but have never been examined for a teacher's position, this being my first application.

The approval of Robenia's application by the Trustees established the first rural public school in St. Tammany Parish. It became school No. 4 in the system and was located near Barker's Ford on the Little Bogue Falaya river, becoming known as Liberty Settlement School.

The new school mistress opened classes in April and school ran for a three months term with a salary of twenty-five dollars a month. That first day of school found thirty-two children of all ages coming by wagon, horseback and on foot from from great distances through the savannahs and pine forest to the one room that was their new school. 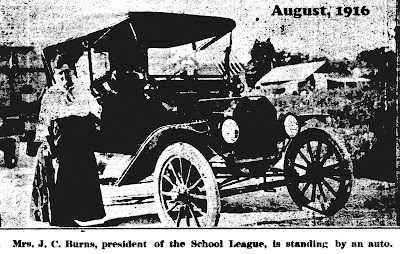 Robenia's interest in public education continued throughout her life and influenced the lives of her children. Three daughters, Hester, Ruth and Dorothy, became teachers in the Parish; her son Bryan, became a School Board member and for a time served as Board President. Philip, her oldest son, served on the Finance Committee of the board, and her son-in-law, the popular William Pitcher served many years as Superintendent of the St. Tammany Public School System. William Pitcher was married to Robenia's fourth daughter Margie.

An 1881 Description of Chubby Hill Plantation

Eventually the young couple established a home on their own farm: it was called "Sandy Hill." It was here that Robenia became distinguished for her vigorous understanding of the need of others, and because of her untameable spirit to eliminate need and suffering, she was often called upon by her neighbors in the surrounding countryside to travel through the dark of night to assist at the bedside of the sick or in mid-wifery at a birth or to tack in the crepe of a newly-made coffin.

This solicitous care of her neighbors developed in them a dependence which existed throughout her life. During her sixteen years in the country, she became the mother of eight children. They were Philip, Albert, Bryan, James, Ruth (Mrs. Jules Baguer), Dorothy (Mrs. Preston Prieto), Margaret (Mrs. William Pitcher) and Hester Burns. Her ninth and youngest child, Frank, was born after the family moved to Covington.

Came To Covington For The Schools

As her family grew and the children reached school age, she became dissatisfied with the short three months school year available in their country school. In 1905, James Clifton Burns moved the family into Covington where the greater advantages of the Covington school were available. A short time later Robinia and her husband established the J. C. Burns and Company on Columbia Street. 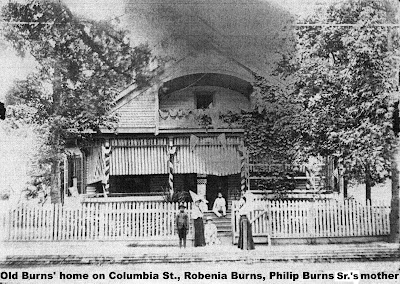 Her life in Covington was a dynamic one. She served as Deputy Grand Matron of District No. 19 of the Order of the Eastern Star and received from her own Southern Pine Chapter No. 81 the highest honor of Live Membership as a Past Worthy Matron. Robenia held office in the early Parent Teachers Associations of both Covington Grammar and the High School. In the 1930's, she helped to organize the school soup kitchens which later developed into the lunch programs as we know today.

She was awarded the Pioneer Club Woman's medal in 1940 by the Womans Progressive Union and was loved and honored by the Presbyterian Womans Auxiliary for her great work with the church.

Robenia's association with the Kings Daughters brought her into cooperation with Mrs. Sophie B. Wright, a prominent philanthropist of New Orleans with their work at "Rest Awhile" at Mandeville in behalf of the poor from New Orleans. 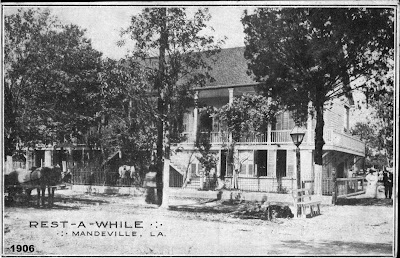 Mrs. Burns helped organize the St. Tammany Parish Fair Association in 1909 and was instrumental in the erection of the Educational Building. For several years she had charge of the Woman's Division of the Parish Fair.

Robenia was elected President, and Mrs. Frederick was made Secretary-Treasurer. Mrs. Burns wrote, "As president, I set up an office at my home, and we have now filed about three hundred adjustment and compensation claims that have received attention and final conclusion."

The nineteen century and even in the beginning of this century, this was a frontier country, peopled by unusually energetic personalities which a frontier civilization attracts and produces. The life of Robenia Edgar Burns is a faithful reflection of the type of persons who played important parts in this formative period of this nation, helping to direct the course that some institutions have taken. It is hoped that the ideals and values that made up the spirit of Mrs. James Clifton Burns will live on in the national character forever. 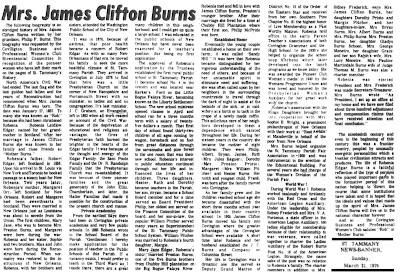