Here is a map of Iberville's route in his exploration of southeastern Louisiana in 1699. It included passing through the Rigolets within sight of St. Tammany Parish. 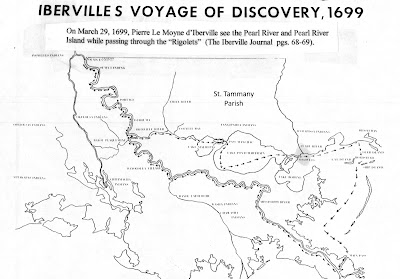 Click on the above image to make it larger.
Map Source: The Don Sharp Collection


According to the Virtual Museum of New France, Iberville explored and conquered for France much of eastern Canada, including Hudson's Bay. He fought and overcame the British at several key battles, but France then signed a treaty with Britain that returns several of the forts and parts of Canada that he had fought for back over to the English. Eventually he turned his eye southward, where the British were laying claim to large parts of the American continent.

"Forced to look elsewhere but still dreaming of giving North America to France, d’Iberville argues for the establishment of a French colony at the mouth of the Mississippi : “If France does not seize this most beautiful part of America and set up a colony, […] the English colony which is becoming quite large, will increase to such a degree that, in less than one hundred years, it will be strong enough to take over all of America and chase away all other nations.”

"His plan is to strangle the New England colonies between Canada in the north, the Gulf Mexico and Louisiana in the south and the Mississippi River in the west.

"On March 2, 1699, he succeeds where Robert Cavelier de La Salle failed: traveling by sea, he discovers the mouth of the Mississippi. Three consecutive expeditions, in 1699, 1700 and 1701, allow him to built the forts of Maurepas (Biloxi), Mississippi and Saint-Louis (Mobile). In 1702, having won the trust of the natives, the commander of Louisiana leaves that colony, never to return." 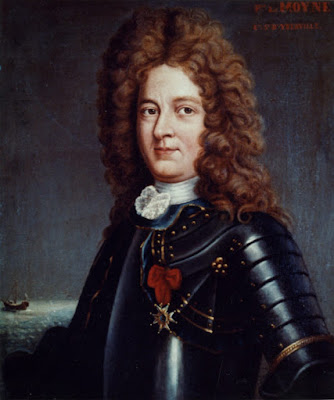 At one time, Bayou Manchac was known as the Iberville River. This is just one of the namesakes of south Louisiana that honors Iberville. Those include Iberville Parish, New Iberia, and a street in the French Quarter.

In 2008, the Louisiana Wildlife Federation passed a resolution honoring Bayou Machac (the Iberville River) as a key international historical boundary. The text from the group's resolution follows:

WHEREAS, beautiful Bayou Manchac, which lies along the boundaries of three parishes – Ascension, East Baton Rouge and Iberville – has been a river significant in Louisiana history, and has been included in the Louisiana State Historical Markers program, and

WHEREAS, throughout history, Bayou Manchac was home to numerous native American cultures, as well as later European settlements including Galveztown, Fort Bute, Fort San Gabriel, Manchac, and Hope Villa, and

WHEREAS, Bayou Manchac served as an international boundary in the original Louisiana Purchase, and

WHEREAS, Bayou Manchac, known for a time as the Iberville River, is described in the journals of Pierre le Moyen, Sieur d’Iberville, and in later writings of William Bartram, and

WHEREAS, much of the banks of Bayou Manchac are wooded and provide excellent habitat for a wide variety of riparian and aquatic plants and wildlife, and

WHEREAS, Bayou Manchac remains a quiet, natural, scenic waterway, protected by a canopy of trees growing from both banks, and is regarded by those that live in the vicinity as one of Louisiana’s most beautiful examples of nature.

THEREFORE BE IT RESOLVED that the Louisiana Wildlife Federation supports the designation of Bayou Manchac, from its origin near the Mississippi River to its union with the Amite River, as a Louisiana Historic and Scenic River, and urges the Louisiana Legislature to nominate Bayou Manchac for such designation.