A popular roadside attraction east of Slidell was the Reptile Jungle, located on U.S. 90 next to the White Kitchen restaurant.

Reptile Jungle was owned and operated by Arthur Jones who, after opening Reptile Jungle, went on to became a millionaire when he invented the Nautilus physical fitness equipment system. CLICK HERE for more information about Arthur Jones. 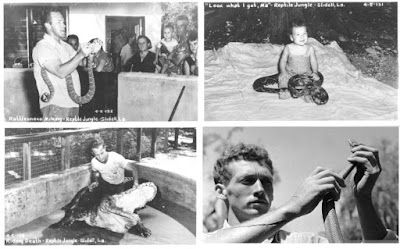 According to this article below, he was quite a character. He died in 2007 after a long and intense career. His obituary is printed below, as published in the Seattle Times newspaper.

Arthur Jones, the swashbuckling inventor of Nautilus exercise equipment, which revolutionized strength training by replacing the dead weight of barbells with a variable resistance technique, died Tuesday at his home in Ocala, Fla. No cause of death was reported. He was 80.

Gruff and profane, Mr. Jones did not fit the image of the creator of the machines used by svelte, leotard-wearing exercise enthusiasts. He wore horn-rimmed glasses and ill-fitting pants. He spent his early life hunting big game for zoos and collectors. He made television shows and a movie, all geared to outdoors adventure.

An episode of "Wild Cargo" with local New Orleans announcer Bill Wilson as host . Warning: some scenes may depict the killing of animals in the wild.
Click on play triangle to view.


It was his invention of the Nautilus that made his fortune and reshaped the world’s physique. It took bodybuilding out of the subculture of dank gyms and brought sedentary office workers into brightly lit fitness centers.

The creation was born of frustration. Living in the Tulsa YMCA in 1948, Mr. Jones became irritated when the barbells and exercise regimes that were then in vogue failed to give him the big muscles he sought.

“I ended up with the arms and legs of a gorilla on the body of a spider monkey,” he told Forbes magazine in 1983. “I figured there was something wrong with the exercise tool.”

One day, instead of quitting when he reached a plateau, he cut his routine in half and was surprised to see results. Deducing that muscles need rest to recover and that leverage affects strength, he began experimenting. He introduced his product in 1970 and dubbed it the Nautilus, after the nautilus seashell, which resembles the kidney-shaped cam that was his breakthrough development.

The machines and the company he formed to sell them made him a multimillionaire and landed him on the Forbes 400 list. At one point, financial analysts estimated that Nautilus, now based in Vancouver, Wash., was grossing $300 million annually.

He was featured on an episode of Lifestyles of the Rich and Famous
Click on the play triangle above to view the video.

But Mr. Jones’ flamboyant personality didn’t play so well in the business world. In 1984, Adweek magazine said he spent $4.2 million on an ad campaign as a purported ploy to avoid making a profit and paying taxes. The Internal Revenue Service indicted him in 1981 on charges of failing to pay federal income taxes in the 1970s.

He also disastrously invested $70 million in a video studio, dubbed the Nautilus Television Network, which produced a talk show starring his friend G. Gordon Liddy, the chief of the Watergate “plumbers.”

He sold his share in the Nautilus business and began experimenting with a new invention, intended to analyze and exercise lumbar muscles for those who have lower-back pain. That invention turned into the company MedX.

“This is the first machine that truly isolates the muscles of the lower back,” he told BusinessWeek magazine. “My competitors who say otherwise are liars or fools — or both. Let them sue me. I can’t wait.” Suspicious of the competitors, whom he called “thieves, frauds, fakers, slanderers and incompetents,” he often carried a Colt .45.

Born to a well-to-do family in Arkansas, he was the son of two doctors. He started running away from home at a young age and dropped out of school in ninth grade.

He rode the rails, he later told interviewers, until enlisting in the Navy during World War II and serving in the Pacific. After the war, he launched a zoo in Slidell, La.

Along the way he learned to fly and began collecting exotic animals, which he ferried to zoos, pet stores and researchers. He claimed run-ins with agencies such as the CIA and FBI, which he said accused him of running guns or bombs to Cuba.

For 12 years, the exotic-animal business thrived. He made a series of TV programs that aired as “Wild Cargo” in the United States. In the mid-1960s, he moved his family to Rhodesia, where they lived two years until the government took exception to his wild-game business and seized his assets, forcing his return to the United States.

He acknowledged that his politics were to the right of Attila the Hun and, while living in a state plagued by drug runners, advocated killing drug users.


Another episode of Wild Cargo tv show with local New Orleans announcer Mel Levitt as host. Warning: some scenes may depict the killing of animals in the wild.Click on the play triangle to view.

A Reading of the Article
"Faster Planes, Younger Women and Bigger Crocodiles"

Slidell Magazine has a video that features an article about Arthur Jones read by John Case on its YouTube.com channel.

To view the video, click on the play triangle in the window below.