Covington has several well-known guitar makers. One of them was Jimmy Foster, who made 7 string guitars. (Fosters Guitars) He built them out of a shop in Covington for a while and then he built a shop behind his home. He sold to some of the most famous guitar performers from around the country. 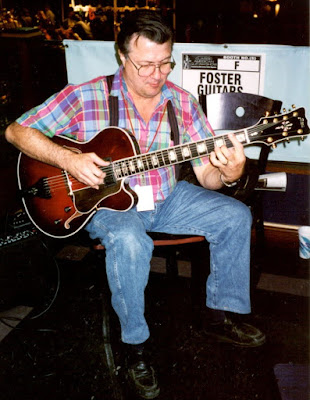 Greg Arceneaux said that Jimmy touched countless people’s lives through his skill as a craftsman and musician. "As long as his guitars continue to be played that legacy will also. He made our lives sweeter and more melodic and we can only hope we can do the same," Greg said.
Gary Granger said he met Jimmy twice and both times were memorable. "The first time I simply started talking to him at a music store and realized that he actually built this incredible guitar that I was enjoying. The next time years later I called him up, and he invited me over to his shop in Covington. I spent about 3 hours learning how he created those masterpieces and jamming on all kinds of great tunes with him. He was a great musician, a superlative craftsman and a very open and warm person to be around," Granger said.
Some of the players who use Foster Guitars include Paul Simon, Howard Morgan, Fred Fried, Clint Strong, Steve Masakowski, Hank Mackie, Pat Practico, Alan DeMause, Ron Escheté, Ted Ludwig, David Mooney, Rob Block, Todd Duke, Bill Solley and Jim Lichens.
Danny McKnight commented that Jimmy made three guitars for him. "I made three trips from my home in Texas to his shop in Covington to get them when they were ready. Jimmy always gave me a warm welcome and treated me like the friend we had become to each other. Jimmy was a good and honest man, easy and fun to be around, a fine musician and a wonderful guitar builder. He indeed will be missed by his many friends," McKnight said.
More comments about Jimmy Foster may be found at https://www.fosterguitars.com/in-memory
In 2006 Ted Ludwig interviewed Jimmy Foster. Here are some excerpts from that interview.

"Jimmy Foster is the most celebrated luthier in the New Orleans area. For the past thirty three years he has made guitars for many of the finest players around the world. What makes Jimmy special among his contemporaries is that he is a brilliant 7 string guitarist as well as a wonderful luthier. He has been playing weekly gigs in and around New Orleans since he was a teenager. His experience as a professional musician coupled with his intuition as a fine woodworker has helped Jimmy Foster create some remarkable instruments.

Ted Ludwig asked Jimmy how he first got involved in making guitars. "I spent a lot of time with my dad who was a body and fender man and could make anything out of a piece of metal or wood,: Foster replied. "Making things with my hands was something that always interested me. Being a guitar player since I was 11 years old, guitars had always intrigued me. I always knew that I was going to build guitars someday. When I opened my first shop I called it Foster’s Custom Finishes and Repairs. I was doing body and fender work while taking some guitar repairs. I had two business cards made for that business. One had a picture of a guitar on it and the other had a picture of a car."
According to Foster, his experience with painting cars helped him develop some of the rich finishes that he used on his guitars. "When I was a kid, about 15 years old, I was doing guitar repairs and refinishing work for many of the local music stores. My dad would drive down to the music stores and pick up the repair jobs for me. I would do the repairs and would spray the guitars in a booth that I made in my backyard. When I got my first shop I did work on both guitars and cars and it got to the point where the guitar repair work overtook the car repairs. Back then there was no one in New Orleans doing guitar repair so I got called to do warranty work for Martin, Gibson, Ovation, and Fender. That was when I decided to just do guitar repairs and refinishing."
Ludwig asked him if he did any work on some of the hand built custom guitars like D’Angelicos or Strombergs. Foster responded by saying that "Just about every kind of guitar that I can think about came through the shop. Being in a musically rich city like New Orleans, I have had players from all over the world come into my shop for guitar repairs. I have gotten to work on some of the finest guitars in the world. When I would work an instrument that was especially good sounding I would find out what it was that made that particular guitar so great. There was no one here to teach me how to build archtops, so I used the knowledge that I got from doing repairs."

So, over the years, he learned how to build guitars from examining other great guitars. He was particularly selective with the wood that he used. "Great tone woods are an essential part in making a great guitar," Foster said in his interview with Ludwig. "But, it is the way in which the maker carves and works the wood that determines how the guitar is going to sound. Benedetto said it and I think it is well stated. Every piece of wood has different characteristics about it. The way a guitar is going to sound can be adjusted by the thickness of the top and the way in which the braces are shaped.

To view videos about Jimmy Foster making guitars, playing guitars, and talking with other guitarists, click on the following YouTube link: https://www.youtube.com/user/jazzguitarmaker