In 2013 Cultus Pearson took to the microphone at a Louisiana Sea Grant presentation and told about his life catching crabs in Lake Pontchartrain. The video of his talk is on YouTube, and a link to view that is presented below. In his talk, he shared his efforts to protect the crabbing industry, the shell dredging challenge and the legislative visits that it involved.

Click on the play triangle above to view the video.


In the description of the YouTube video is the following biographical information:


Cultus Pearson, commonly known as "The Crabman of Lacombe," lived within the Pontchartrain Basin, since the 1930s. He grew up in South Point, La., a small fishing community on the Southshore near Irish Bayou, and learned crabbing from his neighbor.

His father worked as a bridge tender at the south drawbridge of the Southern Railroad, but always supported his sons' fishing efforts. Learning all he could about the habits of blue crabs, Mr. Pearson and his brother created a very successful crab supply business that later included a refined softshell crab process that is still used today.

Mr. Pearson served in WWII as a Sergeant in the Army and was awarded the Bronze Star for service in the South Pacific. After returning from the war he finished high school and earned a degree in Forestry from LSU. He was married to his wife Frances Davis for 63 years and they raised nine children. Mr. Pearson owned a service station in Lacombe and built fiberglass pirogues and lake skiffs while his children were growing up, but continued to crab throughout his life. 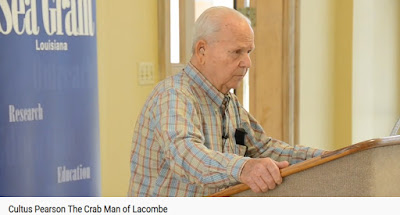