The year 1926 was a busy year for subdivision sales in St. Tammany Parish, especially in Mandeville. Of particular interest was the new West Beach Parkway Subdivision. Here are some advertisements from area newspapers. Click on the images to make them larger. 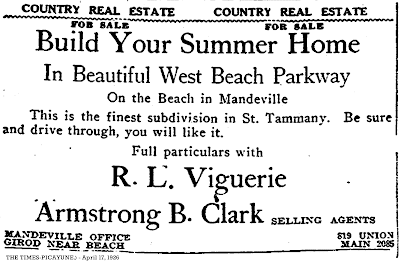 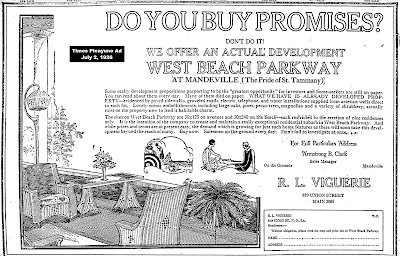 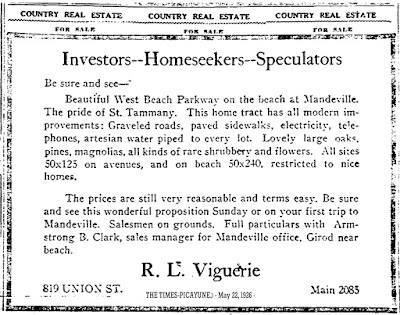 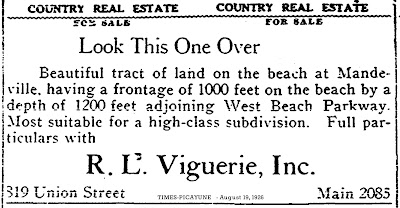 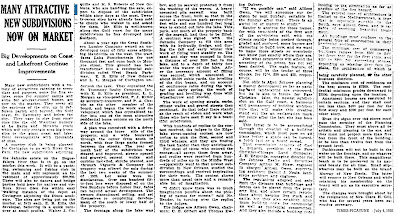 Text from the above newspaper article from July 4, 1926:
Many Attractive New Subdivisions Now On Market

Many new subdivisions with a variety of attractions catering to every class and purpose, some for fine estates, some for summer camps and some for all-year-round homes, are now on the market.
They cover all the environs of the city, up in Jefferson Parish and beyond, the Gulf Coast, St. Tammany and below the city. They vary in size from small ones like the old Warringer nursery at Le Barre and Metairie Roads which will only contain nine big homesites to the giant coast and lakefront developments with thousands of sites.
Country Club
A country club is being planned for Covington to go with River Glen Park, the new subdivision adjoining the Jahncke estate on the Bogue Falaya River that is to go on the market this week. It will be a yachting, swimming, and fishing club in the main and will represent an investment of approximately $30,000.
There will also be dances and bridge parties held here for natives and visitors. River Glen lies within easy walking distance of the depot at Covington adjoining the Dixon academy. The sites are being put on the market at $475 each. E.B. Ellis, the developer, believing in a quick turnover at small profits.
Walter J. Coquille and H. S. Roberts of New Orleans, who are handling the sale, expect to dispose of the subdivision within sixty days at the most. Twenty-seven sites have already been sold to clients who walked in and asked for them. Mr. Ellis is well-known along the Gulf Coast for the many subdivisions he has developed near Gulfport.
West Beach Parkway
About a year ago the Great Southern Lumber Company owned an undeveloped tract of fifty acres adjoining Mandeville on the west. The Tract faces Lake Pontchartrain for one thousand feet and runs back to Monroe Street. This ground has been transformed into a residential subdivision called West Beach Parkway. E. B. Ellis of New Orleans and L. L. Morgan of Covington undertook the task.
The organized the St. Tammany Realty Company, Inc. with E. B. Ellis as president, L. L. Morgan as vice president, F. J. Keller at secretary-treasurer, and P. O. Chopin as the other member of the board, and began the work and development which has crystallized today into one of the most attractive residential home centers on the north side of the lake.
A plan was conceived with a driveway around the inner side of the property, and a wide boulevard through the center from south to north, with four large parks formed between the streets. The rear or north half of the subdivision was cleared and improved, streets opened and graveled, cement walks, and curbing installed, shrubs planted, and through Viguerie & Company, the property was offered for sale during the last two weeks of summer of 1925.
Lot sales were instantaneous. Over one hundred fifty-foot lots were disposed of on the two Sundays before Labor Day. The owners discontinued selling, and set themselves to completing development of the south or lower half of the property.
Lakeside Park Area Filled With Dredged Material
The frontage along the lake was low, and no seawall protected it from the washing of the waves. A heavy creosoted pile seawall was built across the front, built so that in the center a recreation park seventy-five feet wide and one hundred feet long water to extend out into the lake.
This park, and much of the property back of the seawall, had then to be filled. A contract was signed with the Jahncke Company to fill this area with its hydraulic dredge, and during the fall and early winter this work of filling went steadily on.
The sand and clay was pumped in from a distance of over 1000 feet in the lake and to a depth of thirty feet under the waters of the lake.
After the necessary amount of filling was secured, which amounted to about 30,000 cubic yards, the leveling of the dirt began, and on account of continuous rains during the winter and early spring, the work of grading and leveling was done with wheelbarrow and shovel.
The work of opening streets, curbs, cement walks and gravel streets then continued. So that today there stands as a result of vision and work what those who have seen it say it is a beautiful subdivision. 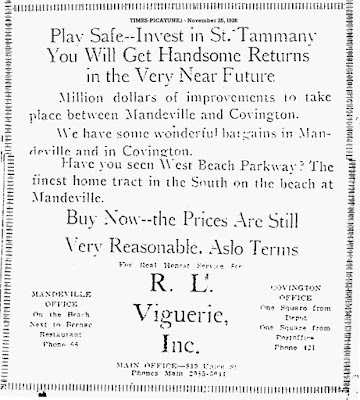 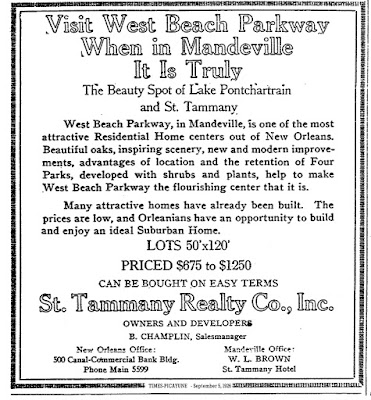 According to some sources, it was "The First Subdivision"

Several accounts state that West Beach Park subdivision in Mandeville was the first subdivision to be called as such in public discourse. It was recorded on July 22, 1925, and the local newspapers were full of news announcements of new "subdivisions" in St. Tammany Parish.

The year 1925 was a particularly banner year for buying large chunks of land in St. Tammany Parish and dividing up into lots, the classic definition of "subdividing." The lots of record in New Orleans were tiny, many of them only 25 feet wide, so when St. Tammany started offering lots 50 feet wide, that caught a lot of people's attention.

According to the Mandeville City Website, West Beach Parkway Subdivision, located in the Mandeville Historic District, was not part of Bernard de Marigny's original town plan offered at auction in 1834. However, with its incorporation in 1925, it was among the first developments in the United States self-identified as a subdivision."

De Marigny's original plan for old town Mandeville was a city plat all-in-one, as was John Wharton Collins all-in-one plat for old town Covington. The subdivisions came, as they do today, on the fringes of the town boundaries. Many subdivisions installed their own paved streets and water and sewerage facilities, and although costly at first, that encouraged neighboring towns to annex them into the city limits, thus taking over the maintenance of such facilities in most cases.

West Beach Parkway was a unique subdivision layout. "The site, designed as an oval, was never used as a racetrack as suggested by local tradition. The two main tracts were purchased in 1906 by the Great Southern Lumber Company from Louisiana Fontini and George Bierhorst. The Bierhorst Tract, Mon Plaisir, was a diary farm on which the owner built his home in the late 19th century, located at 306 East Street," the Mandeville website states.

"The St Tammany Development Corporation acquired the land from Great Southern. In a 1926 Times-Picayune article written by State Representative Thomas Berry, it was said "A seawall protects it from the lake. The front has been filled with 30,000 cubic yards of material by hydraulic dredges, a circular driveway made that it is a thing of beauty, cement sidewalks laid, shrubs, flowers and trees planted in the parkways. All the natural beauty was taken advantage of.....reaching back into a paradise of pines and moss covered oaks. It is far more beautiful than words can describe."

"The developers are constantly making improvements on this property," the newspaper account went on to say. "Even now there is a 1,400 foot Artesian well, and water has been piped to every building site, and will be furnished free for all time."

"Another strong feature that impresses one who sees the many cows and livestock that wander aimlessly over all property around here, was the strong fence and cattleproof entrance to the property. There are proper building restrictions and beach front privileges, even for those who bought the back lots; a seventy five foot park having been especially created for their use. Altogether there are four parks that have been developed with shrubs and plants.

"Balmy days on West Beach Parkway such as one might experience in Mediterranean resorts. Starlight nights when the cooling zephers caress the luxuriant foliage, and the tide beats a gentle cadence against the lakeshore beach. An Arabian Night's dream is to sit in the full glow of the Southern moon and drink in the exquisite beauty of this wonderful place called West Beach Parkway."

In a full page ad in the Times Picayune on January 20, 1926, Peter A. Chopin, President of The Citizens Homestead of New Orleans, said that St. Tammany, the lake and river section on the north shore of Lake Pontchartrain, is a very beautiful country, one that is just beginning to be appreciated.

"This is proved by the recent sensational sales of the West Beach Parkway, a subdivision of Mandeville, in which the better element of the people living in this community were the purchasers.

"The people of New Orleans are just waking up to the fact that they can have suburban advantages in St. Tammany for which they have been traveling hundreds and thousands of miles. I consider St. Tammany real estate one of the safest investments that could be made.

"Property values have increased a great deal during the past year, and this is only the beginning of what we will see," he concluded.

On July 12, 1926, the Times Picayune reported that "several houses are being erected in West Beach Parkway, Mandeville, the subdivision which was opened last year. The tract has been laid out into streets and parks retaining nearly all of the old oak trees. No houses are allowed in this subdivision costing under $2500." 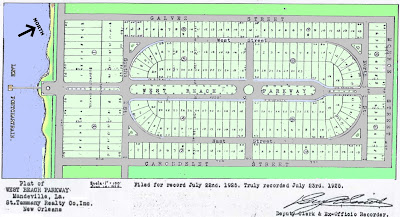 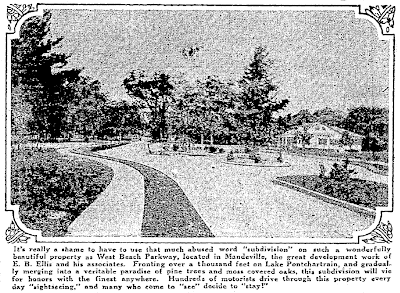 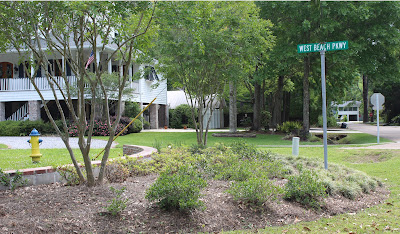 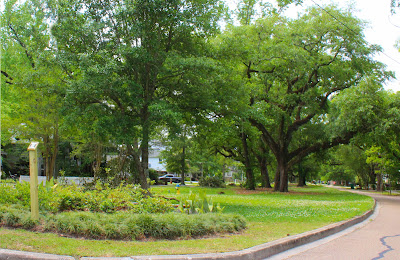