The School That Never Was

Today the C. J. Schoen Administration Building occupies an entire block on Jefferson Avenue in Covington, formerly the site of Covington Middle School and C.J. Schoen Middle School. It now houses the central office of the St. Tammany Parish Public School System. That three story brick building was constructed in 1914. But it wasn't the first building located on the grounds.

Actually the first building was a large wooden pavilion, owned by the city, with one big room and a school classroom tucked into each corner. The structure was also used for other gatherings and special events.

The city knew that its residents wanted a better school, however, one with a drinking fountain and decent bathrooms. A  small brick school building was funded, plans were drawn, and work began. It was never finished, however. Here is the story of that unsuccessful attempt to build a city-owned school building where today stands a parish-owned three-story brick school building. 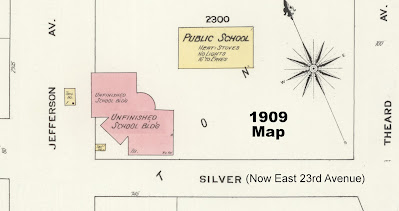 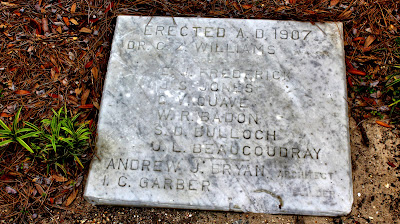 The cornerstone of the unfinished school.

Text from the above document:

The School That Never Was

Before 1900, there were many small private schools dotting the vast expanse of western St. Tammany Parish. Each only housed a few students. These small schools opened and closed on an amazingly flexible schedule. This was probably due, in part, to the agricultural nature of the community at the time. It was common for a school teacher to reside in various homes in the community, moving from home to home every two or three months throughout the school term. A meager $30.00-a-month salary was an average wage.

Covington City Hall records report as far back as November, 1901, a petition was made requesting that a three mill property tax should be raised and "used for the erection of a public school and for public educational purposes in this municipality."

Thus, a wooden pavilion was built, with each end being dedicated for public school purposes. The structure was nothing more than a roof with four walls. It was used for other things as well, such as social events and dances, yet it was the first stepping stone to public education in Covington.

The building had no "necessities" [privies] and no running water. Drinking water was carried in buckets from a house across the street and everyone drank from the same bucket and dipper. The pavilion had four classrooms, one "in each corner of the pavilion...30 [feet] by 30 [feet]".

Miss Schiller, the first principal, was also the third grade teacher. By April 1902, city ordinance gave the school board absolute control "of said part of Ethel pavilion" and authorized a committee to "order material to build necessary closets and to put down a pump well."

The townspeople eventually became disenchanted. They wanted a larger school made of brick . A special election was held to incur a debt of $18,000 to construct and erect a public school house within the town of Covington.

The mayor was authorized to "sell a square of ground with its buildings and improvements thereon known as the school house and bounded by Jefferson and Theard, Silver and Gold, for the sum of $1,000."

At that time, the town, rather than the parish or the state, supplied the revenue for building schools. Plans were made for a small brick school building to be constructed where the present day flag pole now stands. In 1907, when the walls of the school were approximately 3 feet high, the town ran out of money and the contractor went bankrupt. All supplies and materials had to be sold and plans had to be abandoned.

In 1985 contractors almost obliterated the cornerstone of that 1907 attempt, an engraved plaque that read:

Times had changed. The parish, rather than the city, came to assume responsibility for building schools. The School Board was able to officially buy the current location for $1000, with the understanding the property would be returned to the city of Covington if it ever ceased being used for public education.

Research for the above account was provided by the students and teachers of C. J. Schoen Middle School. 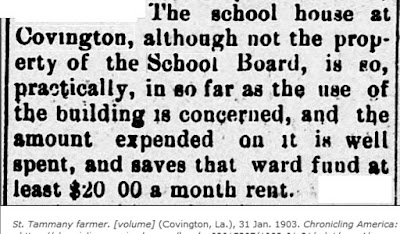 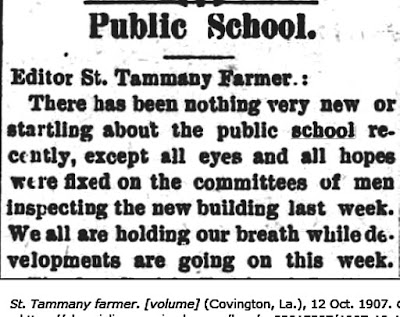 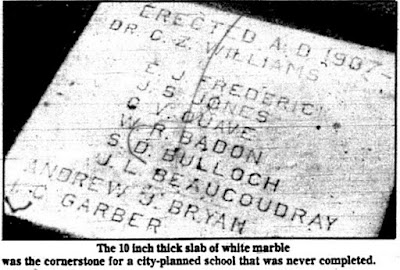 Maybe they went over budget due to the 10-inch thick marble cornerstone.