Southeast of Slidell, in the middle of the Pearl River Swamp near the U.S. Hwy. 90 and La. 433 intersection, lies Prevost Island, a somewhat legendary oblong-shaped piece of dry ground, steeped in history and shrouded in mystery. The land is from five to 10 feet above sea level, the highest topographic feature for miles around. It is surrounded by marsh.

Over the years it has intrigued many Slidell area residents, especially when aerial photos became available showing a perfectly round water pond on the property. 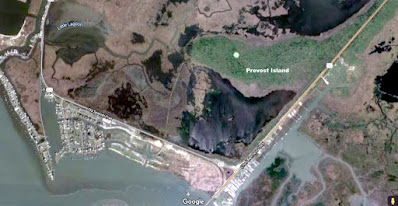 Click on the image to make it larger.
The Hancock County (Miss.) Historical Society website quotes a research paper by Marco J. Giardino and Russell B. Guerin that says, "In 1776, during the period when most British land grants were just being awarded along the Pearl River, William Bartram explored the mouth of the Pearl River by boat from Mobile. He wrote that “an aged Frenchman ( like Jean Claude Favre) bound for his Pearl River Plantation” accompanied him on part of his journey. Before Bartram could explore the river itself, he became ill and was forced to recover at the home of an Englishman named Rumsey, who lived on Pearl Island, a six mile stretch of sandy plain and salt marshes at the Lake Borgne end of the Rigolettes ( This was most likely Prevost Island – Francis Harper) (Weddle 1995:59-60).
In the 1890's it was a well-known agricultural concern owned by the Prevost family.

Click on the above image to read the 1899 news item about Prevost Island. The text of the clipping is listed below:
Prevost Island, which Mr. James Prevost is converting into a stock and fruit farm under the management of Mr. K. W. Little, of New Orleans, is still being improved.

A new fence has been placed around the portion formerly known as Weems', and contractors will soon complete a dwelling for employees, and an artesian well.

The Island, with its splendid live oak trees and expanse of prairie and marsh is naturally a most picturesque place. Mr. Prevost has many co-parish neighbors who wish him success.

Among the persons who frequently take a buggy trip to Salt Bayou to fish,are Misses Olivia and Lena Provost of this ward. St. Tammany Farmer- June 3, 1899. 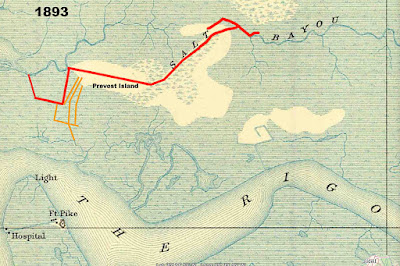 A 1893 topographical map shows when roads went to and around the island. The road network went to Salt Bayou and over to Little Lagoon.
In 1901 there was a series of classified ads in the newspaper telling of rewards for finding cattle lost, strayed or stolen from Prevost Island. 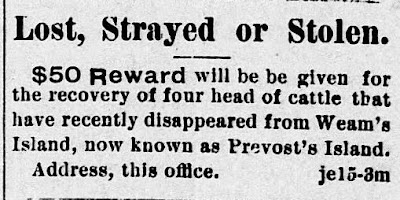 Load of vegetables brought to newspaper office - 1909
In 1911, it was described as the site of one of the finest orange and pecan groves in the nation, treasured for its agricultural potential. 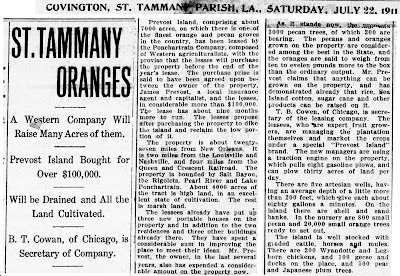 Click on the image to make it larger.
Excerpts from above article:
Prevost Island Bought for Over $100,000; Will be Drained and All the Land Cultivated.
Prevost Island, comprising about 7000 acres, on which there is one of the finest orange and pecan groves in the country, has been leased by the Pontchartrain Company, composed of Western agriculturalists, with the proviso that the lessees will purchase the property before the end of the year's lease.

The purchase price is said to have been agreed upon between the owner of the property, James Prevost, a local insurance agent and capitalist, and the lessees, is considerable more than $100,000. The lease has about nine months more to run. The lessees propose after purchasing the property to dike the island and reclaim the low portion of it.

The property is about twenty-seven miles from New Orleans. It is two miles from the Louisville and Nashville (railroad), and four miles from the Queen and Crescent Railroad. The property is bounded by Salt Bayou,the Rigolets, Pearl River and Lake Pontchartrain. About 4000 acres of the tract is high land, in an excellent state of cultivation. The rest is marsh land.

The lessees already have put up three new portable houses on the property and in addition to the two residences and three other buildings already there. They have spent a considerable sum in improving the place to meet their ideas. Mr. Prevost, the owner, in the last several Iyears, also has expended a considerable amount on the property now.

As it stands now the property has 3000 pecan trees, of which 200 are bearing. The pecans and oranges grown on the property are considered among the best in the State, and the oranges are said to weigh from ten to eleven pounds more to the box than the ordinary output. Mr. Prevost claims that anything can be grown on the property, and has demonstrated already that rice, Sea Island cotton, sugar cane and other products can be raised on it.

The lessees, who are expert fruit growers, are managing the plantation themselves and market the crops under a special "Prevost Island" brand. The new managers are using a traction engine on the property, which pulls eight gasoline plows, and can plow thirty acres of land per day.

There are five artesian wells, having an average depth of a little more than 200 feet, which give each about eighty gallons a minutes. On the island there are shell and sand banks. In the nursery are 800 small Pecan and 20,000 small orange trees ready to set out. The island is well stocked with cattle, horses and mules. There are 200 Wyandotte and Leghorn chickens, and 100 geese and ducks on the place, and 500 pear and Japanese plum trees.
End of 1911 Article 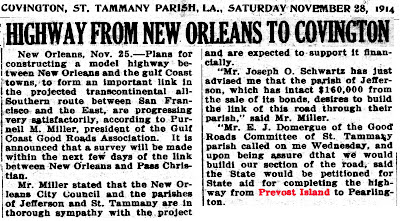 In 1914, Prevost Island was going to be part of the new main highway from Chef Menteur to Pearlington, Miss.
Ranchers and farmers tried growing all kinds of crops and raising all kinds of livestock

In 1917, Prevost Island was chosen for a large cattle operation. 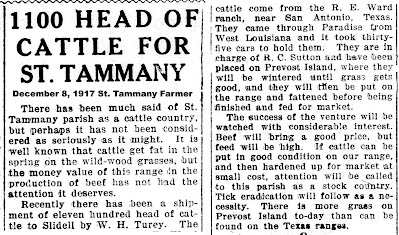 Up-to-date farm update: May 25, 1918. Text of article below:
A Successful Up To Date Farm
St. Tammany Farmer May 25, 1918
Prevost Island—Leaving St. Joe, the way lies through a splendid pine forest, good hard road, and then on through stately oaks with clinging moss, lights and shades always a cool spot on the hottest day, passing from swamp to a magnificent pecan grove of over 16,000 trees.

Growing between the trees and over other parts, intensive cultivation is the order of the day, and oats, corn, velvet beans are seen in all stages of growth, and at the proper time harvested by five hundred head of well-bred hogs. The place is owned by Messrs. Geoghagan, of New Orleans.

Mr. George Ciko is manager, and he seems to have a thorough knowledge of hog raising. All the herd have been inoculated by the simultaneous treatment, which renders the hog immune for life from cholera. Labor shortage is felt very keenly here, as in other places, and crops are grown that the hogs can gather, with homemade self-feeders, running water, oiled bathing places, and above all water transportation.

A short run of four hours will place the farm product in New Orleans, and less by rail north. There is in addition some five or six hundred fine, healthy chickens in all stages of growth, five hundred laying hens, five hundred goats and a fine stock of cattle. Mosquitoes are very bad at times, but the stock are protected by screened quarters, have plenty of good hay, etc.

Every kind of up-to-date farming implement is here from the caterpillar tractor that roots up trees and stumps to the small walking plow.
Cultivation among the pecan trees requires careful work, and it is very questionable if the growing of crops like oats do not injure the trees. There are few crops that take more plant food from the soil than oats, and nothing is 'better for the trees than legumes. particularly cow peas. 'the writer has seen such splendid results from growing cow peas in a pecan grove and it is a pity that it is not more widely practiced.

There must be over 150 acres in food crops and it looks like a successful business proposition and may we have more farms like this in the parish.
End of 1918 Article
In 1921 Prevost Island and much of the area around it was sold to Southport Mill Ltd. 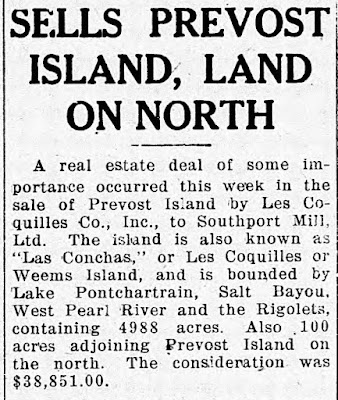 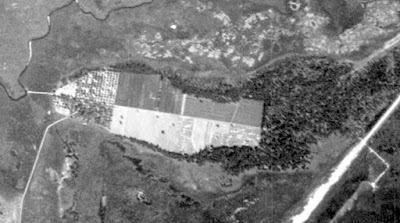 Farm operations still in evidence in 1952 aerial photo
The distinctive round pond seen in the first color photo did not show up on the 1952 aerial photo, which indicates Prevost Island was being still being used for agricultural and livestock purposes after that time.
In the 1920's and 1930's  Percy Viosca Jr., a noted Louisiana conservationist, visited the Island and took numerous photographs. 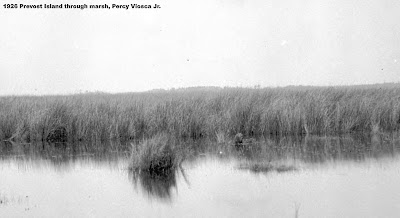 Two photos by Viosca in 1926, above Prevost Island in the distance 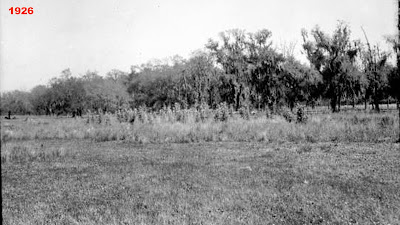 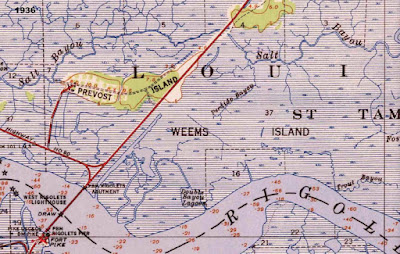 The 1936 topographical map showing the old roadbed across the island
A number of hurricanes have devastated the island and its manmade structures over the years.  A hurricane flooded the area with salt water during the 40’s which killed the attempts to grow rice. 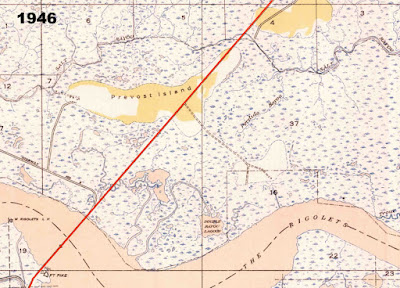 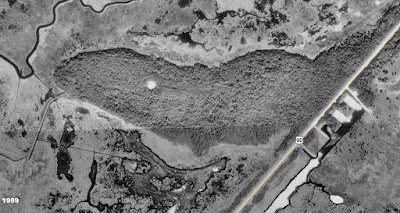 Want to take an aerial drone tour of Prevost Island, complete with music? CLICK HERE for a YouTube video.
Information Sources: some information in this blog article was found on the Remember Slidell Facebook page, with comments from several persons who remembered visiting the island over the years.  A more detailed history of the island is being compiled from historical documents.
For a link to a Google Maps view of Prevost Island, CLICK HERE. 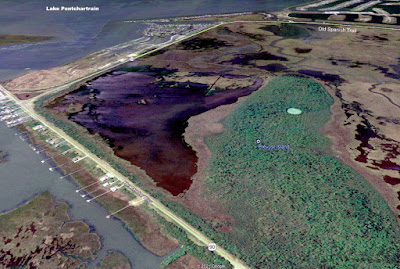