In the summer of 1916 a harrowing flood destroyed many buildings in Covington and the surrounding area, resulting in a number of stranded residents and daring rescues. The rains came after a hurricane hit the Gulf Coast, and while the wind didn't do much damage, the downpours flooded downtown Covington.

The news articles from the time provided plenty of accounts of heroic rescues and narrow escapes, with names given of the many local people involved, both victims of the rising waters and those who saved them from drowning. A full text of the article is reprinted below. Click on the image to make it larger.

Here is a transcript of the article.

The threatened storm caused considerable anxiety Wednesday among those who passed through the storm last September, and as night drew near and the wind increased a number of families sought safety in the new Southern Hotel, among them being the Gritomer, Pechon, and Kornfield families. There were others who went to the houses of neighbors, taking consolation in company.

But while there was a pretty stiff wind, little damage was done. Outside of the blowing of a tree on the roof of the Coco residence on 21st Avenue and the breaking of a few limbs from trees, no damage has been reported in Covington. Telephone lines were damaged to some extent, but there was one good line to New Orleans.

The excursion train to New Orleans on the N.O.G.N. reached Slidell at 7 p.m. and had to remain there all night, reaching New Orleans at 7:30 Thursday morning. People were unable to get anything to eat, as the hotels had only enough for their own guests, and everything the butcher boy had was soon disposed of. One man got a hot pot of coffee and divided it as far as it would go, so it was a hungry bunch that reached New Orleans.

The boat could not make the trip back from New Orleans and was tied up there. The large stores in New Orleans dismissed all the girl clerks at 12 o'clock Wednesday noon, but the men came on at night to watch the stores. Many people went to the federal building for safety.

Thursday evening a heavy rain storm set in and up to 11 o'clock Friday morning. In fifteen minutes after it commenced, the  streets were flooded in the lower sections of the town. The rainfall was exceedingly heavy, probably one of the heaviest occurring in this section since 1899.

The schooner Ross A. was washed from her moorings at Covington and was swept down the river, but the mate went after her and succeeded in getting her anchored.

Mr. Scheff, a boy about 14 years old and the driver were carried from the road at the end of the Covington bridge while attempting to cross in a surrey. A rope was thrown to them and all were saved, but it was a narrow escape. The horse was gotten out, but the surrey was washed away in the swift current and may never be recovered. The Covington bridge was underwater for the first time.

Rain stopped about noon Friday. Water commenced to rise rapidly. The N.O.G.N. trestle across Bogue Falaya River was washed completely away. The motor car trestle across the same stream washed away. Water covered the traffic bridge to top of guards and in the afternoon, it was swept away.

Water was in the houses on Kempter St. and the lower part of Boston St. from two to four feet deep. Water in the office of the St. Tammany Farmer office was twenty-four inches deep.

Mr. Bryne, on the old Voss place on the Military Road, offered by telephone $100 to anyone who would take him off. Place surrounded by water. No way to get to him. Calls for help also came from the direction of Dr. Tolson's. Mrs. Bowman and four children were brought in from near the bridge by boat. Some people were taken from the Charropin place in Covington. Mr. Bryne was subsequently rescued by the Edgars. 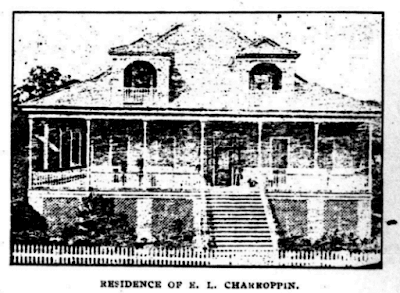 Families Flee Flooding
Still thundering and threatening to rain again, the water continued to rise. Oldest inhabitants have nothing to say about ever seeing higher water. Pharris family, opposite the Farmer office on Boston Street, have just been taken out of the house in a boat at 2 p.m. The Farmer force ate dinner at 12 and got there dry footed. Waded in water returning from dinner.
Water coming up on steps at 1 o'clock, but family refused to leave then. Water coming into the Farmer office at 3 p.m. Motors detached and lifted on tables and machinery protected where possible. Waded four feet of water to get to Ostendorf residence, seventy-five feet away. This home is raised about six feet from ground.

Water Reaches Several Feet Deep
Water came to within a foot of gallery floor up to 10 p.m., after which it began to recede and passed away as rapidly as it came, the streets being clean of water before 6 o'clock in the morning. Water marks in the Farmer office showed 24 inches of water had stood in the building. Damage not over $100.00

Besides the Charropin family, fourteen teachers of the Summer Normal School were removed from that residence in boats Friday afternoon. Teams moved boarders from the Blattner place. Mr. and Mrs. Blattner and several boarders refused to leave and had to perch on window sills and any high place they could find, while the water came up to the beds. Mr. Limongi, the Multally Place and other residences toward the river were flooded until the furniture floated around. Other families on Boston Street moved out before the water came into the yard.

In the lower part of Old Covington, near the Tolson place, there were exciting scenes. Mr. Ned Barringer moved his family from his home, which then had three and one-half feet of water in it, to the Weaver residence. He had to carry his four children and his wife, one at a time, through water reaching to his chest. He then joined a rescue party, after he had recovered from the fatigue of his trip through the water. 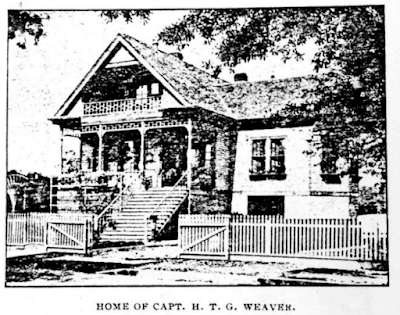 Sidney Fuhrmann brought a skiff on his motor truck and F.F. Planche and Joe Woods rescued the Bear family. They were joined by Mr. Barringer in an attempt to rescue the Allain family. Mr. Barringer tied 1000 feet of rope to the boat and an attempt was made to let the boat down the swift current to the house. The boat was dashed against the trees and upset, throwing Woods and Planche out of the boat. The boat was righted and the trip was made to the house by holding to the trees. Three women, one child and two servants were taken to safety.

Barringer, Planche, Woods and Molloy took Mr. Pollock from his bed, where he was in a dying condition, being a consumptive, and carried hm to safety. The water had reached his mattress. Mr. Pollock died Saturday morning. This is the only death during storm.

Community Pulls Together in Rescue Efforts

Southern Hotel Shelters Those Flooded Out

It is estimated that two hundred people found shelter in the New Southern Hotel. The convent and other places offered shelter to quite a number. 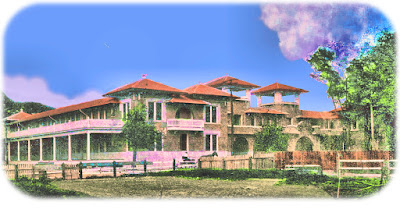 Father Koegeri was waist deep in water at his home, and waded around as if he did not mind it much.

The Tchefuncte bridge is still underwater, if it is there at all. Goodbee bridge and the bridge near Loret's are gone.

The rescue party, working with a rope, because the current was so strong that no boat could withstand it, had some thrilling experiences. Herman Schultz, who was clinging to the rope, was washed against it and whirled around it repeatedly, until it was thought he would be drowned. Mr. Barringer and Mr. Planche had experiences which they will not soon forget, in the difficult work of rescuing the water-bound people.

The park pavilion was washed away and the M.C.B.'s lost their new piano, the last payment on which was to have been made by the receipts of an entertainment to be given at a later date. The park was badly washed and damaged.

Quite a lot of pigs and chickens were washed away by the swift current. The water is said to have risen five feet an hour, making a rise of twenty feet in four hours, taking the measurement from the level of the river at the time the rise started.

Abita Springs had some houses flooded near the river. Two bridges were washed away and the approaches to the concrete bridge was washed away. The railroad trestle was not much damaged and it is stated that the train will be able to run to Claiborne by the evening (Saturday.) 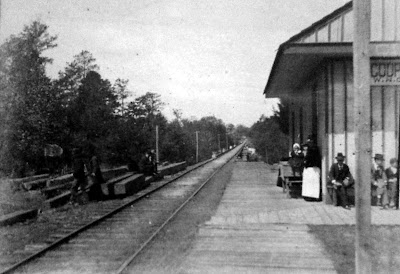 The train depot at Claiborne Station

It is difficult to learn what the damage to crops is. At Ramsay bridge to St. Joseph's Abbey was washed away. Slidell and Mandeville did not suffer at all. 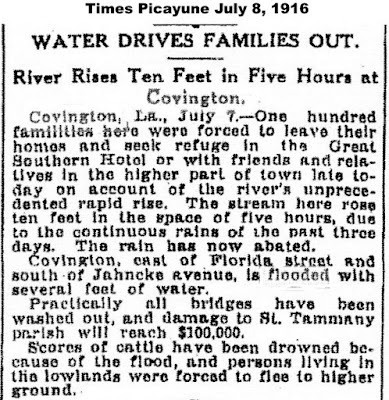 The 1905 Booklet Published About Covington