In 2009 Slidell High School celebrated its Centennial Year with a special gathering honoring the history and heritage of the school. Centennial Day festivities included a parade around the campus, special musical presentations, and a tribute to former Principal L. V. McGinty, Sr. A large number of alumni of the school attended, including several School Board members. 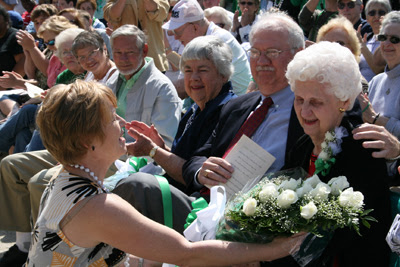 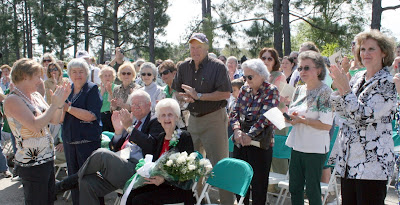 Crowd gives Mrs. McGinty a standing ovation.
Slidell High School was the only high school in the area until the late 1960’s, and many present-day members of the community graduated from the school.

Among the special guests at the Centennial event was Mrs. Elinor B. McGinty of the Class of 1931 and wife of the late Principal McGinty. A video program produced by Channel 13 was shown in the auditorium, detailing Mr. McGinty’s many contributions to the school during the 40 years he served as teacher, coach, and principal between 1931 and 1976. 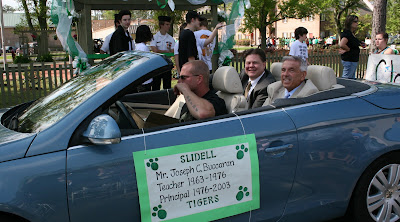 Trey Folse and Joseph Buccaran
A specially-designed Centennial Garden was dedicated. The  garden is located at the front entrance of the school and contains plants, trees, a performance area, and wood decks. Bricks honoring many graduates were engraved and placed in a memorial circle in the garden area, which also serves as a meeting place for concerts by the band, performances by the choir, and special event day programs.

The special day’s event featured a Centennial cheer and dance by the cheerleading squad.

Special guest Matt Forte, a player with the Chicago Bears football team and member of the Slidell High Class of 2004, met with guests in the gymnasium, and the popular area band Vince Vance and the Valiants performed on the main stage at the gala. Current and past members of the Slidell High Jazz Ensemble also entertained those attending. A variety of school memorabilia from across the years were brought in by alumni and put on display in the library. 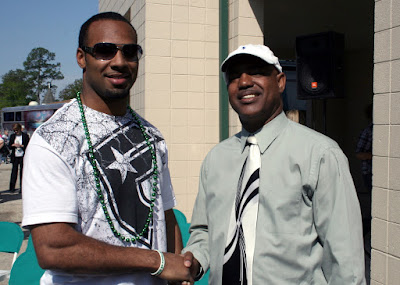 Matt Forte and Ray Alfred
The Centennial Year’s events started with a Heritage Festival on July 4, 2008, continued with a homecoming pep rally, football game and dance in mid-October, and an Olde Towne Alive “Birthday Party” in November, which was accompanied by a parade and musical performances.