The Division of St. John Becomes a Historic District

In 1982, the City of Covington filed an application with the National Registry of Historic Places asking that the "Division of St. John," Covington's historic downtown area, be placed on the national register. It was granted that status in December of 1982. Here is the text of the application that outlined the historical narrative of the Division of St. John, its unique characteristics and its importance to the development of the area. 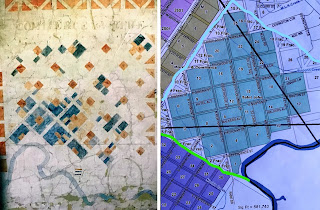 "The District of St. John, the original portion of Covington, comprises both residential and commercial structures largely dating from the late-nineteenth and early-twentieth centuries. Founded in 1813 by John Wharton Collins, the original twenty-seven symmetrical blocks were laid out on a grid system oriented to the Bogue Falaya River. The present district boundaries encompass twenty blocks, the remainder of the original planned grid.

"Collins employed an unusual urban planning scheme in laying out the district. Each block, measuring 360 feet square, was created with a small central square which connected to the street system by alleyways. These areas of 120 feet square were to be held in common. They became known as oxlots, undoubtedly because farmers and merchants, would tether oxen and livestock within the sites. Today the oxlots constitute more than nine acres of open space within the urban area. 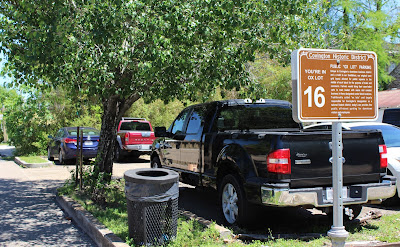 "The ox lots continue to play a major role in Covington's historical landscape as a unique urban design. The 20 blocks within the current district boundaries were all planned with ox lots. Of these, only 2 blocks contain large intrusions. The surviving 18 ox lots have varying degrees of encroachment, with nine largely unintruded upon, and one completely pristine. Therefore, this unusual resource remains over 60 percent intact. The mere survival of these urban spaces is remarkable, as they could have been easily eliminated or obliterated. Careful evaluation of the existing encroachments reveals that the ox lots are still essentially open, and have retained their confined, semi-naturalistic character. These spaces are a major component Covington's cultural and historical assets, which must be recognized in the unifying pattern of architecture and the landscape.

"Despite the fact that Covington was founded and laid out in 1813, virtually all extant buildings are post-1880 due to two major fires which destroyed much of the district.
Subsequent redevelopment booms in the lumber and "ozone" resort industries precipitated architectural growth in the late-nineteenth and early-twentieth centuries. 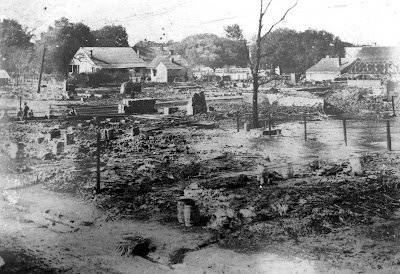 The application documentation stated that there were 246 structures in the Division of St. John, also noting that 2.5 percent of those buildings (six) were constructed prior to 1880,  some 163 structures (66.2 percent) were built between 1881 and 1930, and 77 of those buildings (31.3 percent) were built between 1931 and 1982. The newer buildings found in the Division of St. John that were considered to be "intrusions" into the more architectually historic structures were determined to be minor and generally in character with the downtown area.

"The existing structures in the District of St. John integrate residential and commercial usage. The major concentration of business activity developed in the vicinity of the Southern Hotel and the New Orleans-Great Northern Railroad, extending eastward. 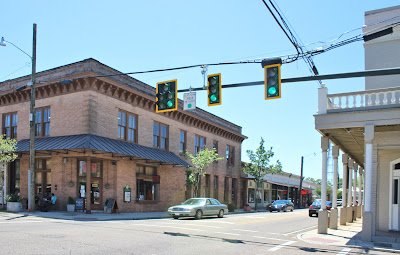 The buildings are principally one and two story brick structures with recessed storefront entries, fixed awnings, and arched windows remotely derived from the Victorian Renaissance Revival. Limited to a central six block area, these buildings are closely spaced with no setbacks. Many former domestic buildings adjacent to this area have been adapted for commercial use, which provides a diverse streetscape image.

"The Covington central business district represents the best and largest example of a turn-of-the-century commercial district in St. Tammany Parish. It presents a locally outstanding historic environment, containing many fine surviving structures. The architectural significance of the district is reflected in the buildings' character and early-twentieth century image. The low and intimate streetscape scale is established by a predominance of one and two story structures, local landmarks such as the Southern Hotel, and the unifying element of existing trees. Incidents of typical architectural features, including shaped parapets, false fronts, brick pilasters, and ornamental cornices, further enhance the ambient image. 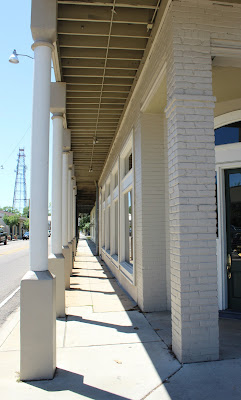 "The survival of these commercial buildings, with their similar color, scale, materials, and proportion, provides a sense of continuity in downtown Covington. Intrusions are generally of low scale and often masked by trees. Thus they tend to conform to the streetscape. Several new buildings successfully reproduce traditional architectural forms, thereby enhancing the historic environment. 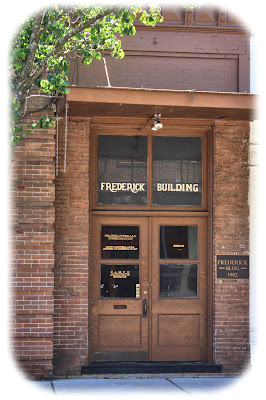 The overall image of the business area is characterized by features such as brick pilasters, rectangular double hung windows, arch lintels, molded cornices, and pressed tin facades. Commercial Covington presents the typical flavor of a small town central business district of the early part of the 20th century.

"American settlement patterns in the pioneer era generally developed on a grid system. Very few plans made provision for open, public green spaces within the urban fabric, such as the northeastern village cannon. Despite exceptions like Savannah, most southern towns adopted the grid pattern. The only acknowledgement of public space was generally seen in the courthouse square. But even this was the exception rather than the rule.

"Against this background, Covington takes on national importance as a unique solution to the problem of providing collective urban space. According to one of America's leading urban planning historians, John Reps, not only is the ox lot scheme unique and unprecedented in this country, but does not appear to have any European derivation. 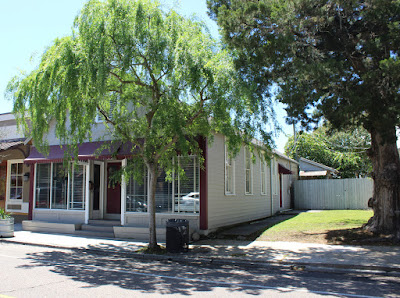 Despite the lack of documentation concerning Collins' purpose or intended use for the ox lot plan, its configuration is significant in the history of open space design. Covington takes its place among a small, select group of innovative and experimental urban planning schemes in pioneer America.

"In addition to urban planning, Covington is significant on the local level in the area of architecture.

"The district's residential sections presently tend to be located on the periphery of the commercial area, reflecting c. 1910 growth patterns. These buildings consist largely of one and two story wooden structures, the majority having front porches. An intimate streetscape scale is established with average lawn setbacks of 10-15 feet and porch spaces. The spacing between houses is often less than the average facade width, although several homes maintain expansive lawns. 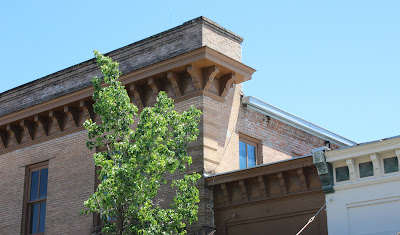 This rhythm of voids and solids is enframed by many mature native trees, most notably majestic live oaks. Residential architecture in the district reflects housing types rather than styles. Most of the dwellings were constructed without architects; therefore interpretations of favorite local house types were prevalent. Builders generally copied basic forms, with selected embellishments used to express individual preferences and current fashion.

Residential Buildings""Covington's residential architecture represents a locally outstanding example of a turn-of-the-century neighborhood. The area contains a high incidence of intact structures in sufficient quantity to characterize the district with variety and richness. The intimate streetscape scale is complemented by many live oaks.

"The existing domestic architecture in Covington consists of frame buildings influenced by popular late-nineteenth century styles. The Queen Anne Revival appears with projecting bays, shingle patterns, and multi-gabled roofs. Eastlake ornamentation is seen, characterized by complex and stylized porches and balustrades. The majority of domestic structures have retained their original facades and detailing. Residents have become aware of the restoration and preservation movement, resulting in the retention of characteristic ornamental and architectural forms. The few intrusive dwellings are in harmony with the streetscape scale. The comprehensive image of the residential neighborhood reflects its late-nineteenth and early- twentieth century heritage."

"Covington was founded in 1813 by John Wharton Collins, a New Orleans merchant of English descent who had emigrated from Philadelphia soon after the Louisiana Purchase. In May 1813, Collins purchased some 1600 acres lying in the fork between the Bogue Falaya and Tchefuncte Rivers from Jacques Drieux, a New Orleans Creole who had acquired the land by grant from the Spanish government in 1803. Prior to this transaction Collins had staked a claim with the Spanish government to all land lying between the Tchefuncte River and the Drieux tract. Taken together these two parcels of land constitute the major portion of present-day Covington.

"In July 1813, Collins laid out the squares, streets, and lots in what he called the Division of St. John and dedicated the town, which he named Wharton, to Thomas Jefferson. In 1816, Collins was awarded a charter by the legislature, but the name was changed to Covington over his protest. This name was given to honor General Leonard Covington of Natchez, a hero of the War of 1812."

The national register of historic places application went on to list architectural styles and estimated dates of construction for nearly 100 addresses in the downtown area and nearby residential sections, all within the Division of St. John. The application was prepared in 1981 by the Covington Historic District Committee, in care of Mary Lynn LeGardeur, and certified by Robert B. Delieux, State Historic Preservation Office, in 1982. 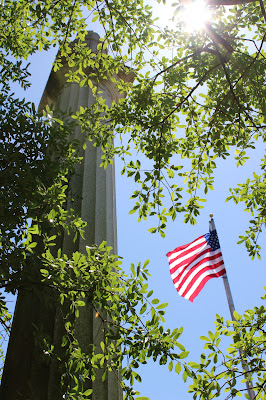 The War Memorial in front of the old courthouse 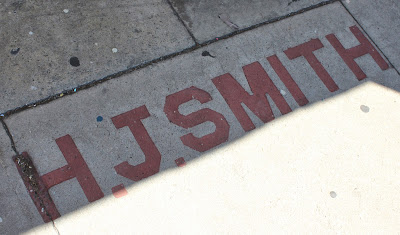 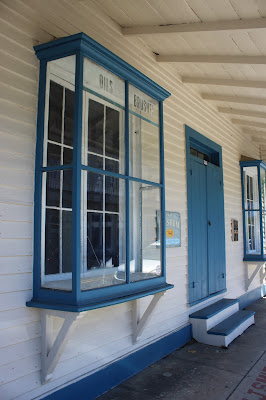 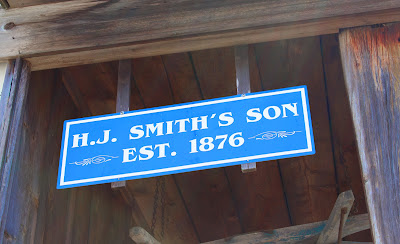 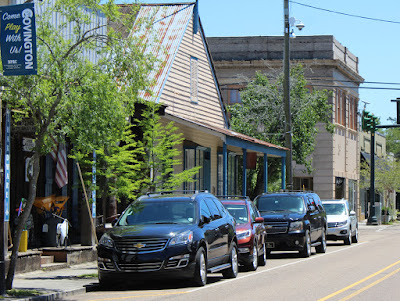 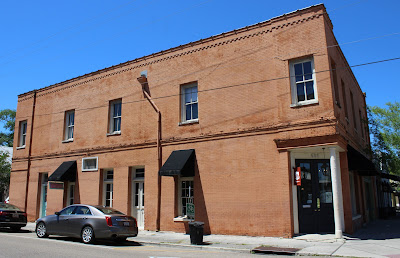 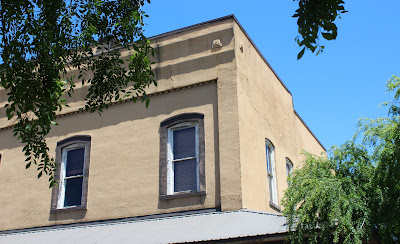 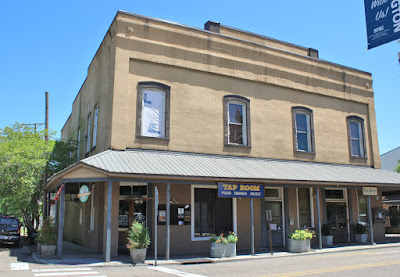 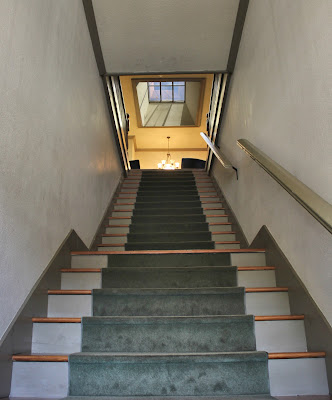 Some of the two-story buildings in downtown Covington have offices on the second floor which are accessed by a long staircase up to a reception area with a skylight. 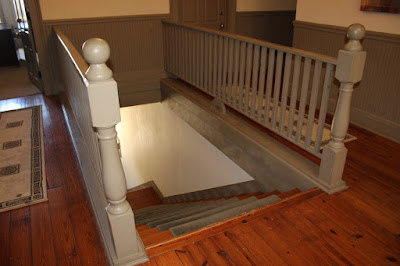 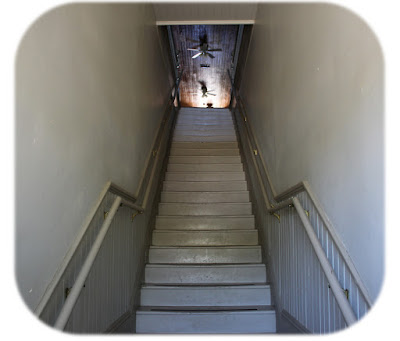 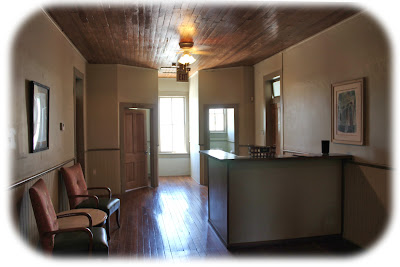 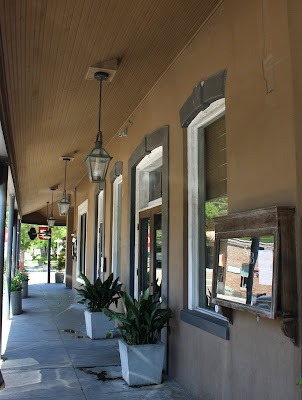 The chamber of commerce was in favor of the special honor: