The history of the L&N Railroad Company is intertwined with the history of St. Tammany Parish, and in 1953 Philip F. Burns of Covington wrote a letter to J. L. James, editor of the railroad's employee magazine, asking for details of that history.

As Mr. James explained in his letter to Burns, the magazine articles telling about the history of the L&N Railroad between 1850 and 1942 and also included information about what was called the "Pontchartrain Railroad."

Passenger service on the Pontchartrain was discontinued in March, 1932, wrote Mr. James, and the line was abandoned in 1935.

Some Facts About The Early Days of the N. 0. & M. Division,
As Related By An Old Timer To R. T. PRUITT, Claim Agent, New Orleans

ON A recent trip to Gulfport, Miss., I chanced to be talking with Mr. John H. Lang, a prominent undertaker of that city. Mr. Lang is 76 years of age, but he is hale and hearty and does not look a day over 50.

During the conversation he was twirling on his finger a key ring containing two keys, one of which attracted me by its well-worn appearance. Upon my inquiry, Mr. Lang tossed the keys to me with the remark that the old one was a box car key that had been in his possession for more than half a century—one that he had used in the days when he was a freight conductor on the old New Orleans, Mobile & Chattanooga Railroad.

It required but little urging to persuade Mr. Lang to recall some facts about the New Orleans and Mobile Division during the years when it was a whole railroad it­self, so here is the story as he gave it to me:

"The New Orleans & Mobile Division of the L. & N. Railroad Company was built and opened for traffic in 1869.

The track was broad gauge, with 60-pound rails; the cars had hand brakes, the coaches were small, the freight cars were 10-ton capacity and the locomotives were wood burners.

"The freight crews were composed of one conductor and three brakemen. Passenger crews had a conductor, baggageman and two brakemen. No overtime was paid. We had no callers or night opera­tors. 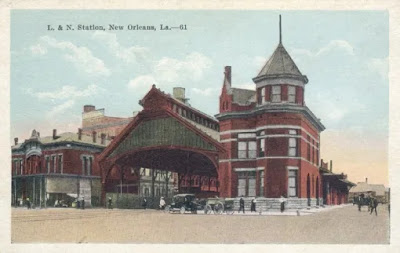 Speed of the Trains

The speed limit of freight trains was twelve miles per hour. The passenger trains ran in the daytime and the freight trains ran at night. At every station there were two woodsheds and a regu­lar wood train with a large crew was kept busy picking up wood along the line to keep the sheds supplied.

"When the old N. 0. M. & C. was built, the roadbed was made by dredging a canal through the marshes and dumping the mud on the south side of the canal. This mud bank soon settled and slid into the canal. Sheet piling had to be driven along the edge of the dump next to the canal for miles.

Some places 'follow' piles (one on top of the other) had to be driven before a foundation could be had. At the west side of Pearl River Bridge, hundreds of carloads of filling had to be used. Sometimes the whole line of piling would be pushed to one side by the weight of the filling.

"The roadbed was so low that high tides would overflow the track, and to prevent it from floating away, posts were driven down at intervals between the ties. A long iron bolt was driven into the top of each post and  used, then bent down over the cross tie on each side and fastened so the track could not float away.

"All of the small bayous had bridges over them. When the roadbed settled, these bridges stood about 18 inches above the roadbed, making it pretty rough riding and causing constant snap ping of links and pins.

"Because of such conditions, the expense of keeping up the road was very great. About 1873 it was placed in the hands of a receiver. The receiver put in as superintendent a man who had been a canal boatman with no railroad experience, and, of course, things were in a mess. The passenger fare at this time was 5 cents a mile straight.

When Worms Ate The Bridge Pilings

"The first bridges were plain pine piles driven without any treatment. They were soon eaten by the teredo, a wood-boring ship worm, and the Biloxi bridge dropped down with engine No. 5 and several cars in 1871.

Then they tried hewn heart pine, square at the top and bottom with the part between the top and bottom covered with metal over a felt wrapping. Yellow metal was used on Bay Bridge; zinc on Biloxi Bridge. Salt water corroded the metal which worked loose and dropped off.

About 1875 the creosote plant was established at West Pascagoula, where piling was treated and all bridges rebuilt. Worms soon began to get into those not thoroughly  treated. The tops were then cut off so that draw tiles could be put over them and filled with concrete. This was soon broken and then cast-iron jackets were substituted.

"After the L. & N. took the road over, the storm of 1893 destroyed the Bay Bridge, and several times later nearly all of the bridges have been destroyed by fire and storm. In July, 1874, all of the river bridges were washed away. During these devastating times, transfers had to be made by steamer. 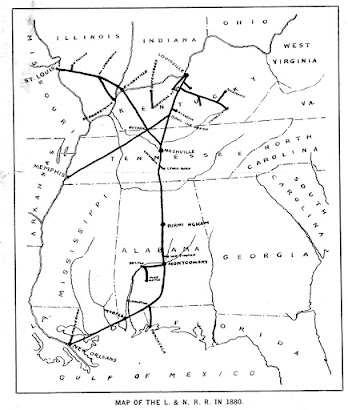 "I am giving these details from personal knowledge, having begun work on the old road in 1871 and resigned in 1878. The present generation cannot realize what changes have been made in rail­road transportation in the last fifty years.

"We used to go out on a run and try to get in in time to start out again. Running time for freight trains was twelve hours from New Orleans to Mobile, but in bad weather this schedule could not be made.

"There was no regularity in the size or height of cars or of the link and pin couplings or goose neck links. The cars in a train were six feet apart. I have had cars of ten different kinds and sizes, of ten different roads, and it was a tough job to get over them and handle them. It all seems like a dream to me now."

CLICK HERE to go to part two of the History of the L&N Railroad.