Bernard de Marigny not only had a hand in developing the town of Mandeville, but he and his family also sold the land in New Orleans for the right of way of the South's first railroad, the Pontchartrain Railroad, home to the fabled "Smoky Mary" locomotive.

The train, which ran 4.96 miles along Elysian Fields Avenue in New Orleans was the first railroad in the Mississippi Valley, according to a 1954 newspaper column written by the legendary Pie Dufour.

Dufour interviewed Francis P. Burns, legal counsel for the New Orleans Railroad Terminal Board, who said with some regret that the last few miles of track that once belonged to the Pontchartrain Railroad were now being torn up (in 1954), marking the end of the first railroad west of the Alleghenies. 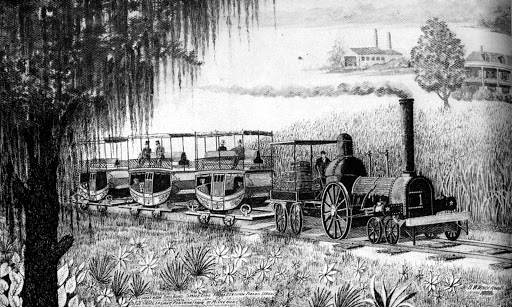 Artist Rendering of the Early Days of the Pontchartrain Railroad

The railroad moved hundreds of New Orleans residents from the central city to the boat docks at Milneburg on Lake Pontchartrain each weekend where they boarded the schooners and steamers and headed north to St. Tammany Parish. Once there, they looked around and started buying land in the Mandeville area.

So Bernard de Marigny did have a vested interest in seeing the railroad built.

Here is the Pie Dufour article. Click on the image to make it larger and more readable. 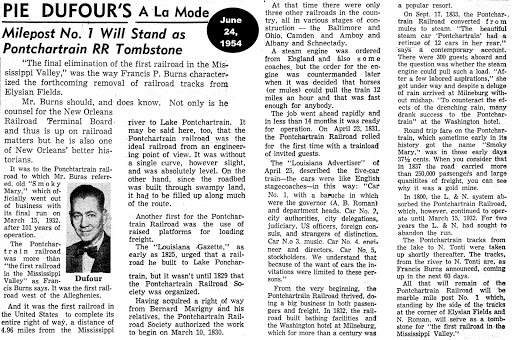 According to pontchartrain.net, "The railroad connected Lake Pontchartrain to the Vieux Carré, (along present-day Elysian Fields Avenue) and developed Milneburg Port at its terminus. While the port handled cargo from Mobile, the surrounding land soon became a resort area, initially with the Lake House tavern and Washington Hotel. Three bathhouses, other hotels and restaurants, camps, and saloons soon followed. Eventually, the name Milneburg connoted a resort area rather than an industrial port. 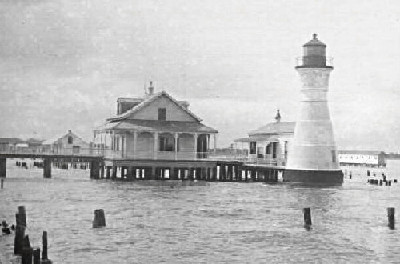 "In 1870, the port declined further when it lost much of its cargo to the New Orleans, Mobile and Chattanooga Railroad. The area evolved into an entertainment district, as the city's passenger train, the Smoky Mary, began carrying more middle-class visitors to the resort. Entertainment included jazz, with Sidney Bechet, Louis Armstrong and Danny Barker performing. Milneburg closed in 1930 after the development of a seawall that displaced several buildings in the resort. The site became the Pontchartrain Beach Amusement Park and the surrounding reclaimed land for the Lake Terrace/Lake Oaks neighborhood." 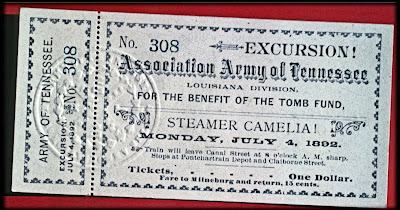 A ticket for an excursion aboard the Steamer Camilia, a round trip to Milneburg and back, on July 4, 1892. 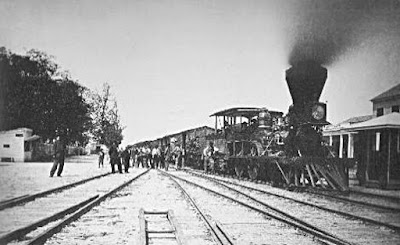 The Pontchartrain Railroad's depot at Milneburg 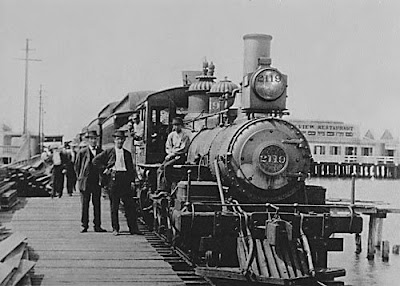 The later days of the Smoky Mary railroad, on the pier at Milneburg

In a 1939 article published in the L&N Railroad employee's magazine, it was noted that L&N (Louisville and Nashville Railroad) acquired the Pontchar­train Railroad around 1881, describing it as a "lilliputian carrier" some five miles long, which serviced New Orleans and Milneburg, on the shores of Lake Pontchartrain. 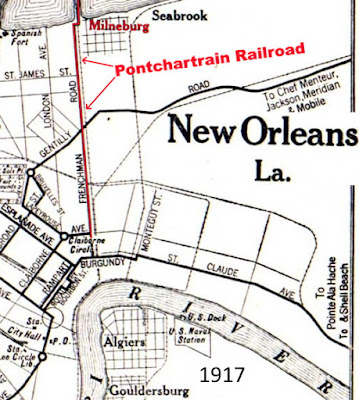 " It was famous as the first railroad completed west of the Alleghenies, having been chartered on January 20, 1830, and opened for traffic on April 14, 1831. After having been operated continu­ously for over 100 years, it was aban­doned in 1935," the L&N History article stated. 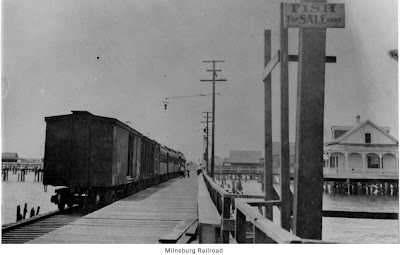 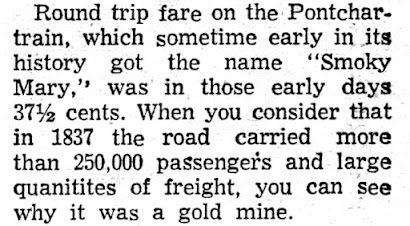 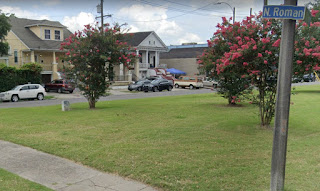 All that is left of the historic Pontchartrain Railroad is the one mile marker in the neutral ground of Elysian Fields Ave. where it crosses N. Roman Street.
(Image source: Google Street View) 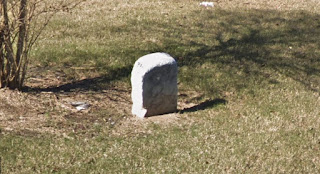