In 1960 newspaper publisher Nick Murray was impressed with the beautiful little marina called Evensen's Yacht Basin in Madisonville. Located across the street from the side of the Madisonville Museum (which was then the Madisonville town hall), the facility offered a number of boat slips some of which were covered.

While asking the owner, Mrs. Evensen, if it was all right for he and his photographer Jack Burke to take pictures of the facility, Murray learned the full story of the place, and the remarkable career of Captain Even Evensen who made it all possible.

Not long ago a photographer friend of mine, Jack Burke, and I were down in Madisonville look­ing behind its facade to find subjects which we might put on film. While probing, we chanced to come across a beautiful scene, consisting of 19 boats lined up in a channel, obscured by beauti­ful trees.

It was a stirring sight and struck a chord deep within us.

We asked the owner, Mrs. Even Evensen, for her per­mission, which she gave, to snap a picture of this idyllic scene. She was quick to point out, how­ever, that this beautiful spot was not created by her, but by her late husband, Captain Even Evensen, who died over a year ago. The land was nothing but a swamp when he conceived the idea of building a channel lead­ing into the Bayou Desire', near his property.

It was then that she began to  tell us about her husband, who was awarded the Merchant Ma­rine Distinguished Service Medal, which she cherishes, as well as two letters from people who were close to the incident which earned for him that high honor. 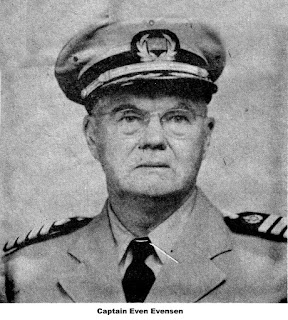 I believe the citation itself clearly gives an idea of Cap­tain Evenson's bravery, and we quote it in full:

For distinguished service in the line of duty.

His ship, the SSBenjamin Contee, while carrying 1,800 pri­soners-of-war, was struck at night by an aerial torpedo from an enemy dive bomber which glided in with stilled engines. The torpedo struck the for­ward holds in which 900 prisoners were confined, blew off the hatches, and killed and injured more than 300.

The ship im­mediately began to settle by the head as the sea rushed in the gaping hole. The surviving pri­soners swarmed out of the holds, overpowered the guards, and commandeered the lifeboats. Exercising forceful command, Cap­tain Evensen herded the panic-stricken prisoners to the after­decks.

Then, releasing the remaining 900 from the after holds, he flooded those holds to bring his ship on an even keel. Sup­ported by the fine discipline of a loyal crew, he was able to bring his ship into safe port and to deliver the prisoners into military hands.

While probing for a nice pic­ture, we did not think we would come across what we consider a gem of a story and which is certainly worth telling. Mrs. Evensen certainly has every rea­son to be proud of her late husband. 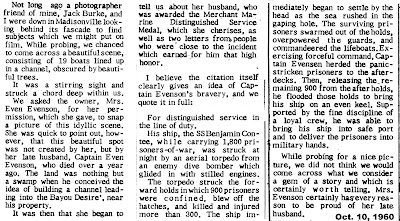 I agree with Nick Murray that the yacht basin was a beautiful place tucked away in a corner of the bayou. For a few months in 1972, I lived near Evensen's Yacht Basin, taking afternoon trips in my pirogue paddling down the bayou and sometimes out on the Tchefuncte River. 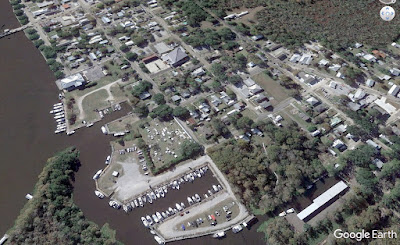