When Covington became known worldwide for its healthfulness and hospitality, sometimes that caused some issues with people coming here to get away from the yellow fever.

In a news item published on October 2, 1897, the St. Tammany Farmer reprinted an editorial from the Times-Picayune regarding the effects of the yellow fever quarantine on the City of New Orleans. It dealt with the attitudes of the people living north of the lake towards those leaving the Crescent City to get away from those infected.

Here is the text of that editorial -

The Picayune's tribute to Covington

"In view of the fact that about every other place in Louisiana has closed its gates against New Orleans, the little city of Covington presents a most praiseworthy and admirable exception.

With open doors and extended hands, it welcomes the people of this quarantine-beleaguered city, and offers them its pure balsamic air and its generous hospitality.

It is a fact recorded by the people of Covington, in every visitation of yellow fever to New Orleans, that they have never closed their doors against our people, and never had cause to regret their broad-minded and most brave humanity.

This is something that should always be remembered to their credit, and it should sink deep in the hearts of those who have experienced the hospitality of Covington in their time of need."

The editor of the Farmer replied: "The above is true, so far as Covington is concerned, but there are a number of refugees from the city here who would, if they could have their way, prevent any more from coming.

They should bear in mind the fact that the gates of Covington are wide open, and the privilege is extended to all others to come and participate in the same blessings which they themselves are enjoying.

The "dog in the manger" policy won't work here, and if they are afraid of their city friends and neighbors, they should have gone to some place where they could have quarantined all others out except themselves." 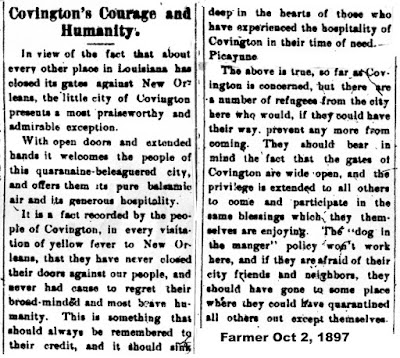 According to dictionary.com, the term "dog in the manger" is applied to someone who insists on possessing something they do not want or need out of spite to prevent someone else from having it.
Posted by Ron Barthet at 6:00 AM