In 1918, when the Jahncke Shipbuilding company was cleaning up an old plantation home to use as its shipyard office in Madisonville, a woman working in part of the structure found an aged piece of paper tucked in the rafters. When historians found out what it was, they were excited. Here's an article and picture from a New Orleans newspaper telling the story.

REPORT OF BATTLE OF NEW ORLEANS DATED 1821 IS DISCOVERED

Document of Gen. D. B. Morgan Found in Old Plantation House At Madisonville

Comes To Light When Jahncke Building Co. Takes Over Property For Offices

Nearly a century it had slept there, tucked safely away up under the hand-hewn oaken rafters of the ancient LeSassier Plantation house on the banks of the Tchefuncte River at Madisonville.

Came then a day when the sleepy old Le Sassier plantation knew the rush and bustle of 1918 war-time industry. And the old plantation home, reborn as the Madisonville office building of the Jahncke Shipbuilding company of New Orleans, was given the sort of a house-cleaning that modern business gives its office head-quarters.

"Wonder what this is," speculated the scrub woman, whose hand touched something that rustled and crinkled beneath her fingers.

Out of its century-old resting place, she drew a folded paper,  yellowed, ancient, crumbling in spots, but with the brownish black of ancient ink still showing plainly. And the paper found its way into the hands of Commodore Ernest Lee Jahncke, head of the shipbuilding corporation.

Clear and distinct at the end of—the old document was the signature:

And so the long-lost report of Brigader General David B. Morgan, officer on the staff of "Old Hickory," Major General Andrew Jackson, and commander of the American forces on the West Bank of the Mississippi River in the. Battle of New Orleans, came to light.

The document is illegible in many spots. But in the main the paper of ancient weave has withstood the years.

"I, David B. Morgan, of the Parish of St. Tammany and the State of Louisiana," runs the report, "do here-by certify that during the invasion of this state by the English troops under the command of Lieutenant-General Sir Edward Pakenham, in December, 1814 and January 1815, I was brigader general of militia in the state of Louisiana and that I commanded the drafted militia there of then in the service of the United States, and acting under the orders of Major General Jackson, that on the 27th of December, 1814, I took command of the right bank of the Mississippi River agreeably to orders previously receiveed; that on the morning of the 8th of January,. 1815, I was attacked by a strong detachment of the English troops said to be under the command of Colonel Thornton... 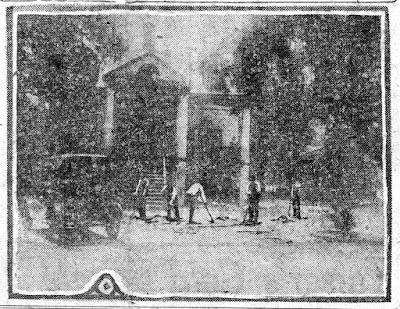 A picture of workers in front of the Jahncke Shipyard Office

The above items came from the collection of Bertha Neff, and unfortunately there was no date on the article, and the bottom half of the article was torn off. Next time I get to the library I will do a search of the Times Picayune back issues online and see if I can find out more information.

Letters to and from General Morgan are found in a number of archival collections, as well as on auction websites.

This letter from General Morgan to Andrew Jackson, dated January 11, 1815, was found on a Library of Congress webpage: 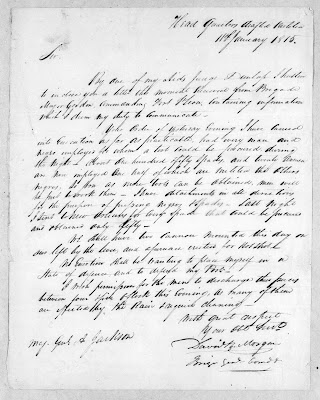 Even letters to General Morgan are quite valuable historically as well as actually, as shown in this auction note from Rumsey Auctions:

By 1820, steamboats were operating on Lake Pontchartrain to both Mobile via passage into the Gulf of Mexico and to Madisonville on the estuary of the Tchefuncte River. Although it was not until June 1834 that a route across Lake Pontchartrain was contracted, letters were being carried privately the 36 miles from the landing on the southern shore of the lake to Madisonville as early as 1821.

The writer, Thomas Shield is reporting to General Morgan of his visit to Pensacola Fla. during the period of the first Seminole Wars. General David Morgan was a soldier who served in the Louisiana Territorial legislature, member of the Constitutional Convention, commanded the militia of Louisiana and Mississippi under Gen. Jackson at New Orleans in 1815 as brigadier-general, etc. 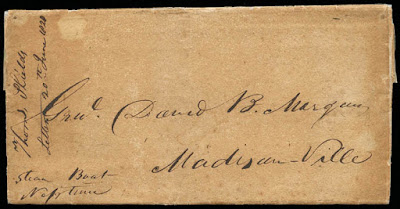