Poole Lumber Company of Covington was established 76 years ago shortly after World War II and supplied much of the lumber for building homes and businesses throughout St. Tammany Parish during the home building boom between 1956 (opening of the causeway) and today. 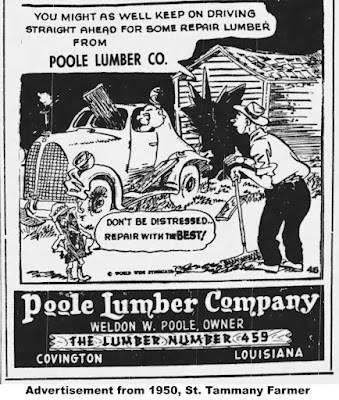 Founded in 1945, Poole Lumber Company became a leading supplier of building materials, cabinets, windows, and a multitude of other home building and maintenance hardware, as well as lighting fixtures, faucets,  locks,  tools, windows, doors, and roofing, siding, and insulating products. For a while it sold ready-mixed concrete from a concrete plant at the parish fairgrounds.

Located at the northern end of Columbia Street in Covington, the company was owned and managed by four generations of the Poole family, and over the decades they built a loyal customer base, composed of individual homeowners, architects and homebuilding professionals.

The Poole Lumber building in 1995 some 26 years ago

Columbia Street has been Covington's main commercial thoroughfare for more than 100 years, so the location was a good one for the lumber company as people coming from northern St. Tammany, Washington Parish, and southwest Mississippi passed right in front of it on a regular basis. 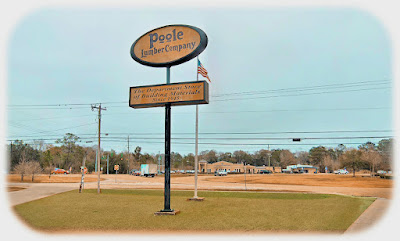 Wallace and John Poole went to work at the lumber company in the late 1950's, joining their father Weldon who had started the enterprise a little over ten years previously. 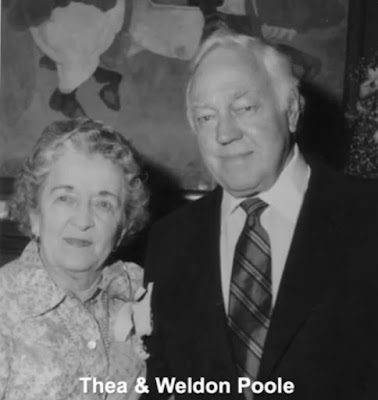 The company also had a large store in Hammond, located at 47204 Morrison Blvd.

Poole Lumber  also had a home design service managed by Bob Sander, a member of the American Institute of Building Design, who had been with the company since 1949. Bob had an office with drafting tables, a blueprint printer, and file cabinets full of dozens of home designs that could be built as drawn or modified to meet special needs and wishes. 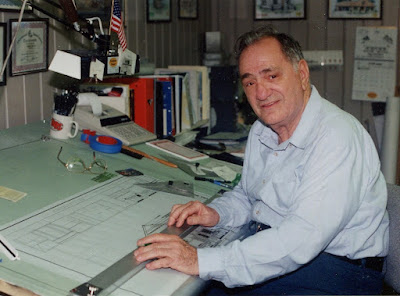 Bob specialized in Acadian architectural styles, and his attractive home plans with long front porches were favored by many young people just starting out or older folk seeking to downsize. Poole Lumber even printed and distributed free calendars every year showcasing Bob's most favored house plans. Sander also designed a number of small commercial buildings and provided early renderings of plans for the Lake Pontchartrain Basin Maritime Museum in Madisonville.

Donated Land for a Museum

The Poole brothers Wallace and John promoted historic preservation throughout the area and donated land to the St. Tammany Historical Society on which to build a museum in Covington. The property was located on the front of the Columbia Street tract occupied by Poole Lumber company. The society was unable to carry forth with the project, however, and the land was  returned to the Pooles several years later. 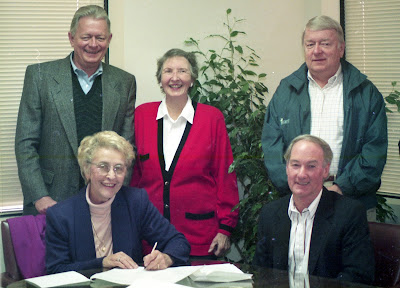 In addition to the historical society, Wallace and his brother John also helped other community organizations such as Habitat For Humanity. They also donated the land upon which three Covington area fire stations were built. 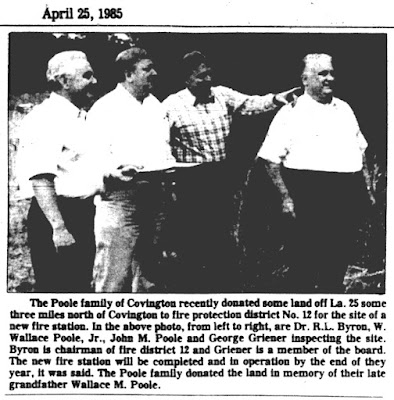 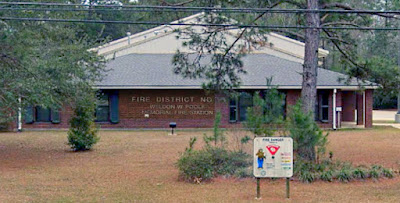 Having come here in the 1870's, by 1894 Claudius Poole owned and operated the Poole Brothers Livery and Stable on the site where the St. Tammany Farmer newspaper now stands in the 300 block of North New Hampshire Street.  In 1909 its name was changed to Wallace Poole Livery and Stable. 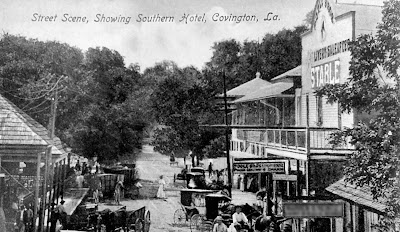 Claudius was the grandfather of Weldon Wallace Poole, who a few decades later would establish Poole Lumber Company a block over and a block southward on Columbia Street.

Here is the text from a 1910's community information booklet about Poole's Livery & Stable:

"This business was established but eleven months ago and it is now one of the most successful enterprises in the town. The stable building is a very handsome structure, 40x120 feet, two-story. Besides handling a large livery and heavy drayage business, the firm is doing the leading furniture moving business, using regular furniture transfer vans.

They have built up an extensive business also in the undertaking line, having a graduate embalmer and carrying, a full line of funeral supplies, owning a handsome hearse as a part of their equipment.

The business is conducted by Mr. C. M. Poole and his son, G. Fontaine Poole. The senior Mr. Poole has been identified with the livery and hotel business for the past fifteen years. He was formerly located at Covington."

End of 1910 description of Poole Livery and Stable article 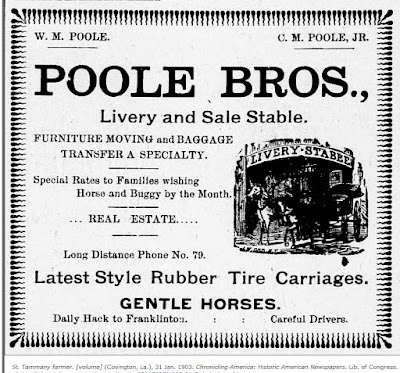 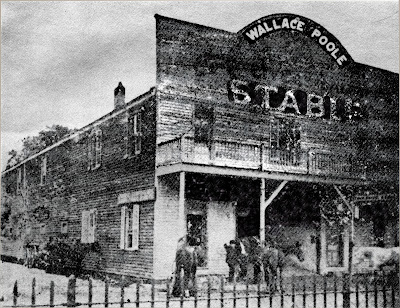 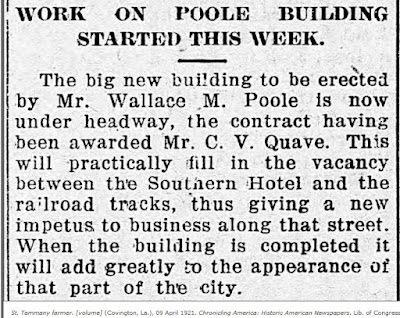 In April of 1921, a new building was being constructed by Poole in the 300 block of North New Hampshire.
Wallace Poole was mayor of Covington back between 1925 and 1929. 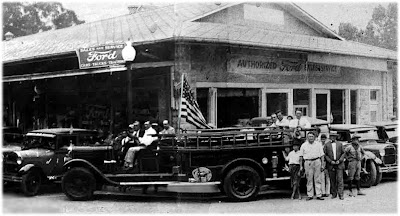 Above, a row of 1928 Model A Fords with Mayor Wallace Poole, in the coat, sitting next to Fire Chief Joe Hoffman in the fire engine. Also in photograph are Nick Seiler, Bill Wanner and Ted Bonney. The photo is a line up of new cars for sale at the Frederick-Planche Ford Dealership on the southeast corner of Boston and New Hampshire Streets. 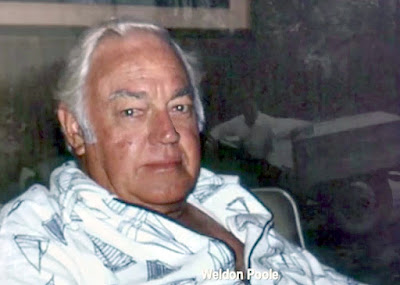 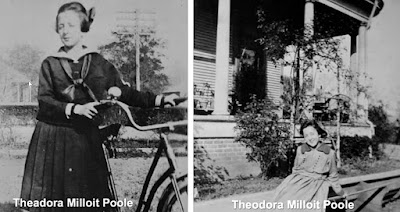 Theadora Poole in her youth 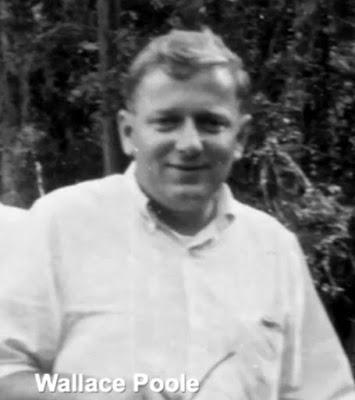 Wallace Poole, Jr., who managed the lumber company for many years, died Sunday, April 25, 2004, at 69 years of age. According to his obituary, Wallace was a lifelong resident of Covington, a graduate of St. Paul's High School (Class of 1952) , and Southeastern Louisiana University (Class of 1956).

In 2015 the company was sold to Doug Ashy Building Materials, a Lafayette area lumber outlet, and the new owner has continued with the Poole family name and continues to provide a wide array of products and services.

I worked at Poole Lumber for two  years (1998 and 1999) helping the lumber office to size beams when it began using a rather complex new computer software program. I also converted some of Bob Sander's house plans to AutoCad digital files, but I had the feeling he enjoyed hand-drawing them on vellum and hanging them in the file cabinet where he could pull one out immediately if someone wanted to take a look at it. 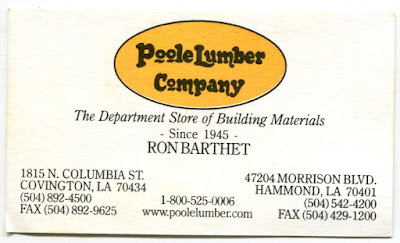 After a while, the beam sizing computer software program became more widely available to architects designing private homes, so they began using the same software to size their own beams. My position was phased out, and I went to work for the St. Tammany Parish School System.

During that time I was also an officer at the historical society and was asked to deal with the museum land donation made several years earlier.  While the historical society appreciated the Poole family's generosity in providing the land, the society was created for the purpose of doing research and writing history books, which were published and then distributed to the general public.

Officers of the society felt that building and maintaining a museum structure, (that came with monthly utility bills, insurance, and environmental controls needed to protect any donated documents and artifacts) was not within the scope of the historical society's mission. Since a museum was not going to be built on the land, the Poole brothers asked for the group to return it to them, and we were glad to do so.

Covington's new post office next door to the Poole Lumber company property sits on six acres that was purchased from the Poole family in the mid-1990's. It might even be the same site that the museum would have been built upon. The post office was moved from downtown Covington after the tornado of 1997 wreaked significant damage to the structure on Florida Street at Gibson Street .

Poole Lumber Company over the years has provided key expertise, quality building materials, and a tremendous selection of everything a person and/or architect could need. It became an integral part of the Covington and St. Tammany community, especially when demand for new homes skyrocketed.

In return,  the Poole Brothers contributed much to the area, helping preserve St. Tammany history, supporting Habitat for Humanity and a number of other non-profit organizations dedicated to serving the needs of the people who lived here. 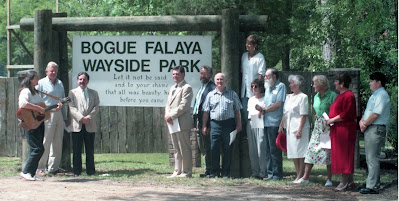