This is the story of Mandeville's seawall on Lake Pontchartrain from the early 1900's onward. Below is a photo of the Mandeville lakefront around 1900, when it was just a string of sandy beaches with cypress stumps and big piles of driftwood everywhere. Click on the images below to see a larger version. 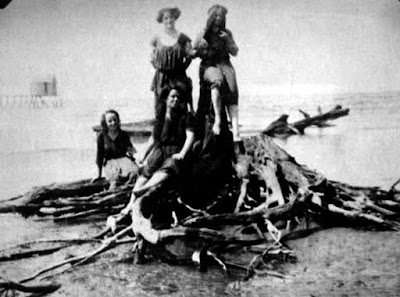 Before the seawall, there were sand beaches and driftwood. 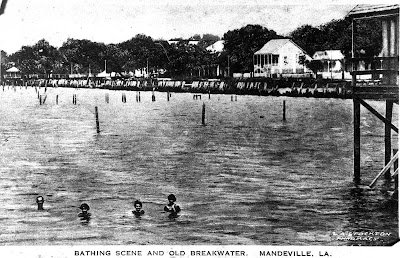 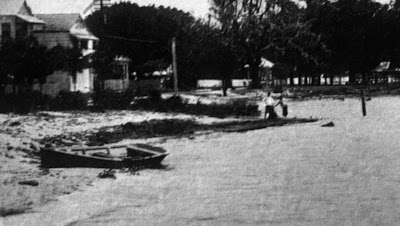 In the 1900’s and 1910’s, they tried to protect the lakefront from erosion with timber pilings. 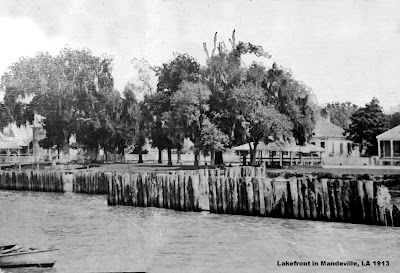 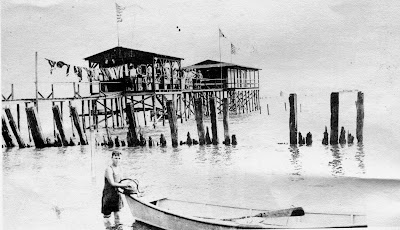 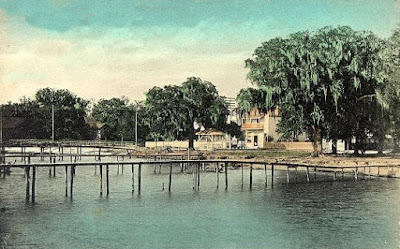 Public interest continued to mount on building a better seawall. A contract was signed as early as 1913.

Problems arose during construction, however. This newspaper headline is from 1916. This became, as it was called back in the early 20th century, a political issue. 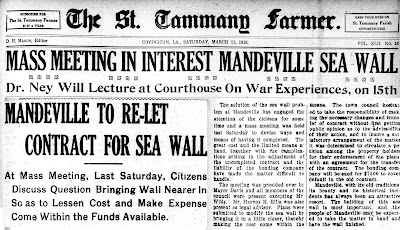 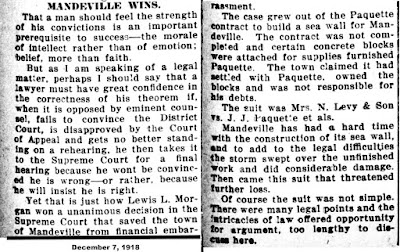 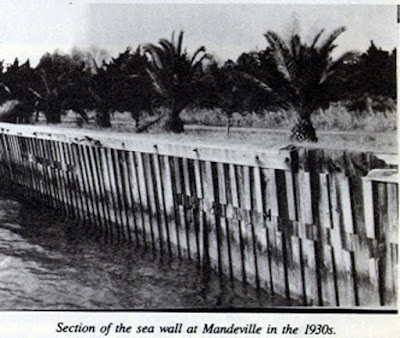 Efforts to build a better barrier continued until 1937 when the WPA, the Works Progress Administration, constructed a concrete seawall  and it helped stop beach erosion for a while.

The WPA assigned 150 men to build a better concrete seawall. 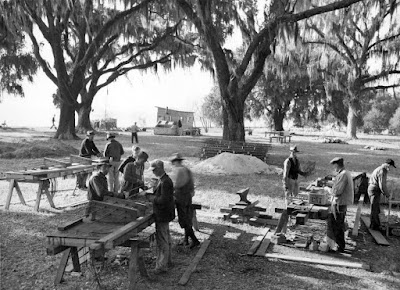 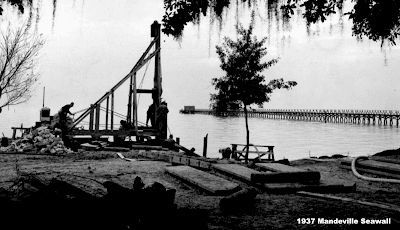 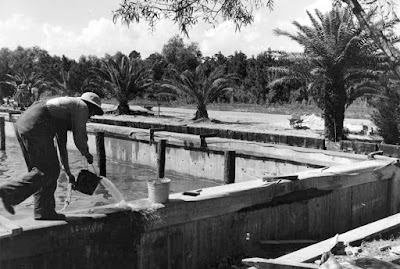 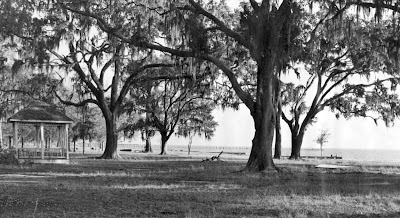 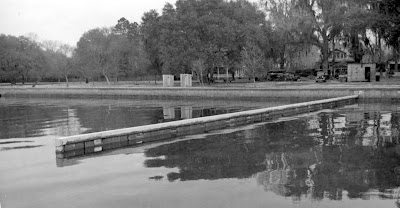 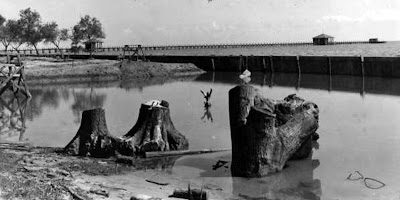 By the early 1970’s some 30 years later, that seawall was starting to crumble. Large sections opened up to sandy beaches again. Here’s a picture I took in 1972. 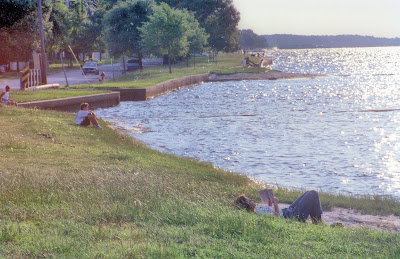 Below are more pictures of the seawall falling into the water. In some places they had tried to repair it with bricks, throwing rip rap into the ever widening holes caused by erosion. It was becoming unstable, dangerous, too dangerous to stand on the edge of the seawall to look at the lake. 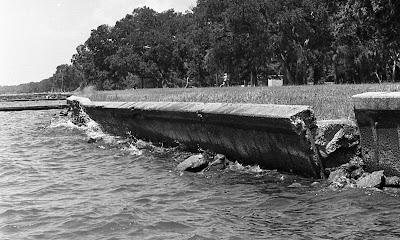 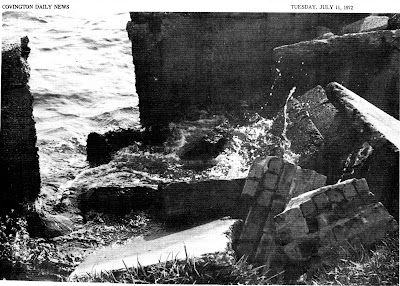 Here’s a picture of someone in 1973 jumping over a large break in the seawall. 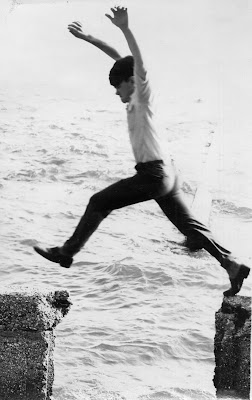 According to an article in the Times Picayune in August of 2017, it’s now time to re-visit rebuilding and repairing the seawall. It’s a never-ending problem because of the never-ending wave action of Lake Pontchartrain reclaiming the lakefront through erosion.

In that article Kim Chatelain said the first seawall was made of wood and was severely damaged by the 1893 hurricane that hit the New Orleans area. “Two years after the hurricane of 1893 destroyed Mandeville's original seawall, which protected only the eastern side of the city, town leaders constructed a new and larger seawall that extended farther to the west,” she wrote. “In 1913, the city decided to build a concrete wall to provide further protection, according to historical accounts.”

She went on to explain that in 1915, before the concrete barrier was completed, another powerful hurricane hit the area, destroying the partially-built wall. The town resumed construction, however, and finished the project.

Ms. Chatelin’s article noted that in the 1930s, the Works Progress Administration public works initiative brought in more than 150 men to build a new seawall that performed admirably for more than five decades.  That seawall lasted until Hurricane Andrew decimated it in August of 1992.

Because of the continuing erosion, wear and tear caused by the wave action of Lake Pontchartrain, millions of dollars are spent keeping the seawall intact. But what would have happened if the seawall had never been built? What if new seawalls had never been put in to stop the onslaught of erosion? 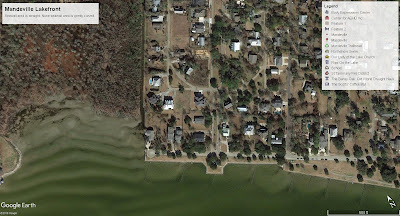 Above is an aerial photograph from Google Earth that shows the west end of Lakeshore Drive. On the right is the part of Mandeville that has been protected by the seawall. On the left is the natural shoreline of Lake Pontchartrain that hasn't been protected by a seawall. 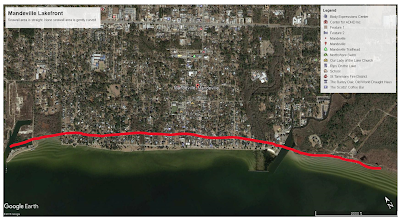