The invention of the submarine was one of the key turning points in naval history as well as world history. It played an integral part in World War II history, on both sides, and during the Cold War, submarines were one of the greatest deterrents to World War III. 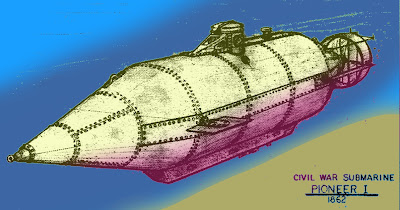 No one knows where the Pioneer wound up but the Hunley was found 22 years ago off the coast of Charleston, SC. 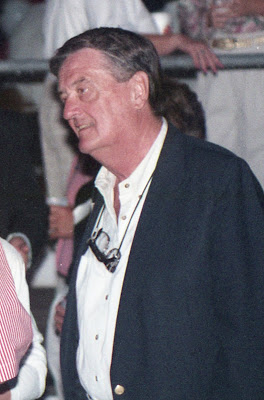 Mandeville resident John T. Hunley (shown above) said he wasn't related to Horace Lawson Hunley, but he studied the invention of the submarine extensively and was considered an excellent source of information on H. L. Hunley and his efforts to build the world's first underwater sea vessel. He was president of the "Raise the Hunley" organization. 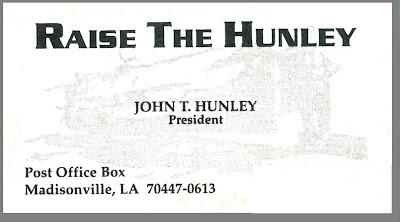 Below is an article he wrote in 1992 about the first prototype, the Pioneer. Click on the image to make it larger. 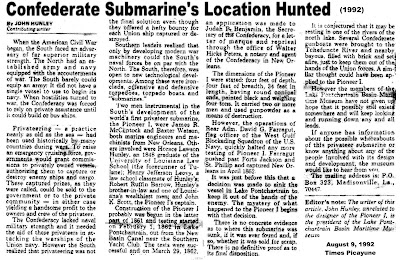 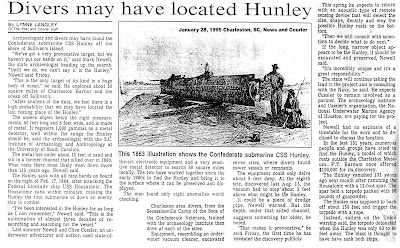 Later, David Carambat, in his popular magazine column "Treasures of the Tchefuncte," also told about the prototype underwater vessel, the Pioneer I, and its connection to St. Tammany Parish.

Here is his article. Click on the image to make it larger. 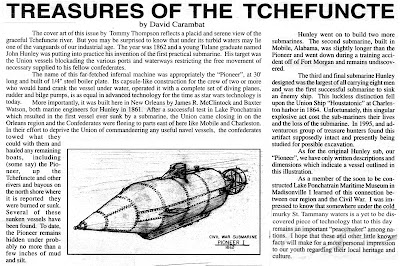 When the third submarine prototype built by Hunley was found offshore at Charleston, S.C., in 1995 John T. Hunley of Madisonville started the "Raise The Hunley" organization that was based in Madisonville, with himself as president.

That year he traveled to New Orleans to meet with a friend of his, the acclaimed adventure novelist and marine researcher Clive Cussler. They discussed the recent discovery of the lost submarine "The Hunley," and how efforts were being planned to raise the historic vessel that rewrote naval history in Charleston, SC.

I was privileged to take pictures of this group and hear their amazing story as they tracked down the final resting place of The Hunley submarine, the world's first successful submarine, according to documents that detail the inside mechanisms and historic accounts that credit the vessel with sinking a ship on its own.

Click on the images of the article below to read more about this real-life adventure. 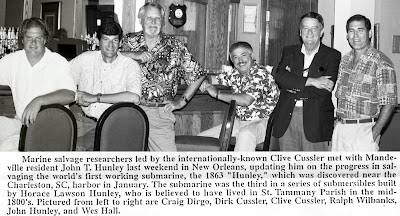 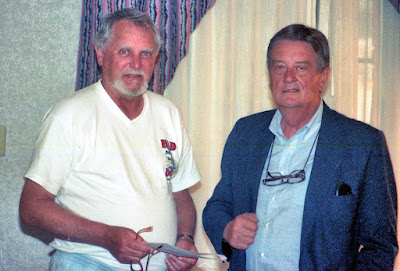 Clive Cussler and John Hunley in 1995 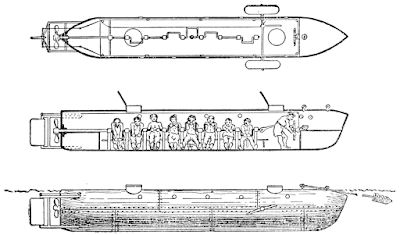 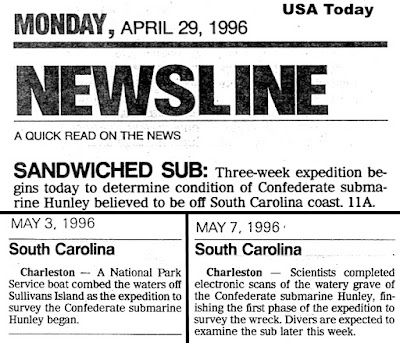 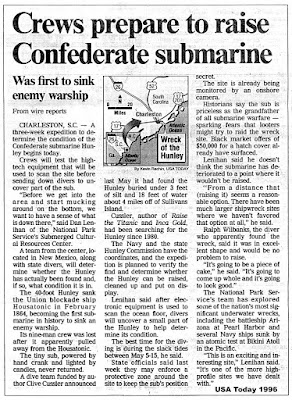 Horace Lawson Hunley owned a plantation in Covington and served as a state legislator and as the deputy customs collector in New Orleans, according to the Friends of the Hunley, a South Carolina commission set up to preserve the submarine. For some time, the last will of Hunley was lost to St. Tammany public records even though it had been seen and photographed in the St. Tammany Parish Archives years earlier.

Here is an article about the search for the will. 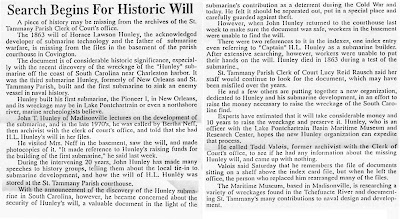 The will was found ten years later in a box that had been taken from the parish archives.

For more information about the Hunley will and what it contained,
CLICK HERE for a photo album of scanned pages from a report describing that will in detail.

A book about the Hunley Submarine,CLICK HERE

For a book written by Cussler about finding the Hunley and other historic shipwrecks, CLICK HERE.

Click on the video above for an inside look at the submarine, courtesy of the "Friends of the Hunley" website.
According to information from the Hunley.org website, the builders of the Hunley submarines were James McClintock and Baxter Watson, partners in a steam gauge manufacturing business in New Orleans. "By late fall of 1861, these two inventors began the construction of a three-man underwater boat."

They joined forces with Horace L. Hunley, a native of  Tennessee. Hunley was a lawyer, merchant, and a successful Southern planter, but his main interest was in designing and building a submarine.

"Hunley recognized the importance of breaking the Union blockade and keeping supply lines open to the South. The small band of Confederates began work on a new approach to naval warfare, one that took the fight below the water’s surface. This quest became a process of innovation and evolution," the Hunley.org website goes on to relate.

"Working with Hunley and Watson, McClintock developed two prototype submarines, the Pioneer and the American Diver. Improving the concept each time, they finally had success with the creation of the Hunley, a weapon that would forever change naval warfare.

"The Pioneer was built in New Orleans in early 1862 and performed moderately well. The small submarine would sometimes become caught at the bottom of Lake Pontchartrain with the crew cranking the propeller, unaware they were stuck. After only a short month of tests, the Pioneer was destroyed by the Confederates to avoid capture by the Union army that was quickly closing in on the city.

"Union occupation forces were entering New Orleans when the three inventors, carrying blueprints, diagrams and drawings, fled to Mobile, Alabama, with the intent of designing an even more formidable submersible attack boat.

"Soon after arriving in Mobile, McClintock, Watson, and Hunley teamed up with Confederate patriots Thomas Park and Thomas Lyons, owners of the Park & Lyons machine shop. Within months after Hunley, McClintock, and Watson arrived to the besieged and blockaded Alabama coast, a second submarine was already under construction at the Park and Lyons shop near the harbor. McClintock, in a post-war letter wrote, “We built a second boat at Mobile, and to obtain room for machinery and persons, she was made 36 feet long, three feet wide and four feet high. Twelve feet of each end was built tapering or molded, to make it easy to pass through the water.”

"During this time frame, the group began to receive local military support. Lieutenant William Alexander, CSA, of the Twenty-First Alabama Volunteer Regiment, was assigned to duty at Park & Lyons.

"The group of engineers made several attempts at propelling the new sub with an electric-magnetic engine or a small steam engine. Unfortunately, they were unable to produce enough power to safely and efficiently propel the submarine. This “trial and error” process took place over a period of several months until they decided to stick with a more conventional means of propulsion. They installed a hand crank and, by mid-January 1863, the American Diver was ready for harbor trials.
"The American Diver, according to McClintock, was “unable to get a speed sufficient to make the boat of service against the vessels blockading the port.” Despite the American Diver’s apparent limitations, evidence exists that indicates she left from Fort Morgan sometime in mid-February and attempted an attack on the blockade. The attack was unsuccessful.

"Soon after, another attack was planned, but as she was being towed off Fort Morgan at the mouth of Mobile Bay in February of 1863, a stormy sea engulfed the American Diver. Fortunately, no lives were lost.

"The American Diver was never recovered, and her rusting hull may still remain beneath the shifting sands off the Alabama coastline. Her exact location was long ago lost by history."

The Pioneer and the American Diver
(Images from the Hunley,org website)

The third submarine, the Hunley, once recovered off the coast of Charleston,  has become the focal point of a large interactive museum in Charleston, with extensive displays, historical artifacts, and the Hunley itself, resting in a tank of water and carefully being examined and restored. The museum is located at the Warren Lasch Conservation Center, 1250 Supply Street (on the old Charleston Navy Base in North Charleston, South Carolina. 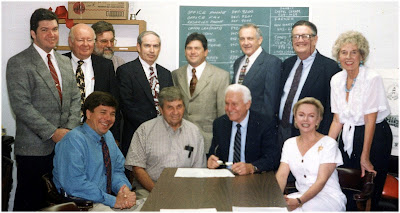 John Hunley, standing second from right, with board of Lake Pontchartrain Basin Maritime Museum
Photo by Ron Barthet
Clive Cussler died at 88 years of age in February of 2020, after having been confirmed as the true finder of the sunken Conferate submarine off the coast of Charleston, S.C.  The Association Press described him as "the million-selling adventure writer and real-life thrill seeker who found the Confederate-era submarine H.L. Hunley.
Beginning in 1965 Cussler started his writing career, publishing his first "Dirk Pitt" adventure novel in 1973, according to his website's biography. His efforts in trying to find sunken vessels around the world resulted in the discovery of more than 60 shipwrecks. He was founder and chairman of the National Underwater and Marine Agency.
See also:
https://hunley.org/overview/