The Covington High School building on Jefferson Ave. was destroyed by fire on Sunday, November 10, 1974. 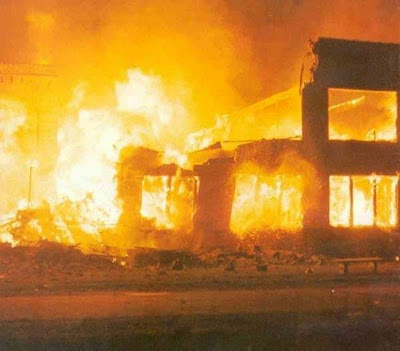 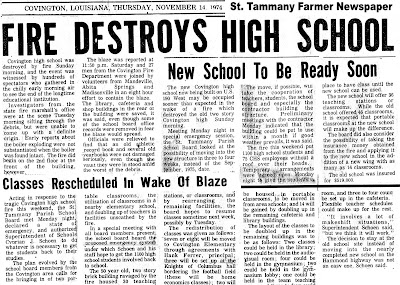 Newspaper Articles From the Week Following

Covington high school was destroyed by fire Sunday morning, (November 10, 1974) and the event was witnessed by hundreds of spectators who gathered in the chilly early morning air to see the end of the longtime educational institution.

Investigators from the state fire marshal's office were at the scene Tuesday morning sifting through the debris, but were unable to come up with a definite origin.  Early reports about the boiler exploding were not substantiated when the boiler was found intact. The fire did begin on the 2nd floor at the front of the building, however.

The blaze was reported at 11:50 p.m. Saturday, November 9, and 27 men from the Covington Fire Department were joined by volunteers from Mandeville, Abita Springs and Madisonville in an eight hour effort to contain the blaze. The library, cafeteria and shop buildings in the rear of the building were saved, it was said, even though some of the school board office records were removed in fear the blaze would spread.

Officials were relieved to find that an old athletic record book and several old yearbooks were not damaged seriously, even though the vault they were in stood amid the worst of the debris.

Classes Rescheduled In Wake of Blaze

Acting in response to the tragic Covington high school fire this weekend, fhe St. Tammany Parish School Board met Monday night, declared a state of emergency, and authorized Superintendent of Schools Cyprian J. Schoen to do whatever is necessary to get the students back to their studies.

The plan evolved by the school board members from the Covington area calls for the bringing in of two portable classrooms, the utilization of classrooms in a nearby elementary school, and doubling up of teachers in facilities unscathed by the fire.

In a special meeting with all board members present, the school board heard the proposed emergency system under which Schoen and his staff hope to get the 1100 high school students involved back to school.

The 50 year old, two story brick building ravaged by the fire  housed  30 teaching stations, or classrooms, and by rearranging the remaining facilities, the board hopes to resume classes sometime next week, possibly by Tuesday.

The redistribution of classes was given as follows: seven or eight will be moved to Covington Elementary through agreements with Hank Ferrer, principal; three will be set up at the Knights of Columbus hall bordering the football field (these will be home economics classes): two will be housed, - in portable classrooms, to be moved in from area schools; and 14 will be gained by doubling up in the remaining cafeteria and library buildings.

"It involves a lot of makeshift situations," Superintendent Schoen said, "but we think it will work."

The decision to stay at the old school site instead of moving into the nearly completed new school on the Hammond highway was not an easy one. Schoen said.

New School To Be Ready Soon

The new Covington high school now being built on U.S. 190 West may be occupied sooner than expected in the wake of a fire which destroyed the old two story Covington high Sunday morning.

Meeting Monday night in special emergency session, the St. Tammany Parish School Board looked at the possibility of moving into the new structure in three to four weeks, instead of the September, 1975, date.

The move, if possible, win take the cooperation of teachers, students, the school board and especially the contractor building the structure. Preliminary meetings with the contractor Monday indicated that the building could be put to use within  a  month  if good weather prevails, it was said. 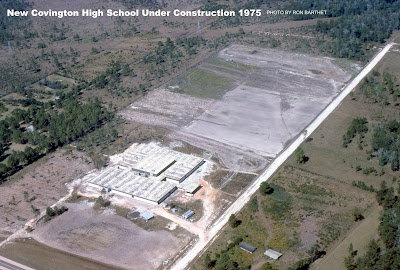 The fire put 1100 high school students and 75 CHS employees without a roof over their heads. Temporary arrangements were agreed upon Monday night to give the students a place to have class until the new school can be used.

The board did also consider the possibility of taking the insurance money obtained from the fire and applying it to the new school in the addition of a new wing with as many as 14 classrooms. The old school was insured for $519,000. 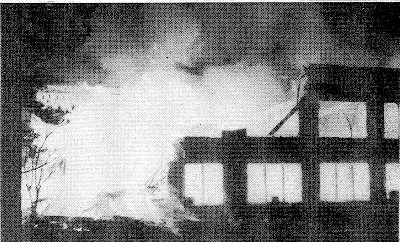 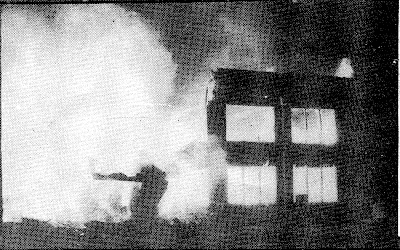 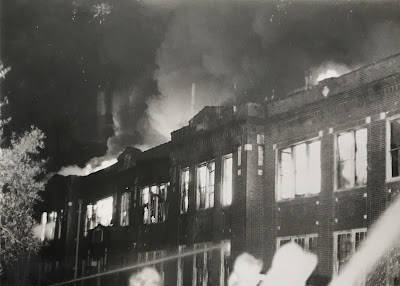 Here is an excerpt about the fire from the "History of Covington High" written in 2004 by Marilynn Hawkins and Charlene Sanders.

"Both Mr. Wagner, principal, and Mrs. Patricia Massoth, then librarian, tell how they were awakened by phone calls telling of the fire. Mrs. Massoth called her father who had been a student here to accompany her. She grabbed her keys since she felt she might have to throw library books out the window.

When they arrived the fire was out of control. Mr. Wagner tried to get into the offices, but the fire was too close. He did get in the back where the business department was, but even there the smoke was so heavy he had to leave. Along with two or three hundred others they stayed the night dazed and hardly believing what they saw. The crowd was so quiet it might have been a funeral they were attending. Fire hoses entwined a two or three block area as the firemen worked valiantly. So much water was used it was feared that the low pressure would force them to desist. They did use all the water in the water tower, and almost all of the reservoir.

The outbuildings, library, and cafeteria were saved, but the main school with its oiled and waxed and re-oiled and re-waxed floors was a complete loss. Many could not restrain their tears as they watched the demise of Covington High.

Mrs. Massoth says that a lot was learned in the new makeshift arrangement of classrooms--a lot about cooperation, sharing and taking care of one another. While it was hectic, school spirit was high and everyone pitched in to make it all work.

The assistant principals had bicycles so they could check on classes in the various outlying areas. There were no class bells so watches had to be consulted for dismissal and class times. In the library Mrs. Massoth managed to order books, have a teacher's lounge (coffee area), helped student with research papers and all the while four classes were being taught.

Three English and one Speech classes were divided only by thin partitions. Sometimes a student in one class would ask a question only to have it answered by the teacher in one of the nearby classes who thought it was one of her students who had asked the question. 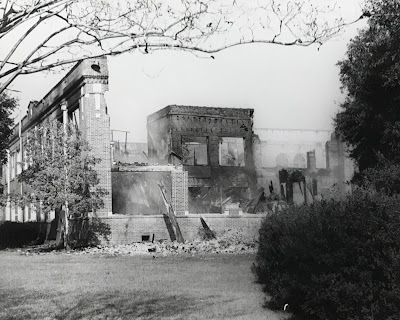 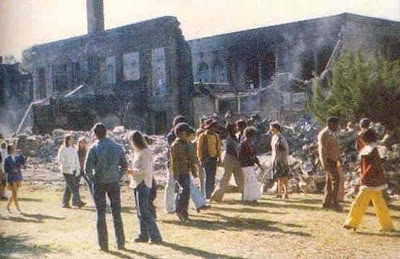 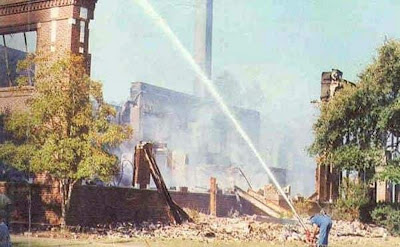 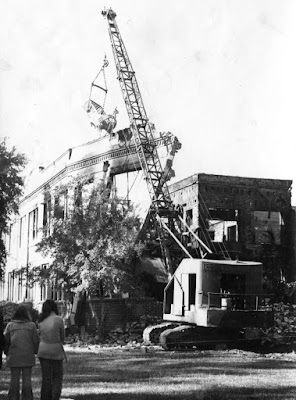 Knocking down a wall after the fire on Jefferson Avenue 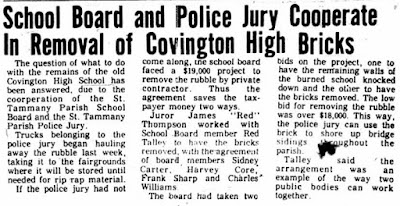 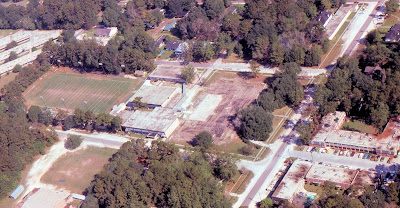 Aerial view of Covington High location in 1975, after the removal of debris from the fire. 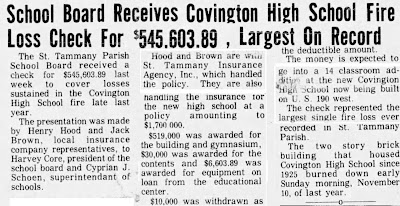 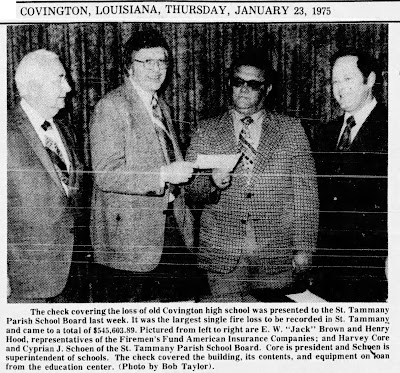