The Ancient Rite of Candlelight

In October of 1976, Polly Morris wrote an article about the "Ancient Rite of Candlelight" that took place annually in the old cemeteries of her hometown of Lacombe. Here is the text of that article, as it appeared in the St. Tammany News-Banner on October 27,1976. 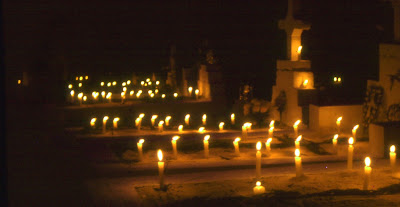 The Ancient Rite of Candlelight in Lacombe Cemeteries
By Polly Morris

The night of November the first, it will happen all over again... just as it has happened for so many years that no living person can say when it truly started.

The people who care about an old custom will leave their homes when the last rays of the sun kiss the tops of the tallest pines. At twilight time they will be in the cemeteries, and when the Evening Star begins to twinkle in the dusky sky, they will move like shadows among the shadows, lighting hundreds of candles. One by one the flames dispel the deepening darkness, and soon the area is ablaze with light.

Each cross, each coping, each crypt is dazzling white, creating an unforgettable scene of haunting, heartbreaking beauty.

The people who have kept alive the lovely candlelight custom do not know why or when it originated. It has always been so,they say, so they continue an observance that was old when their grandfathers were yet unborn.

And they are quite right in their uncertainty, for no one can accurately pinpoint when it began. No doubt the All Saints celebration was brought to Louisiana by the European settlers in the 1700's, and was believed to be a Catholic custom dating back to the 9th Century. However the Celts were having a celebration to their Sun God on or about that date several centuries previous. They in turn could have inherited it from the primitive people who feared evil spirits and burned fires to protect them and their dead from unknown forces.

It is quite probable that the Church followed the usual practice of having Christian celebrations fall on a pagan celebration deliberately. In time the old customs were overshadowed by the new ones which closely followed the pagan rites, but with Christian overtones. Recent Legends The very ancient stories of evil spirits and the dead coming back for a visit home on one night a year is superstition, but the true stories of recent times are equally interesting, and rapidly becoming legends of their own. 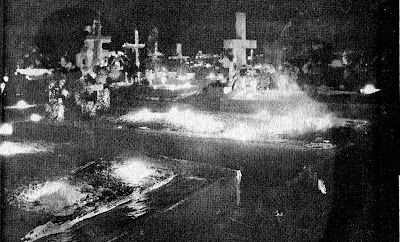 At the Williams Cemetery there is a grave of Papa George, but as no one knows where it is now, his spot changes occasionally. No one knew Papa George's last name, says Henry Cousin, but he came in on a schooner to Lacombe, and fell into Bayou Lacombe and drowned. He was buried in the Williams Cemetery, and the children started clearing off a place for his grave somewhere and lighting him a candle. In keeping with the cusom that every grave, even those who are usually neglected, must have at least one candle... just because.

The Osey Ordogne Cemetery has its little story too. Raymond Cousin, part owner and manager, says his great-great grandfather owned the property and lived a short distance from the cemetery in a house that is no longer standing. There was no cemetery there until Osey Ordogne found a dead man in the nearby Bayou Lacombe.

The man was a stranger to Ordogne, but he buried him on the property and thus started the little graveyard. Now Osey Ordogne lies in the cemetery he once started with a dead stranger, and his grave is cared for by his great-great grandson, Raymond Cousin.

Cousin says that the stranger's grave is unknown now, and that, like almost every old cemetery, there may be two or more occupants in one sight. But no one knows, for in five or six generations, some old graves would be forgotten.

The custom of putting candles on the graves was once a popular celebration. The cities frowned on it, and finally declared it illegal because it created a fire hazard in the dry month of November. Which is quite understandable for New Orleans, which suffered greatly from fires. All Saints Day was kept in the country communities for some time, and there are a few places that observe it now. But the custom seems to be dying out more and more, except in Lacombe.

It seems to be getting better, in fact, for there is a gentle rivalry between cemeteries and people. Henry Cousin says, "It's like everyone wanting to have their house and their yard looking better than a neighbors. Well, we take a pride in having our graves and tombs look good on All Saints Day, because if they don't, there is always someone who notices."

The candlelight custom is not only a beautiful tradition. There is something special about it that is completely unlike the usual morbidity associated with death. There seems to exist a sort of communication between the living and the dead. The whole family goes to the graveyard to whitewash the tombs and crosses, and children play among the gravesites quite complacently.

There are large graves and little ones, and a sister indicated a small site and said, "That is my little brother." And the word "is" was quite noticeable.
Yesterday, today, and tomorrow seem to blend in the little cemeteries. None of them are too far from a stream, for in the days before roads, a funeral procession was a parade of pirogues on the bayous. It is also easy to imagine the people coming in pirogues with wax myrtle candles and coxcomb and torches to light the way.

Time seems to stand still on All Saints Day, when the people come again with candles and light a glow that reaches even to the tops of ancient trees. Motorists slow down, and some go into the cemeteries, for a candlelit graveyard is an impressive sight. Few leave without a lump in their throat and perhaps a little prayer. Like ... "As it has happened tonight, and in ancient times, please God . . . keep it happening forever and ever. . . " 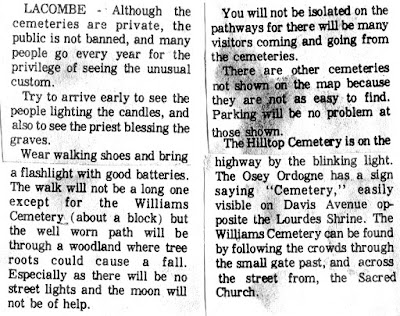 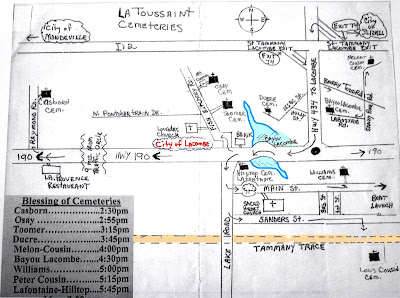