Predictions About Folsom for the Year 2076

Some forty-three years ago, in 1976, the American Bicentennial Year, there was a lot of speculation about what life in the United States would be like 100 years from then, in the year 2076. I sat down with all the mayors in the area and posed them the question: "What will your community be like 100 years from now?"

The mayors responded from Covington, Mandeville, Abita Springs, Madisonville and Folsom. Here is the article from Folsom. 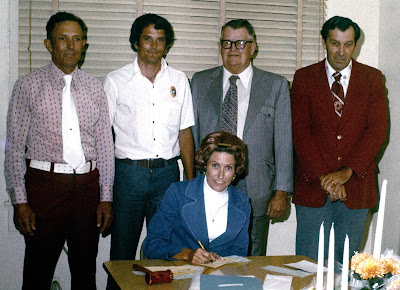 
Mayor Vera Faye Forbes of Folsom recently looked at the future of her town in St. Tammany Parish and predicted what was in store for it in the next 100 years.

By the year 2076, the American Tricentennial, Mayor Forbes felt that Folsom would still be in the center of a rural farming area, with advances in agriculture providing better hybrid seeds, healthier crops and no weeds or pests.

"Farming equipment will probably be automated enough so that the farmer won't have to go out in his fields and harvest his crops," she said.

The population of Folsom itself will not be over 20 per cent more than it is now, she said, and transportation will probably be powered by solar energy.

"I don't think the cor­porate limits of Folsom will be much larger than they are now,"  Mayor Forbes commented, "but the entire town will probably be a business district rather than residential."

By 2076, the main highway La. 25 will be a four lane thoroughfare, she feels, and there will be a lot of apart­ment complexes in Folsom. However, she does not think there will be any buildings over two stories high.

The people living in Folsom 100 years from now will be mostly retired, she said, and there will not be as many commuters residing there as one may think. She also did not foresee any kind of industry coming to the Folsom area over the next 100 years. 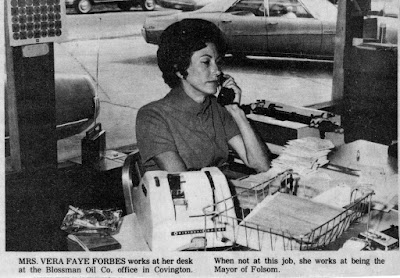 Predictions About Abita Springs for the Year 2076

Predictions About Covington For 2076

Madisonville of the Future, 2076

Mandeville In The Year 2076