According to area residents, the old bank building in Madisonville, located at the corner of  La. 21 (Covington St.) and St. John St., has over the years housed a bar, a real estate office, flea market, a residence, a hospital, a library and even a police station. 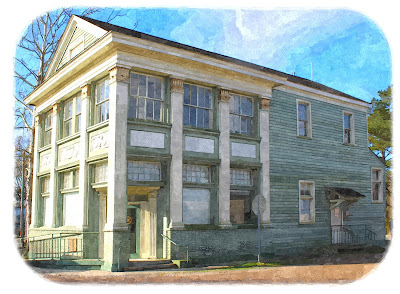 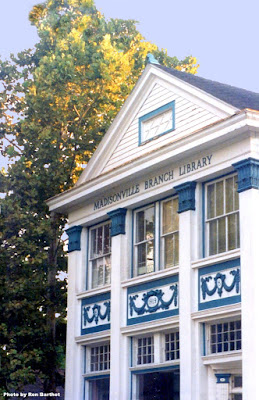 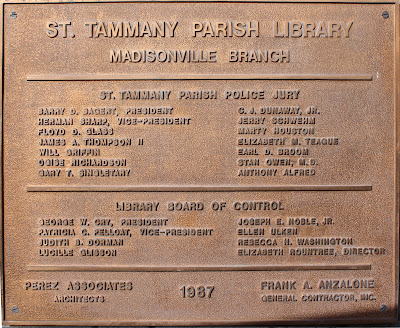 The building has been listed since 1983 on the National Registry of Historic Places. Its address is 400 Cedar Street. 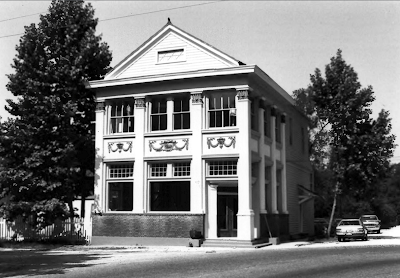 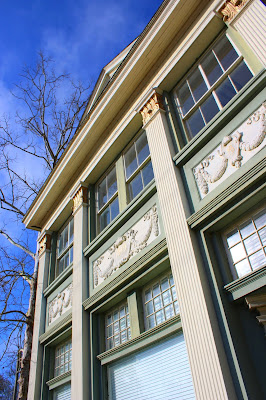 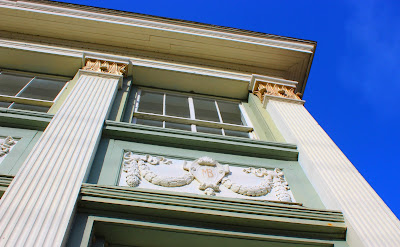 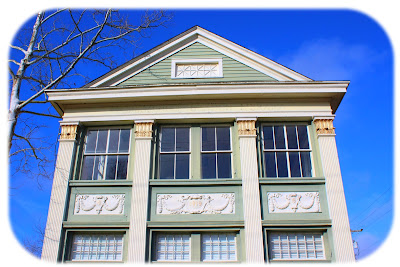 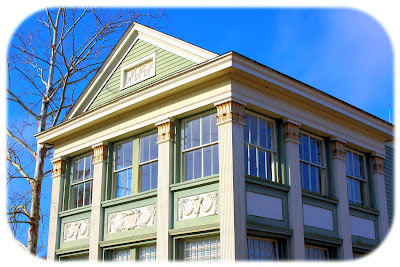 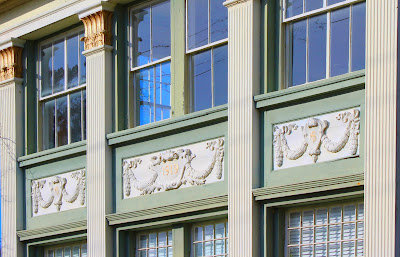 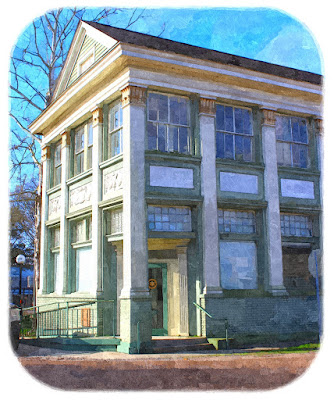 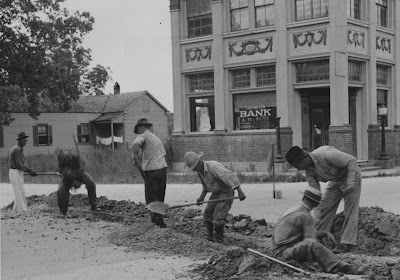 In 1937 workers with the WPA (Works Progress Adminstration) dug a new waterline across a Madisonville street, right in front of the Madisonville branch of the Covington Bank. Above is a photo taken during that project. Click on the image to make it larger.

In the application written in 1982 for placing the structure on the National Register of Historic Places, the following description was offered:

"The Madisonville Bank, located on the corner of Cedar and East St. John Streets in the small town of Madisonville, is a two-story frame commercial building with an exceptionally detailed classical facade dating from 1919. It now houses an art studio, a small apartment and offices and has received some modern alterations, but it retains the features that make it the commercial landmark of Madisonville and one of the town's two most architecturally significant structures from the 1890-1920 era.

"Originally constructed c.1900, the building received a new facade in a major renovation undertaken in 1919. When first built, it was a two-story three-bay gable-front clapboard building with a very simple shopfront and corner entrance. The 1919 renovation so altered the facade that the only decorative feature remaining from the c.1900 building was the gable end with its boxed cornice and frieze. The c.1919 wraparound shopfront extends two stories and is topped by an overhanging cornice and entablature.

"The shopfront also features square pilasters with Corinthian capitals delineating three bays of the facade and three bays on the north side of the bank lobby. On the panel separating the first and second stories are three molded garlands with cartouches. One of the cartouches bears the date 1919; the other two have the initials "MB." The windows on the first floor are plate glass with multi-paned transoms; those on the second floor are paired with two over two double hung sashes. The corner entrance has double glass panelled doors with egg and dart molding.

"Original interior features include:
(1) an elaborate pressed tin ceiling, cove moldings and cornice;
(2) a bank vault;
(3) window surrounds with cornerblocks in the lobby;
(4) molded baseboards and doors with plain surrounds and transoms in the second floor rooms; and
(5) beaded board siding in the rear stair hall.

"Alterations since the 1919 renovation include the following:
(1) the apparent sandblasting of the doors on the facade;
(2) the removal of the teller's counter;
(3) plywood panelling on the walls and linoleum on the floor of the lobby;
(4) construction of a kitchen, bedroom and bath in what were first floor offices; and
(5) linoleum flooring on the second floor. 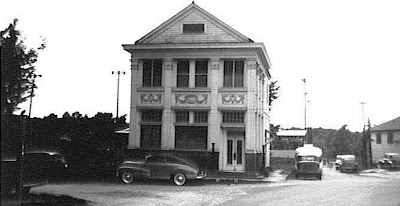 "Instead, there is a scattering of a dozen or less nondescript pre-1933 commercial structures located along Louisiana Highway 21 and the west bank of the Tchefuncte. The pretentiousness and ambition of the shopfront that was added to the c.1900 bank in 1919 and the building's ornate pressed tin ceiling are clearly unequalled in the town.

"The building is also significant as one of two architectural landmarks dating from Madisonvilie's late nineteenth-early twentieth century economic boom. Although the town was incorporated in 1817, the majority of the town's building stock appears to date from the C.1890-C.1920 period of prosperity or later.

"During the early and mid nineteenth century, the town's small economy was based on trade, small industry (brickmaking, lumbering and shipbuilding) and Madisonvilie's place as one of Lake Pontchartrain's North -Shore resorts. In the late 1800's, the lumbering and shipbuilding industries grew substantially. Two sawmills, one in Madisonvilie and the other in nearby Houltonville, operated until 1920 and 1916, respectively. Initially there were several small shipyards, but during World War I, the Jahncke Shipyard expanded tremendously until it employed over 2000 workers at the height of its wartime activity."

Photos taken in May, 1983, from the application for Historic Places designation: 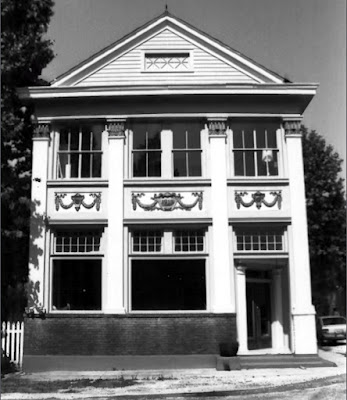 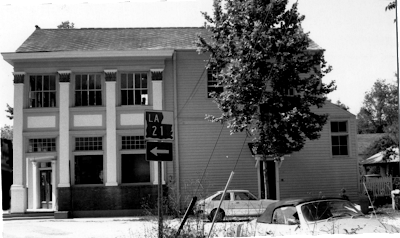 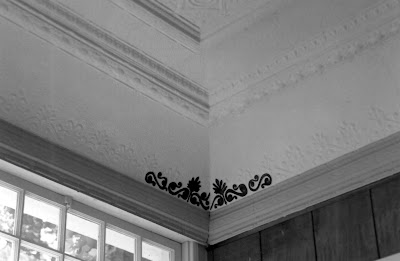 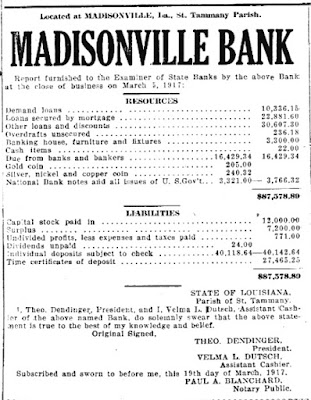 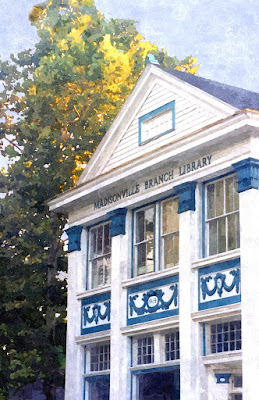 Madisonville Bank Photos
Posted by Ron Barthet at 5:00 AM