Down in the far southeast corner of St. Tammany Parish, following U.S. 190 and La. Hwy. 433,  is a roadway known as the Old Spanish Trail.

This Old Spanish Trail, which is just over 100 years old, was an automobile highway construction project promoted by a number of business people beginning in 1915 with meetings in Mobile, AL.  There are other older Spanish trails located between Santa Fe, New Mexico and Los Angeles, CA, (based in historical references) and other areas out West, but those are not the ones we are talking about. 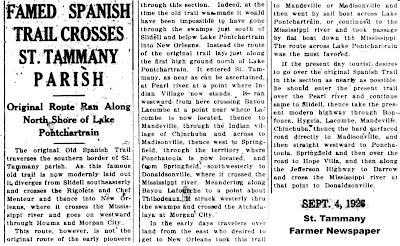 The original Old Spanish Trail traverses the southern border of St. Tammany Parish. As this famous old trail is now modernly laid out, it diverges from Slidell southeasterly and crosses the Rigolets and Chef Menteur and thence into New Orleans, where it crosses the Mississippi River and goes on westward through Houma and Morgan City.

This route, however, is not the original route of the early pioneers through this section. Indeed, at the time the old trail was made it would have been impossible to have gone through the swamps just south of Slidell and below Lake Pontchartrain into New Orleans.

Instead, the route of the original trail lay just along the first high ground north of Lake Pontchartrain. It entered St. Tammany, as near as can be ascertained, at Pearl River at a point where Indian Village now stands.

Meandering along Bayou Lafourche to a point about Thibodeaux, it struck westerly thru the swamps and crossed the Atchafalaya at Morgan City.

If the present day tourist desires to go over the original Spanish Trail in this section as nearly as possible, he should enter the present trail over the Pearl River and continue same to Slidell, thence take the present modern highway through Bonfouca, Hygeia, Lacombe, Mandeville, Chinchuba, thence the hard surfaced road directly to Madisonville, and then straight to Pontchatoula, Springfield, and then over the road to Hope Villa, and then along the Jefferson Highway to Darrow and cross the Mississippi River at that point to Donaldsonville.
End of 1926 article

The idea of the highway construction project known as the Old Spanish Trail (the one in St. Tammany) started in 1915 at the beginning of the automobile era. Much of the following information comes from websites that celebrate the Old Spanish Trail's cross-country achievements.

Around the early 1900's roads going east and west were scarce in the southern states. The need for a well-constructed and well-maintained highway promising the "shortest route" between the Atlantic and Pacific oceans was a long sought-after dream (and possibly a nightmare to build). The decision was made to build one and name it the Old Spanish Trail because of the romantic visions of Spanish explorers, nearby Spanish Missions, and areas of Spanish culture that were located along its path.

Starting in St. Augustine, FL, and ending in San Diego, CA, the construction of the highway faced considerable obstacles, not the least of which were the many swamps, rivers and bayous it had to cross, not to mention the high desert and rough terrain of Texas, New Mexico and Arizona. There were six main locations of cultural interest to be linked by the highway: St. Augustine, New Orleans, San Antonio, El Paso, Tucson and San Diego.

To help push the project through, the Old Spanish Trail Association (OSTA) was formed, and it tried to enlist the enthusiasm and political clout of any and all towns, business owners, counties and states that would commercially benefit from the building of the highway. S.W. Provensel of Slidell was among those who attended an early conference planning the project. The work before them was formidable, but after 14 years, the "Old Spanish Trail" was completed and officially dedicated with ceremonies in St. Augustine, FL.

CLICK HERE for a 1926 Status Report "Yearbook" ( PDF File) on the progress being made on the Old Spanish Trail highway project.

When finally ready for travel in 1929, the OSTA noted that the highway was "the most expensive and most highly engineered of all the transcontinental trails."

The initial interest in the route came from the Mobile, AL, area and stemmed from the fact that the city located near the Gulf of Mexico offered a good sized port thanks to the Mobile, Tensaw, Alabama and Tombigbee Rivers that flowed into Mobile Bay. Still, east to west land travelers were faced with a fairly expensive ferry boat ride from Fairhope, AL, to Mobile when they arrived at the Bay. The ferry fees put a damper on people coming that way, and often they would avoid the fees by going around Mobile to the north, missing the city altogether.

So the idea for the Old Spanish Trail was born to build the necessary bridge, pass through the City of Mobile and promote tourism along the Gulf Coast and westward across Texas to California. A number of meetings, conventions and rallies were held to boost enthusiasm for the project, both along the coast and further northward. Chambers of commerce got involved, as did politicians and newspapers. The association did what it could to keep interest and enthusiasm high in moving the project forward.

Speeches were given on the need for highway improvements, and historians told of the benefits of the historical characteristics of the route. While it took some time to hammer out the exact path of the highway, its theme continued to be tracing the “footsteps of the Padres and Conquistadores."

Efforts were made to publish travelogs and brochures highlighting the key Spanish connections of the highway and the towns it visited.

The Old Spanish Trail Association nurtured as many political contacts as possible, both locally and in Washington, D.C., to promote the construction of the highway, at one point not only as a boon to tourism and development, but also as a southernmost military transport road. Building it required bridges over some of the most difficult rivers and marshlands, and it was hoped the federal government would get involved in addition to the state highway departments. 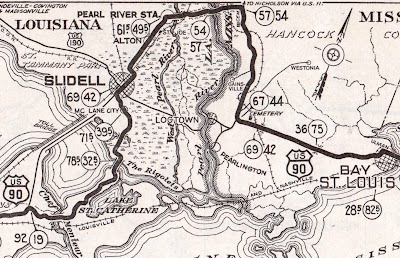 
One of the most vexing problems facing traffic on the highway was the limited capacity of the ferries that were needed at the rivers where the Old Spanish Trail had not yet built a bridge. "The east ferry to New Orleans carried only 30 cars a day into the city in 1926," the Old Spanish Trail website states, noting that the ferries slowed down vehicular traffic considerably.

Although most people agreed that the ferries should be replaced with a bridge, when the highway came to the Rigolets south of Slidell, the situation in 1926 was further complicated by political interests favoring a private toll bridge across Lake Pontchartrain instead of a free public bridge. Proponents of the Old Spanish Trail felt a free bridge at the Rigolets was a critical component of the project.

The group predicted a major loss of tourism revenues for  the City of New Orleans if motorists had to pay a toll to cross the Rigolets bridge rather than drive over a free public one. The high tolls and ferry fees faced by motorist traveling east and west were causing motorists to avoid the southern route across Louisiana (and New Orleans as a result), said Harral B. Ayres, Managing Director of the Association.

He was joined in the effort by Huey Long, then chairman of the La. Public Services Commission, who fought for the free bridge over the Rigolets, and who later (as governor) built the free Huey P. Long Bridge over the Mississippi River in New Orleans, meeting another major challenge to the success of the Old Spanish Trail.  The Rigolets and Chef Menteur bridges were finally built in 1929, coinciding with spans over the Pascagoula, Mobile, Escambia, Biloxi, and Bay St. Louis bays. Ayres hailed the completion of the Old Spanish Trail as  “one of the epics of American construction enterprises."

Although the original Old Spanish Trail Association disbanded after the highway's completion, there have been other smaller groups formed over the years aiming to promote the highway. Thousands of maps and brochures and even some films have been made to increase awareness of traveling the Old Spanish Trail and seeing its many roadside attractions.

While for many years, the Old Spanish Trail was well-traveled and appreciated by tourists, commercial transporters, and local motorists, the highway (U.S. Hwy. 90) lost much of its traffic when Interstate 10 and Interstate 8 were completed in the latter part of the 1960's.

"Although much of current US 90 feels like an interstate, many sections of the old highway are intact, meandering lazily through scenic Cajun Country," the informative Old Spanish Trail website states. "Louisiana is the only state that still markets its Old Spanish Trail highway from time to time."

To read more about the Old Spanish Trail highway construction project, its history and highlights, CLICK HERE  and CLICK HERE. 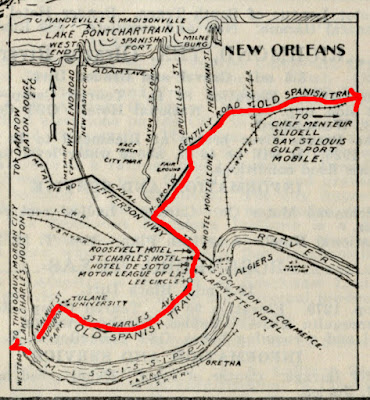