The Pravata Airpark was located west of Slidell, in the area where Carolyn Park subdivision is now, just off West Hall, according to the book by Bonnie Vanney called "Images of America Slidell."  The airpark was built in 1944, the same year the Slidell Civil Air Patrol unit was formed.

In the book "Slidell Camellia City" Dan Ellis said that Pete Pravata, a well-known civic and political figure, owned the land and cleared it himself for use as an airport. It was closed in late 1959. 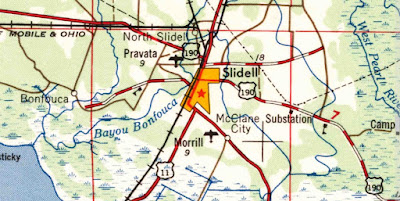 The above image is from the 1957 USGS "Mobile" topographic map, which clearly shows Pravata Airpark (airplane symbol) at the end of West Hall. Another airport is shown, Morrill Airport, south of Old Spanish Trail near McClane City. More information at the Slidell Vintage Photos Facebook group.

Pete Pravata was among the first to be named to the Slidell Airport Wall of Fame for his contributions to aviation growth in the community. He also had a Slidell fire station named after him, and he donated land to the Slidell Little Theater and to STARC for its first building on West Hall.

Also shown on the above topographic map is Morrill Airport, located where what is now Reine Ave. It was 10 acres south of Old Spanish Trail near McClane City, and owned by Jeremiah T. Morrill. Other family members included Ann Azella Jones Morrill and Birdsall Morrill