Here is a 1975 aerial photograph I took of the Broken "R" Ranch on Hwy. 40 just east of Folsom. It was established in 1957 by Andrew "Red" Erwin, who was instrumental in organizing the Louisiana Thoroughbred Association and active in the Santa Gertrudis cattle breeding association as well. He served two terms as Clerk of Court for St. Tammany Parish and four terms of office as Sheriff.

St. Tammany Parish became well known as a thoroughbred race horse training area for many years, and pictures of the parish from the air reveal many oblong training tracks scattered throughout the Folsom area. 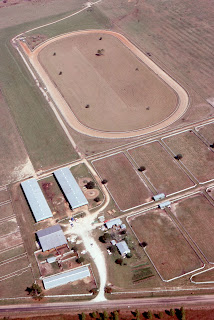 According to the late Mary Busby Frindik, her grandfather Andrew Lee "Red" Erwin was a remarkable man, a true visionary, and accomplished during his life. He was St. Tammany Parish Sheriff, a horseman and a businessman.
The Facebook page she created in his memory contains much information about his accomplishments. "He was born on April 2, 1909, in Covington, Louisiana, to the parents of Benjamin "B. E." and Tena Whitney Erwin. He had to go to work at a young age to help support his family. He left his beloved home to arrive in the big city of Chicago to work in constructing some of the city's tallest buildings.
"He returned home and entered the trapping industry. Although a tough job, this is where he was happiest - in the outdoors. He married Willie Myrtle Williams of Hammond, Louisiana, on May 27, 1934. He always joked that he had to go to Tangipahoa Parish to find a bride because he was kin to everyone in St. Tammany. They settled in Covington to start a family. They had three children - Anna Lee, Marion and James.

"In 1937 he started in the bar business so that he could be at home with his family instead of in the swamps. His bar was named the Pleasure Bar on North New Hampshire Street. He acquired many friends during this time who soon were encouraging him to enter politics. In 1939 he decided to run for Clerk of Court against a well known incumbent.
"Everyone, including the media, were negative toward his candidacy because he was unknown. It was stated in a local newspaper that he would never beat the current clerk. That did not deter him at all. To everyone's shock, he won the election. He served as Clerk for two terms, then decided, after much encouragement, to run for the Sheriff's office.

"He served in that capacity from 1948 to 1964. Also, during his time in office, he was instrumental in getting the Causeway built from the conception of the first bridge to the construction of the second span. He pushed to establish Troop L State Police office and Fontainbleau State Park just to mention a few other accomplishments.

"In 1956 he started Erwin's Insurance Agency which was located on Boston Street across from the courthouse. But his main passion was his horse ranch, Broken R Ranch, started in 1957 located in Folsom which is now Leah Farms. It was here that he became known as the father of the Louisiana Thoroughbred Association.

"He, along with his good friend, Senator B. B. "Sixty" Rayburn, were responsible for passing legislation that protected the breeders and many aspects of horses bred in Louisiana. He also bred Santa Gertrudis cattle and was actively involved with their association."