One of the most interesting professional scientists ever to live in the Covington area was Dr. Daniel Q. Posin. His professional science career spanned many decades and touched upon many aspects of science and physics, but he was best known for his efforts to explain space exploration and atomic energy to the public. 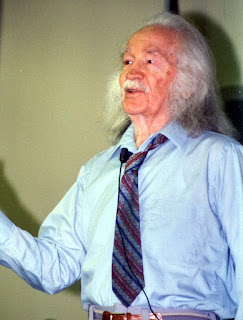 Here is an article from the October 3, 1996, issue of the St. Tammany Farmer.

In September, 1996, his presentation on the fascinating fields of science and physics entertained and informed his Covington audience, but he had done that sort of thing before, nearly 3000 times before, winning awards, earning nominations for the Nobel Peace Prize, and hosting numerous children's television shows on science and its future promise.

Born in Russia, he fled the Revolution there on a cattle boat, coming to America where he eventually became a nuclear physicist, one of the best known scientists in the country. He met, and gained the respect of, Dr. Albert Einstein who personally encouraged him to continue his mission in bringing knowledge about the peaceful uses of atomic energy to the public's attention. That mission included dozens of children's television shows where he explained the mysteries of science and particularly, space exploration. 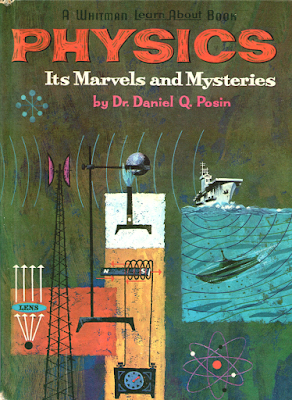 Shown above is one of the more than 30 books he wrote for the popular market about science. They had titles such as Dr. Posin's Giants: Men of Science,Out of This World, Mendeleyev: The Story of a Great Scientist, Exploring and Understanding Our Solar System, What is a star, What is Chemistry, What is Electronic Communication, Science in the Age of Space, Chemistry for the Space Age, and Find Out! First Step to the Future.

The race to space began in the middle of the 1950's, and his expertise was sought out when he signed on as scientific consultant and adviser for the CBS radio and television networks. He produced three television shows and one radio program weekly. Among his programs were "Out of This World," "Dr. Posin's Universe" and "On the Shoulders of Giants." His face was well known as his programs were advertised and promoted far and wide.

Posin presented science in an enjoyable and entertaining way,. His friends and acquaintances knew that on any given day, Posin "could be found dancing energetically around whichever studio he was working in." His presentation skills were aimed at school children, but the adults could also feel the excitement when he explained space travel with the roar of the rockets and the wonders of the solar system.

"He was this darling little guy with a mustache like Groucho Marx, dancing around and showing the planets," said his daughter, Kathryn Posin.

An account of his life stated that he was born in 1909 in Russian Turkestan in a village by the Caspian Sea. He was six years old when his family saw the Russian Revolution coming and began its three-year flight to the United States. He and his mother made their way to Mongolia and finally got passage on a ship to San Francisco. He traveled in steerage next to the cows.

Despite arriving with not a word of English, he soared through school, sold newspapers and worked in restaurants and camps, won scholarships and graduated Phi Beta Kappa from the University of California at Berkeley with a Ph.D. in physics. His father had died young of tuberculosis while working as a janitor in Russia.

In 1943, at the age of 34, Posin became president of the National Academy of Sciences and moved to Massachusetts Institute of Technology to conduct research on radar and radioactivity. It was there that he met and became friends with Albert Einstein. Both men were deeply shaken when the atomic bomb was used in World War II. Einstein, who recognized Posin’s gift for explaining physics to ordinary people, urged him to use his talents to teach the world.
Dr. Posin Explained Science
As his education progressed and his fame grew, Posin gave more than 3,000 lectures in the United States and England on nuclear power and its dangers and benefits. His arguments against using it for war won him six nominations for the Nobel Peace Prize. His book "I Have Been to the Village," about world-altering decisions starting at the village level, had a forward by Einstein, who wrote: "Dr. Dan Q. Posin's book bears eloquent witness to the sincere and self-sacrificing way in which the ablest among the scientists try to fulfill their duty toward the community."

In 1967 he started teaching physics at San Francisco State. He taught until he was 87, after which he moved to the New Orleans area to be near his son, Daniel Jr. In 2003 he died at the age of 93 in New Orleans, LA. 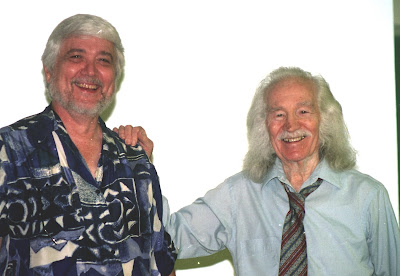 Dr. Posin, at right, was introduced to the Covington audience by Dr. Richard Harrison with the Delta Regional Primate Center.
Here is a link to an excerpt from the pilot episode of "On The Shoulders of Giants," a science program hosted by Dr. Posin beginning in 1961. It was a production of WTTW Channel 11 and the Educational Television and Radio Center. The video recording was placed on YouTube by The Museum of Classic Chicago Television
CLICK HERE to view the program.
The museum's description of the pilot episode gives further details of Dr. Posin's many contributions.
"Here's a kinescope of a pilot for a very early program from WTTW Channel 11, On the Shoulders of Giants. This was later (perhaps as soon as the next episode) re-titled "Dr. Posin's Giants", which ran locally in Chicago at 8 p.m. on Tuesday evenings and was also seen on 54 stations nationally through the NET network.
"The lecturer was Dr. Dan Q. Posin (1909-2003), Professor of Physics at DePaul University, whom no less than Albert Einstein said had "extraordinary pedagogic talents." It was produced for the Educational Television and Radio Center (of which National Educational Television [NET], predecessor to PBS, was the TV arm) by DePaul University and WTTW.
The program opens with the quote "If...I seem to have contributed anything, It...is only because I, like others, have stood on the shoulders of giants who have come before. Isaac Newton."
"Dr. Posin's topic starts off with alchemists, describing those who tried to make gold out of mercury or other elements, showing a picture of one who is about to drop a scorpion into his brew, making reference to the Philosopher's Stone (which would be the focal point of the first Harry Potter book and movie), then shows a picture of a more reputable alchemist in a laboratory, the type of which he had visited at Cambridge and Oxford Universities in England.
"The next painting he shows is one that underscores the contempt for alchemists (depicting a dalliance with the underworld), followed by a painting of an old man looking wistfully at the progress of his contraption in the pot, all with pertinent descriptions.
"He then forwards to New Zealand in 1871 and the Rutherford family, the fourth child of whom, Ernest (born that year), grows up to become the "father of nuclear physics" and a Nobel prize winner - and the good doctor takes us to his life story, while bringing up Wilhelm Roentgen's development of X-rays, Henri Becquerel's discovery of the properties of uranium, the work of Rutherford's own teacher, J.J. Thomson, on atomic theory, Marie Curie's discovery of radium, - all of which had an effect on Rutherford and his subsequent work. 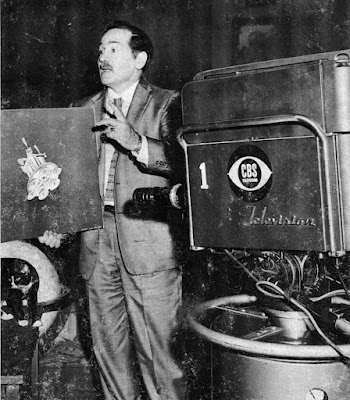 "Dr. Posin then draws a diagram of how Rutherford's findings worked, and shows pertinent pictures of alpha, beta and gamma particles, and charts underscoring how the physicist became known as the "Newton of the atom," and how his work progressed as his life did - all while standing "on the shoulders of giants," and how those who followed in his footsteps would end up standing on Rutherford's."
See also: