The Covington area has been home to a number of talented professional photographers over the years.

Anyone who dabbled in photography in St. Tammany Parish over the past 50 or so years knows the name of Jack Swanson. He taught photography classes at the St. Tammany Art Association in Covington and took thousands of pictures of local events and people. 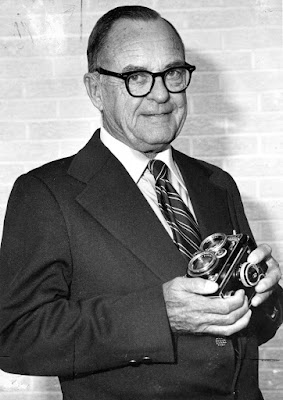 He inspired The Jack Swanson Annual Photographic Exhibit at the art association. 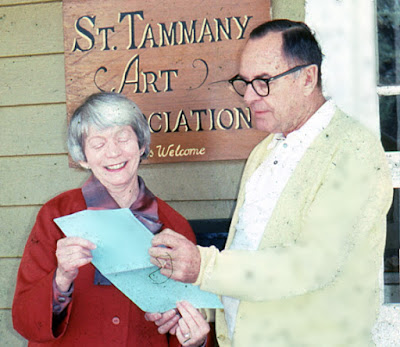 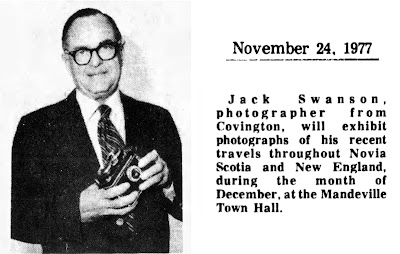 Early Photographers
Surely one of the earliest photographers in Covington was J. H. Goldsby, who ran this advertisement in an 1880 edition of the St. Tammany Farmer newspaper: 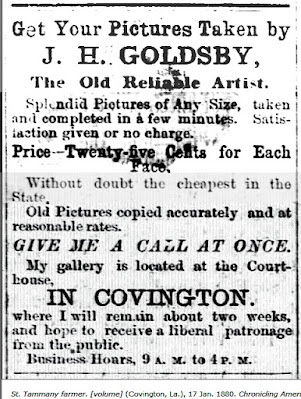 The ad below appeared in the 1929 Lyon High Graduation program 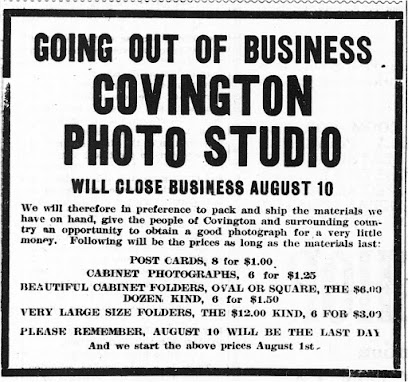 A photographic studio in Covington offered its services but went out of business, way back in  August of 1920.

A couple of the earliest photographers in Covington were Fred Reichard and Fred Darragh. 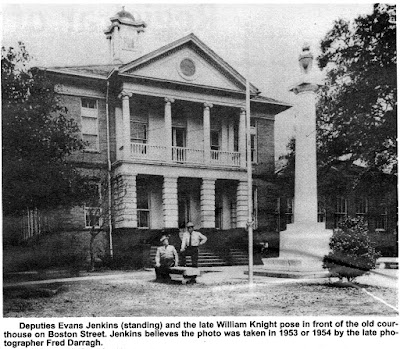 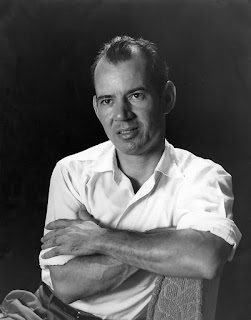 Self Portrait of Fred Reichard taken in his studio circa 1960. According to his daughter Tanya Reichard Voorhees, Reichard also did freelance work from his backyard telescope for Astronomy magazine in the 1970's after he retired from his studio. He took pictures of solar and lunar eclipses. 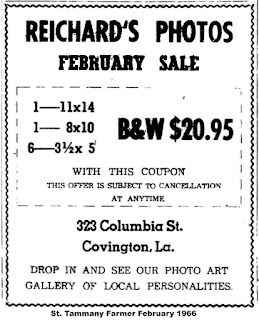 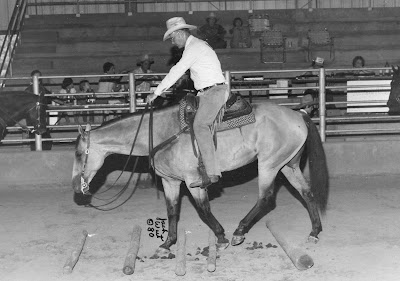 
Jack West and Marie Cobb have taken horse show photographs as well as other pictures. Armin Diblin was quite active in the chamber of commerce, and Earl Wilson Jr. did some photography out of Photo-Sonics. Some of them had studios, and others preferred outdoor settings and lighting. Karen Hays took a variety of photographs across the community and was particularly interested in children's pageants. 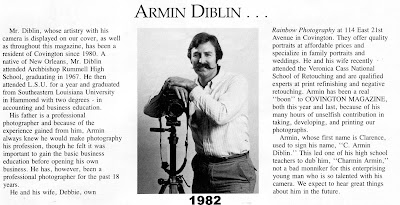 I worked with Emile Navarre on the Mandeville Banner newspaper before he opened his own photography studio in Mandeville in 1976. He was pleased when a picture he took of an accident on the causeway was printed on the front page of the New York Times. 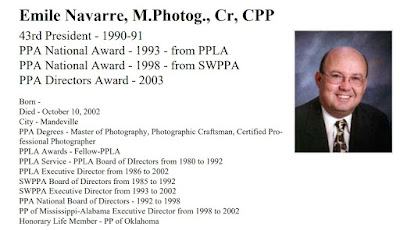 In 1991 Navarre was president of the Mandeville Chamber of Commerce, the  grand marshal of the Krewe of Orpheus, and President of the Professional Photographers of Louisiana association.

In 1993 he won a national award from the Professional Photographers of Louisiana (PPA). He also earned the designation of "Master Photographer" and "Photographic Craftsman" from the organization. In 2003 he won the PPA Directors Award. 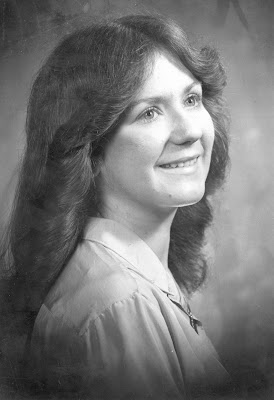 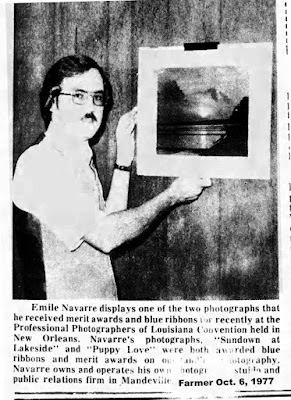 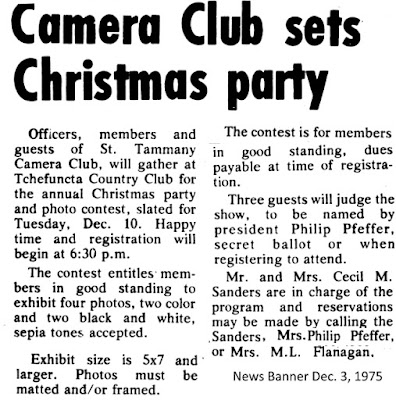 Philip Pfeffer was an avid photographer, active with the Camera Club, and had his own darkroom. He would often exhibit his photographs at the St. Tammany Art Association. He was also a magician and an excellent woodworker, having built most of the furniture in his house and his desk at his law office. 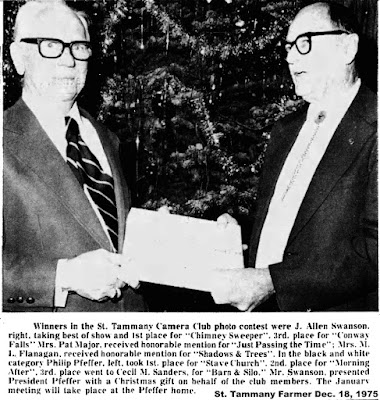 Hazel Ogden
Hazel Ogden turned out a large number of black and white studio portraits, each with her own style of lighting and lens focus. Her studio was on N. New Hampshire,  a few doors north of Rutland Street. According to her granddaughter Susan James, she oil painted many of her portrait photographs to look like paintings. Susan was her summer "assistant" for a while. Ogden took portraits of many of the Covington area's most prominent families and personalities and was the photographer for Covington Country Club for years. 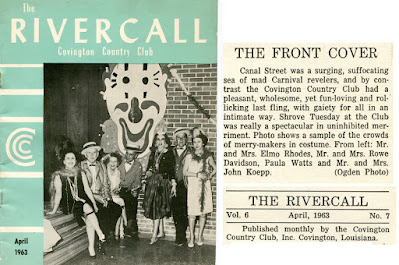 Her portrait work included Louis Prima and Keeley Shay Smith and other local celebrities, and Ogden also did some news photography work, sending her pictures over the telephone using early fax machines. She also taught classes in photography. "She was definitely a woman way ahead of her time and a marvelous entrepreneur," said Ms. James. 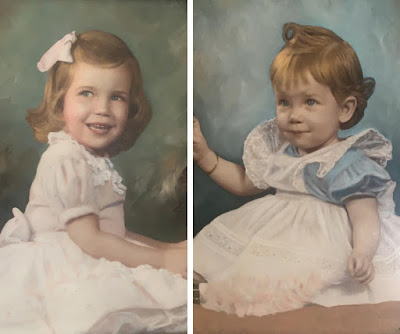 Elizabeth Malone worked for Hazel Ogden and hand colored many of the portraits that came from that studio.
Art Lemane
Click here for a feature article about photographer Art Lemane. 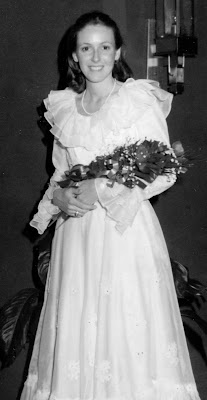 Harriet Blum
Harriet Blum went on to become a well-known landscape photographer specializing in hand-tinted black and white images. Her work is in demand for its uniqueness and nostalgic leanings.
News Photographers

Bob Taylor did crime scene photography for the Covington police department and the St. Tammany Farmer newspaper. David Grunfeld, Chuck Cook and Lionel Cottier Jr. were photojournalists for the Picayune. Over in the society section, Elizabeth Moore has taken thousands of pictures of smiling people enjoying themselves at local events. 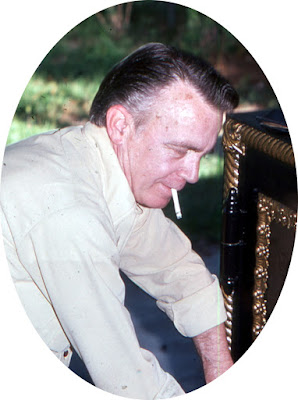 Ron Barthet worked as an editor and photographer for several newspapers for more than 30 years, taking pictures of community events in addition to scenic area photographs in his spare time. He has presented slideshows of his work involving aerial photography as well as historical photographs of the area to numerous civic organizations. From 2000 to 2014, he provided pictures for the St. Tammany Parish School Board website. He is related to the Barthet Brothers photographers who took many pictures in the Labadieville, LA, area in the late 19th century. 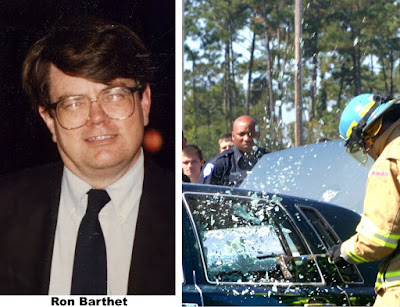 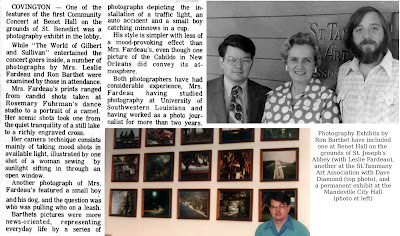 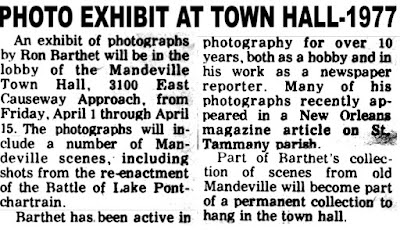 Slide Presentations throughout the parish

Nick Cognevich took a number of photos at athletic events, and Paul Salvant was always out and about taking sports pictures. I apologize ahead of time if I left out anyone taking a serious number of professional pictures in the 1970's and 1980's. 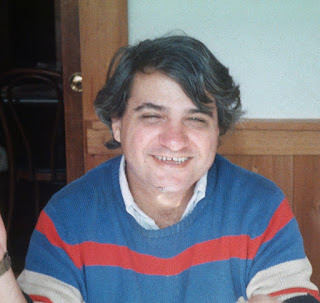 Let's not forget that most resilient and durable photographer of all, the professional who takes all those school classroom pictures and student portraits for yearbooks. The rich treasure trove of classroom pictures of students down through the years are incredibly important to the residents of this area, and their relatives and genealogy researchers.
Today St. Tammany has some of the most talented and innovative wedding photographers. Among them are Ashely Anna Photography. CLICK HERE to go to her Facebook page.
Sometimes I will drive through downtown Covington, and there will be one or more professional photographers and their photo subjects walking around the downtown buildings, using them as backgrounds for portraits. When it comes to portrait backgrounds, it's hard to beat downtown Covington's buildings, wall surfaces, and posing spots.

How I Learned Photography the Old Fashioned Way