In the world of competitive clay target shooting, the name Todd Bender is legend. Not only a world champion in the sport,  the former Covington resident has also become a top skeet shooting instructor.

In 1985, when he lived in St. Tammany, he was also known for his skills as a wildlife artist. The article below appeared in the St. Tammany Farmer at that time. Click on the image below for a larger view. 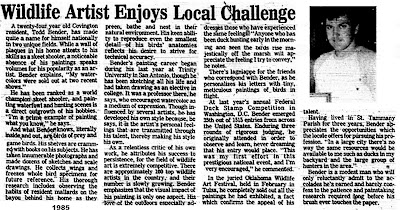 "A 24-year-old Covington resident, Todd Bender, has made quite a name for himself nationally in two unique fields. While a wall of plaques in his home attests to his skills as a skeet shooter, a noticeable absence of his paintings speaks volumes for his popularity as an artist. Bender explains," My watercolors were sold out at two recent shows."

He has been ranked as a world champion skeet shooter, and painting waterfowl and hunting scenes is a direct outgrowth of his hobbies. "I'm a prime example of painting what you know," he says. And what Bender knows, literally inside and out, are birds of prey and game birds. His shelves are crammed with books on his subjects.

He has taken innumerable photographs and made dozens of sketches and scale drawings. He collects wings and freezes whole bird specimens for future reference. His thorough research includes observing the habits of resident mallards on the bayou behind his home as they preen, bathe and nest in their natural environment. His keen ability to reproduce even the smallest detail of his birds' anatomies reflects his desire to strive for technical accuracy.

Bender's painting career began during his last year at Trinity University in San Antonio, though he has been sketching all his life and had taken drawing as an elective in college. It was a professor there, he says, who encouraged watercolor as a medium of expression. Though influenced by several artists, he has developed his own style because, he says, it is the artist's personal feelings that are transmitted through his talent, thereby making his style his own.

As a relentless critic of his own work, he attributes his success to persistence, for the field of wildlife art is extremely competitive. There are approximately 100 top wildlife artists in the country, and their number is slowing growing. Bender emphasizes that the visual impact of his painting is only one aspect. His love of the outdoors especially addresses those who have experienced the same feelings. "Anyone who has been duck hunting early in the morning and seen the birds rise majestically of the marsh will appreciate the feeling I try to convey," he notes.

There's lagniappe for the friends who correspond with Bender, as he personalizes his letters with tiny, meticulous paintings of birds in flight.

At last year's annual Federal Duck Stamp Competition in Washington, D.C. , Bender emerged 25th out of 1515 entries from across the United States. Enduring three rounds of rigorous judging, he originally attended in order to observe and learn, never dreaming that his entry would place. "This was my first effort in this prestigious national event, and I'm very encouraged," he commented.

In the juried Oklahoma Wildlife Art Festival, held in February in Tulsa, he completely sold out all the paintings he had exhibited, a fact which confirms the appeal of his talent.

Having lived in St. Tammany Parish for three years, Bender appreciates opportunities which the locale offers for pursuing his profession. "In a large city there's no way the same resources would be available to me such as ducks in my backyard and the large group of hunters in the area."

Bender is a modest man who will only reluctantly admit to the accolades he's earned and barely confess to the patience and painstaking research required long before his brush ever touches the paper. "

Since that article appeared in St. Tammany Farmer 32 years ago, he has accomplished much in the sport of skeet shooting.  At the time of the article, he had already won three straight National Collegiate Shooting Championship titles, from 1979 through 1981, and was a member of the United States national team for competition at the 1979 and 1981 World Championships.

Bender is originally from California, having grown up in Orange County, south of Los Angeles. He started shooting skeet with this father in California at 11 years of age, then went to college on a scholarship to Trinity University in San Antonio, Texas. He lived in Louisiana between the years 1982 and 1996.

When asked if he considered his skills in skeet shooting a natural ability, he said no. "Everybody can be great at what they do, I just out-worked the competition. The extra effort involved is aided by a passion for the process, among other variables," he commented.

While competitive shooting does not normally involve traveling to different parts of the world, he has gone to international competitions in a number or countries. He has won the Overall Championship in Canada, England, Australia and New  Zealand. "Going to those places is a result of my desire driving me, and the desire to globally spread my exposure. My coaching, especially in the last ten years, has increased my global travel," he explained.

He began coaching skeet shooting to improve his income, since clay target shooting is not a "high income" sport. Even winning World Championships won't sustain anyone, he stated, so to make a living, the only avenue is coaching. "The ability to coach has zero to do with the ability to compete," he explained, "but my competing led to my life's work (in coaching.)"

When the competitive shooting took off, he had to put his artistic endeavors painting wildlife scenes on hold. "The on-going dedication to being the best in a sport and the associated coaching require 100 percent of my time," he noted.

While the world of painting wildlife art and competitive skeet shooting may seem far apart, he said that whatever an individual decides to do should be approached with dedication and commitment. "We are learning every day, and that continues even in the peak of one's career," he said.

Since his business is now global (teaching in the United Kingdom, Australia and New Zealand annually), the internet has become indispensable in helping him maintain his schedule, get information out to those who need it, and provide avenues of communication with new and current clients. "My business could not survive without the internet," he said.

When asked what's his advice to young people seeking success in any field of endeavor, he responded, "Work. Have passion for what you do. Setbacks are learning experiences that will make you better in the future. Obstacles are an opportunity for growth."

Many great people have influenced him throughout his career, he said, and he has had the opportunity to work side by side with some of them. They taught him, both through word and action, that hard work and passion will never fail to help a person succeed. His motto for a great career: follow your passion and be the best that you can be.

According to his website, "Todd was named the first Master Instructor for the National Skeet Shooting Association, has been trained by the UK’s Clay Pigeon Shooting Association (CPSA) and is an Honorary Fellow in England’s Institute of Clay Shooting Instructors. Todd is recognized as the leading authority in shooting instruction, and his students have gone on to become World Champion shooters themselves. For 20 years, his series of best selling DVDs have set the standard for instructional shooting videos within the industry. He was inducted into the National Skeet Shooting Hall of Fame in 1999, and in the same year was inducted into the first class of Trinity University’s Athletic Hall of Fame.

As of 2017, Bender competes, coaches, and authors articles on the subject for the Skeet Shooting Review, Shotgun Sports and Clay Shooting UK. His website is located at Todd Bender Performance Systems International. 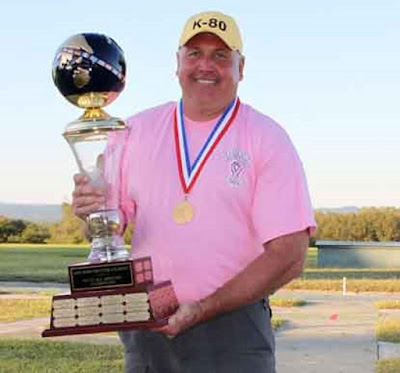 Todd also helped develop skeet shooting’s Wounded Warrior Day, an event for active duty soldiers recovering from injuries sustained in action. He is also the current Moving Target Shotgun Coach for the Elite Teams of the US Navy SEALs.

CLICK HERE for a display of his instructional DVD's.