Elizabeth Malone cared a lot about Covington. She had a vast knowledge of the faces of many area residents, since she hand-colored the black and white portraits of many of them taken by photographer Hazel Ogden. She was also very active in a number of community organizations. Here is an article about her from 1992... 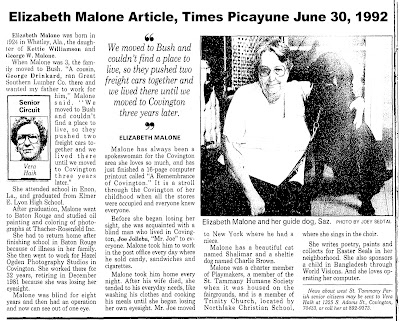 Click on the image to make it larger and more readable.
Text from the above article:
Elizabeth Malone by Vera Haik

Elizabeth Malone was born in 1924 in Whatley, Ala,, the daughter of Kettle Williamson and George W. Malone.
When Malone was 3, the family moved to Bush. "A cousin, George Drinkard, ran Great Southern Lumber Co. there and wanted my father to work for him," Malone said. "We moved to Bush and couldn't find a place to live, so they pushed two freight cars together and we lived there until we moved to Covington three years later."
She attended school in Enon, La., and graduated from Elmer E. Lyon High School. After  graduation, Malone went to Baton Rouge and studied oil painting and coloring of photographs at Thacker-Rosenfeld Inc.
She had to return home after finishing school in Baton Rouge because of illness in her family. She then went to work for Hazel Ogden Photography Studios in Covington. She worked there for 32 years, retiring in December 1981 because she was losing her eyesight.
Malone was blind for eight years and then had an operation and now can see out of one eye.
Malone has always been a spokeswoman for the Covington area she loves so much, and has just finished a l6-page computer printout called "A Remembrance of Covington." It is a stroll through the Covington of her childhood when all the stores were occupied and everyone knew everyone.
Before she began losing her sight, she was acquainted with a blind man who lived in Covington, Joe JoReba, "Mr. Joe" to everyone. Malone took him to work in the post office every day where he sold candy, sandwiches and cigarettes.
Malone took him home every night. After his wife died, she tended to his everyday needs, like washing his clothes and cooking his meals until she began losing her own eyesight. Mr. Joe moved to New York where he had a niece.
Malone has a beautiful cat named Shalimar and a sheltie dog named Charlie Brown. Malone was a charter member of Playmakers, a member of the St. Tammany Humane Society when it was housed on the fairgrounds, and is a member of Trinity Church, located by Northlake Christian School, where she sings in the choir.
She writes poetry, paints and collects for Easter Seals in her neighborhood. She also sponsors a child in Bangladesh through World Visions. And she loves operating her computer. Times Picayune/ June 30, 1992
She wrote the poem "Ode To Covington" which was published in the Greater Covington Area Chamber of Commerce magazine in 1985. 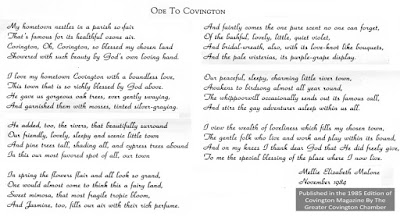 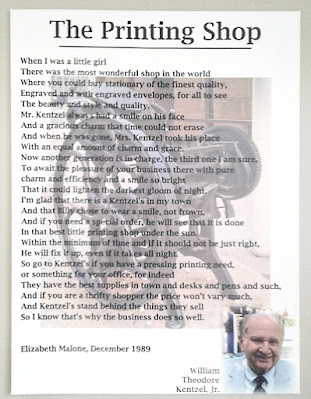