The passenger and express boat "Belle Isle" offered a busy schedule up and down the Tchefuncte River in 1912. Click on the image to make it larger.

One of the stops between Covington and Madisonville was Demourelle's. It was a brickyard in the early 1900's, probably about halfway between Madisonville and Covington. By 1909 it had a school of its own, and later had a drinking establishment. In 1916, there was a Marine company encamped there for a while. 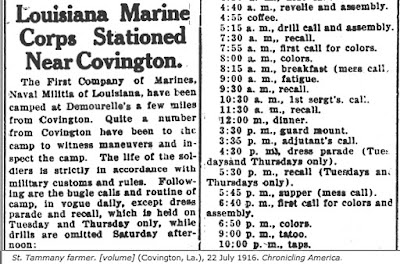 Pineland Park had a 1,500-acre farm and a resident physician. Available activities included boating, fishing, swimming and horse races. All of this was available for $1.50 daily, $10 weekly or $35 per month. A portion of the Beau Chêne Oak Golf Course is located where the racetrack was. The popularity of Pineland Park was short-lived. The railroad came and as a result lake trade and boat excursion business declined. Unfortunately, Samory soon was bankrupt.

A gentleman named Harrie Hayden bought Pineland in 1905. He had a 103-foot yacht built in Boston to carry guests to the resort. It was named the “Pineland”, captained by Joe Ballam of Madisonville. 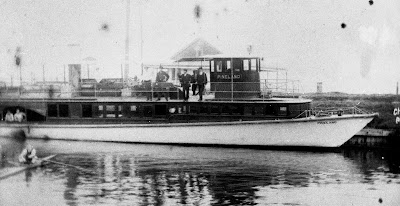 Hayden eventually ceased to operate Pineland, and later moved into a home above a lumber mill. He operated the mill store and post office in Houlton, an area west of Beau Chêne. In 1930, he sold the Pineland home and 10 acres to Frank Otis, who called it Fairview. Today, it is a museum adjacent to Fairview State Park, located one mile west from the Beau Chêne Marina gate. 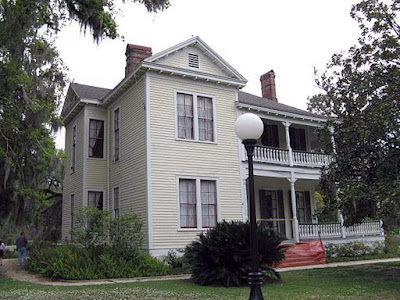 The acreage that made up Pineland Park is now called Beau Chene subdivision.
Houltonville
One of the busiest places on the Tchefuncte River was Houltonville,  a little upstream and around the bend from Madisonville. Houltonville was a community created when the Houltons, Charles and William, from Duluth, Minnesota bought Jay’s Sawmill and the Otis house from W.T. Jay. Houltonville had a general store, post office, schoolhouse, and 3 churches – including Penn’s Chapel. 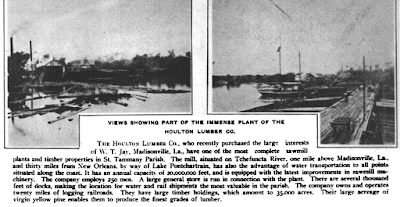