Here's a group photograph taken by Gene Guccione of the 1960-1961 faculty members of Covington Middle School on Jefferson Avenue, which is now the C. J. Schoen School System administration offices. 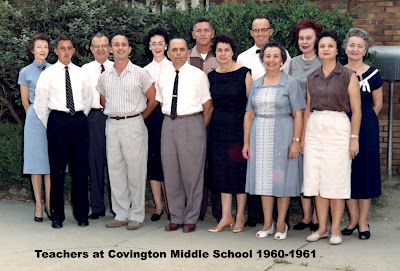 Over on Facebook, the names of some of the people in the picture were said to be Alfred Dubussion, Troy Jackson,  Mrs. Audrey Alexius, Mrs. Webb, Mrs. Fitzgerald, Mr. Creek, Ronnie Pogue, Mrs. Borne, Ms. Spinks, and Johnny Foster.