When The Governor Visited St. Tammany Against His Will 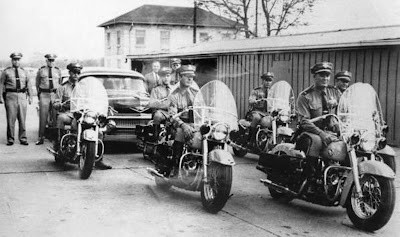 Governor Long In The Spotlight

Earl Kemp Long served as the 45th Governor of Louisiana and was known for his "Uncle Earl" personality, which consisted of a folksy demeanor and “colorful” oratory.

According to Wikipedia, “Long was well known for eccentric behavior, leading some to suspect that he had bipolar disorder. In his last term in office, his wife, Blanche Revere Long , and others attempted to remove him on the grounds of mental instability.”

Governor Long was subjected to a lunacy hearing in the Summer of 1959 held in Covington at the Junior High School (now the School Board Office on Jefferson Ave.)

“For a time, Long was confined to the Southeast Louisiana Hospital in Mandeville, but Long was never formally diagnosed with any mental disorder.”

While confined in the psychiatric hospital, Long kept his political machine running via telephone. After leaving the hospital, (he fired the hospital superintendent and the state director of hospitals to bring that about), he stayed for a short rest and took meetings at the Southern Hotel in downtown Covington, naming it the temporary “state capitol of Louisiana.” But after the hearing was over, he made the Pine Manor Motel his headquarters south of town on U.S. 190 for several days, the second “temporary” state capitol. 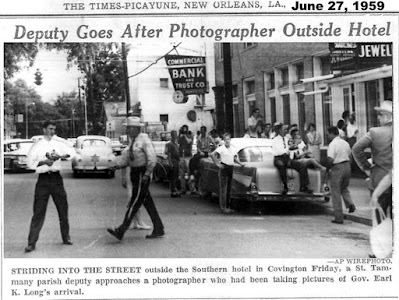 As a result of all the commotion, Covington, the site of the hearing, became a media circus. News media from all over the country came to cover the hearing, with much of the action centering on the Southern Hotel . 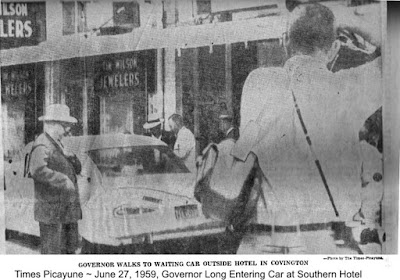 The late Mary Busby Frindik found this photo in her Andrew Erwin Collection of Photos. She loved the Southern Hotel and stated, “If those walls of that majestic building could only talk, we would hear generations of history that would touch many of us!” The following photo was taken by Art Lemane for The St. Tammany Farmer and published on July 3, 1959, showing Governor Earl K. Long sneaking out the side door of the hotel to avoid the press. 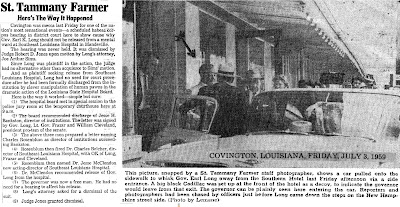 Click on the images to make them larger and more readable.
The Farmer printed a handy step-by-step guide of the goings on:
St. Tammany Farmer - July 3, 1959: Here's The Way It Happened
Covington was mecca last Friday for one of the nation's most sensational events --  a scheduled habeas corpus hearing in district court here to show cause Why Gov. Earl K. Long should not be released from a mental ward at Southeast Louisiana Hospital in Mandeville.

The hearing was never held. It was dismissed by Judge Robert D. Jones upon motion by Long's attorney, Joe Arthur Sims.

Since Long was plaintiff in the action, the judge had no alternative other than acquiesce to Sims' motion. And as plaintiff seeking release from Southeast Louisiana Hospital, Long had no need for court procedure after he had been formally discharged from the institution by clever manipulation of human pawns in the dramatic action of the Louisiana State Hospital Board.

Here is the way it worked—simple but sure:

(1) The hospital board met in special session in the police jury room at the temporary courthouse here at 9 a.m.

(2) The board recommended discharge of Jesse. H. Bankston, director of institutions. The letter was signed by Gov. Long, Lt. Gov. Frazar and William Cleveland, president pro-tem of the senate.

(3) The above three men prepared a letter naming Charles Rosenblum as director of institutions succeeding Bankston.

(4) Rosenblum then fired Dr. Charles Belcher, director of Southeast Louisiana Hospital (in Mandeville), with OK of Long, Frazer and Cleveland.

(6) Dr. McClendon recommended release of Gov. Long from the hospital.

(7) The governor was now a free man. He had no need for a hearing to affect his release.

(8) Long's attorney asked for a dismissal of the suit.

(9) Judge Jones granted dismissal.
End of Farmer's summary
Ted Talley recalls Norma Core describing the1959 'courtroom' event in the old gym. She was covering Covington news for the Bogalusa Daily News then and she described how she shooed some 'big city" reporter out of his seat (in the limited press "corps" seating) and mildly scolded him.
"Since she represented the local media she trumped him in seating priority! Of course there was NO seating priority in this make shift, quick hearing arrangement," Talley said. "This was NOT the White House briefing room. It was the old gym on Jefferson Ave. But she had a point. Norma took her place up front just as UPI's Helen Thomas used to take her place up front at the White House."
Many locals were caught up in the excitement, wanting to have a look at the goings-on at the school gym/courtroom, but they were crowded out by the national press corps. Except for one Mandeville lady. Ted Talley goes on to relate how she got in on the press coverage.
"I recall one story about Betty Cordes," Ted shared. "Her husband Paul (who later went on to become Mayor of Mandeville) told her to please NOT go into Covington while this 'commotion at the hearing' was going on.
"Well Betty had to go into Covington anyway she said to pick up a dress at Yvonne Haik's (or something like that). Her children Paulette and Paul Jr. were not with her, but she had 'baby' Elizabeth in tow.
"Curiosity got the best of Betty so after her errand on Columbia or Boston St. she went over to the old school where the hearing was being held. She figured she would enter the gym from the back. She just wanted a peek and then would head home to Mandeville."
The gym had two back doors that opened onto the playground at the rear of the building, Talley explained.
"Just as Betty opened the door, the governor, his entourage and members of the press came flooding out. They were using the back exit to presumably avoid the crowds at the front on Jefferson. Betty found herself being pressed back by those exiting and came almost face to face with Earl.
"The news camera flash bulbs were popping to catch the governor's quick exit after the brief hearing. Betty had her back to the cameras. So she thought she would be 'safe'...no proof of her presence. Not so.

"The very next morning splashed on the front page of the Picayune was a large photo of Earl K. Long exiting the 'courtroom'...and there in the foreground, smiling so pretty at the camera, was baby Elizabeth Cordes over her mother's shoulder. Betty had been 'caught'.
"The phones were ringing into Mandeville from the Cordes and Skelly relatives in New Orleans: "We saw little Elizabeth and Betty on the front page of the paper this morning. How adorable!" That was not the sentiments however from Paul Sr.," Talley concluded. Heck, the wire services probably picked up the photo and it could have been all over the country that morning.
By the end of the Governor’s visit to Covington, all the state officials, news media, and half the nation were familiar with the name of the Southern Hotel, the temporary home of Gov. Earl K. Long and “state capitol of Louisiana” for a day.

Rev. Baxter Pond, a beloved area pastor at the time, recalled his meeting with Governor Long during those troubled days. It was perhaps one of his most notable counseling sessions. Rev. Pond was called to the Governor's motel room, and "When I  went up to his room, the smoke was three feet high. Earl was sitting up in bed."

Long said in a raspy voice: 'You the preacher. I've seen psychiatrists, I've been through them all.' He bowed his head and I said, "Bless our gover­nor, physically, materially, and all other ways. I was going to say mentally, but left it out. He knew more scriptures than many preachers. We prayed! He told me things I could never tell."
They talked on the telephone a few times after that, and Pond was invited to the governor's mansion but never went. "I gave him a small Bible. When I heard that he had died, I wondered if he had the New Testament with him," Rev. Pond said.