Opening Up The Abita River

In 1910, a group of Abita Springs residents thought it would be a good idea to open up the Abita River to boat navigation from its merging with the Bogue Falaya River all the way to Abita Springs. 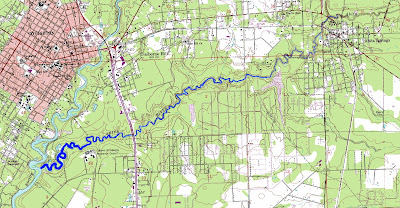 It seemed like it would be a great help to businesses, residents, and visitors who wouldn't have to get off a boat in Covington, then ride three miles over to Abita Springs. Local citizens figured there was no harm in asking. 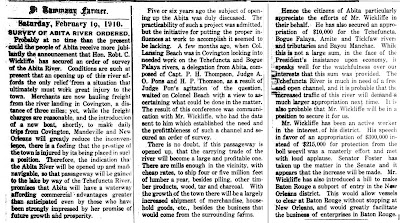 Text from the above article:
St. Tammany Farmer- Saturday, February 19, 1910

Probably at no time than the present could the people of Abita receive more jubilantly the announcement that Hon. Robt. C. Wickliffe  has secured an order of survey of the Abita River.

Conditions are such at present that an opening up of this river affords the only relief from a situation that ultimately must work great injury to the town. Merchants are now hauling freight from the river landing in Covington, a distance of three miles; yet, while the freight charges are reasonable, and the introduction of a new boat, shortly, to make daily trips from Covington, Mandeville and New Orleans will greatly reduce the inconvenience, there is a feeling that the prestige of the town is injured by its being placed in such a position.

Therefore, the indication that the Abita River will be opened up and made navigable, so that passageway will be gained to the lake by way of the Tchefuncta River promises that Abita will have a waterway affording commercial advantages greater than anticipated even by those who have been strongly impressed by her promise of future growth and prosperity.

Five or six years ago the subject of opening up the Abita River was duly discussed. The practicability of such a project was admitted, but the initiative for putting the proper influences at work to accomplish it seemed to be lacking. A few months ago, when Col. Lansing Beach was in Covington looking into needed work on the Tchefuncta and Bogue Falaya rivers, a delegation from Abita, composed of Capt. P. H. Thompson, Judge A. 0. Pons and H. P. Thomson, as a result of Judge Pon's agitation of the question, waited on Colonel Beach with a view to ascertaining what could be done in the matter.

The result of this conference was communication with Mr. Wickliffe, who had the data sent to him which established the need and the profitableness of such a channel and secured an order of survey.

There is no doubt, if this passageway opened up, that the carrying trade of the river will become a large and profitable one. There are mills enough in the vicinity, with cheap rates, to ship four or five million feet of lumber a year, besides piling, other timber products, wood, tar and charcoal. With the growth of the town there will be a largely increased shipment of merchandise, household goods, etc., besides the business that would come from the surrounding farms.

Hence the citizens of Abita particularly appreciate the efforts of Mr. Wickliffe in their behalf. He has also secured an appropriation of $10,000 for the Tchefuncta, Bogue Falaya, Amite and Tickfaw rivers and tributaries and Bayou Manchac. While this is not a large sum, in the face of the President's insistence upon economy, it speaks well for the watchfulness over our interests that this sum was provided.

The Tchefuncta River is much in need of a free and open channel. and it is probable that the increased traffic of this river will demand a much larger appropriation next time.  It is also probable that Mr. Wickliffe will be in a position to secure it for us.

Mr. Wickliffe has been an active worker in the interest of his district. His speech in favor of an appropriation of $300,000 instead of $215,000 for protection from the boll weevil was a masterly effort and met with loud applause. Senator Foster has taken up the matter in the Senate and it appears that the increase will be made.

Mr. Wickliffe has also introduced a bill to make Baton Rouge a subport of entry in the New Orleans district. This would allow vessels to clear at Baton Rouge without stopping at New Orleans, and would greatly facilitate the business of enterprises in Baton Rouge.
-end of article-

But after several months, the study was done, and the answer was not too favorable.

Text from the above article:

Washington, Jan. 13.—The Abita Springs proposition to have the Abita river made navigable to Bogue Falaya has been disapproved by the army engineers. They say the project would cost too much.

The Abita Springs representatives, in their arguments, said the railroads discriminate against it in favor of Covington, and they wanted to be on an equality with Covington. They thought the improvement would lower rates on fuel to New Orleans.

The engineers sent to examine the proposition said that while it would be a fine thing, they could not see that the government would be justified in spending the money to bring it about, because the benefit would be entirely local.