In today's Tammany Family article, Phil Pfeffer shares another memory of Covington in the mid-twentieth century. This account deals with the Covington Invitational Basketball Tournament of the 1950's. 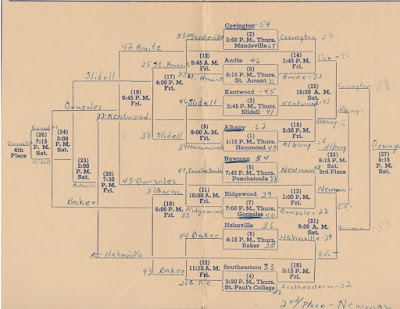 Game times were set up so that Covington high school always played their first game on Thursday afternoon during school time. Students were let out of class to attend the game (and pay their admission). It was also set up so that if CHS lost they would play on Friday morning, if they won they would play on Friday afternoon. Either way, students could again attend the game. In the late 1950s, Covington high school actually won its own tournament several years in a row.
Games were played in the old gym which was attached to the main school building. On the north east corner was the boy’s dressing room. On the southeast corner was the girl’s locker room which was commandeered for one of the visiting teams. The gym was unique in that it had a balcony that surrounded the court. It actually overhung the side of the playing area by six-inches to a foot, making an inbound pass difficult at times. The backboards were metal and fan shaped units, not like the rectangular, wooden backboards found elsewhere. Glass backboards were still in the future.
The balcony had numerous two-tier benches along both sides which were constructed by the school’s wood-working classes. At the southwest corner of the balcony were a Coke machine and a 7-Up machine. On the north east corner, tables were set up to sell candy and hot dogs during tournament time.
Teams from Hammond, Ponchatoula, Albany, Bogalusa, Franklinton, Slidell and others could travel to Covington in about thirty minutes and return home between games. St. Paul’s participated every year. However, teams from New Orleans or Baton Rough had a longer travel time. The Pontchartrain causeway was not there until the late 1950s so New Orleans teams had to travel around the lake through Slidell, a two-hour journey, one way. From Baton Rouge area it was also two hours because the Interstate highway system was not yet available.
To alleviate the travel problem, local families were asked to house individual (or a couple) visiting players for a couple of nights, giving them food and a place to sleep. Many families stepped up. It was particularly exciting for a young boy in the family who aspired to play some day on the high school basketball team.
One memorable (or maybe forgettable) occasion was when the boys from Baker high school near Baton Rough stole the Abita Springs fire truck. They were kind enough to leave it at the traffic circle approaching Baton Rouge.
There were a lot of good and great players who participated in the annual tournament. Many of them went on to play college ball. The most famous of these young boys played for Baton Rouge high and was selected the MVP of the tournament in the early 1950s. He was slightly over 6-foot, five-inches tall then but still growing. He played for L.S.U. and was all-American. He had a distinguished career with the Milwaukee/Saint Louis Hawks in the NBA. L.S.U. retired his jersey number 50 and a street on campus bears his name. That was Bob Pettit.
Posted by Ron Barthet at 6:30 AM