There will be a hot time in the old town of Ponchatoula on the nights of April 2 and 3. Lively dancers from all over the state will Rip and Snort, Look Her In The Eye, Whirl-away, Circulate, and Pull Her By.

If this sounds like fiddle‑faddle or flap-doodle, it is because, you are not 'familiar
with square dancer-lingo, not having participated in one. And if you want to know what fun you are missing, ask a Lucky Square, a Tammany Twirler, a Square C or perhaps a Traveling Koonass.

These are all members of an exclusive set called square dancers, many of whom will be Boxing the Flea or Swatting the Gnat at the 6th annual Ponchatoula Strawberry Festival.

Welcomed by the Ponchatoula Promenaders who will host the Festival Square Dance. On the night of April 2, beginning at 8 p.m. state-wide square dancers Brake and Trail at the Vineyard School on Highway 22, where the Gold Dust Twins of Metairie, Tony diGeorge and Stanly Viola, will be the callers. On April 3, they will swing their partners on to the next, at the St. Joseph School gymnasium. Here the caller will be Neil Howard of Houma, whose unusual talent as caller is aptly described by his nickname "Thundermouth."

This may sound rather boring to those who have seen square dances on television, were it is cut-and-dried country nostalgia. It so lacks the spontaneous appeal that few realize that in 1976 there are well over six million Americans who readily understand when a caller tells them to Roll-Away or Right Hand Star.

Even fewer in the TV audiences know that such folk dances are very very old. In fact, these folk dances were ancient even when Great-grandma was a pretty little taw. They date back to the 12th century at least. The "London Bridge" song of children was once a tune for these dances. And "Old Dan Tucker" was a human sacrifice song at a time when the dancers were swordsmen. The unfortunate who was in the center of the circle when the dance ended was the Old Dan who quite literally lost his head.

Some of the early dances were religious, but the Puritans thought them evil and sought to have them abolished. But they were too much fun for the common folks, and eventually became stylish in the royal court of France. The folk dances came across the Atlantic with the colonists, and it was they who added "the caller."

The caller shouted directions to the dances, adding to the merriment with his own particular patter which always had pure country flavor. He told of a "chicken in the bread pan, pecking in the dough, join your hands and do-si-do." He mentioned "whiskey in a barrel, whiskey in a jar, all join hands and form a star." Often his patter included directions. "Meet your honey...pat her on the head...if you can't get a biscuit..give cornbread."

Only those in the know understand that "biscuit" was another way of saying "swing her by the waist." If she was not within reach, cornbread would do. It was a two-hand swing.

Since the folk dances have survived for centuries, it is no surprise that St. Tammany and surrounding parishes have had several dance groups. The names that were selected for these groups are interesting and amusing: From Covington comes the Ding-A-lings, the Chain Gang, the Pine Partners, and the Square C's. Equally amusing are the Star Steppers and Tammany Twirlers of Slidell and the Lucky Squares of Mandeville.

From other parishes were the Tango Taws and Raws of Hammond, the Buttons and Beaus of Independence, and the Eight Chain Thru Club of Loranger. The popularity of square-dancing can be seen by the Square C's of Covington. A small party met in 1973 for a "Green Night" held by national caller Johnny Creel of Metairie. Twenty-three people decided to take lessons. They "graduated" in January of 1974, and at present there are 52 Square C's.

The Lucky Squares of Mandeville first formed their club on an unlucky day. It was Friday the 13 of September in 1968. To counteract the hex, they adopted a four leaf clover as their symbol. It seemed to have worked for there are six couples going so strong that they call themselves a traveling club. Ten of its members took in the Azalea Trail Festival in Mobile, Ala. after Mardi Gras. They hope to be at the Strawberry Festival also.

The 7 year old Lucky Squares and the Ponchatoula Promenades seem to share a thing with the number 13. The Ponchatoula group had an anniversary dance on Friday the 13 of February last, celebrating their start of 7 years of dancing. This is the group that will host the dances on April 2 and 3.

Honor Given
The Ponchatoula Promenaders are quite proud of an honor given to them for 2 past
festivals. Two of their number are semi-retired Strawberry farmers who have been selected as Strawberry King. Charles Keaghey wore the crown in 1974, then passed it on to Carl Drude Sr. for the '75 celebration.

The Ponchatoula group does not dance for fun only. The Dixie Chain and Double Circulate as entertainers, appearing at the nursing homes for elderly people. 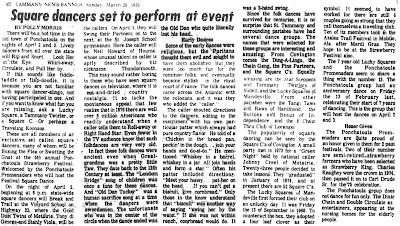 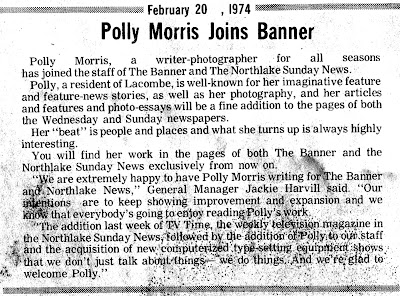