Bob Landry, who at one time was editor of the St. Tammany Farmer newspaper, penned this interesting history of train travel in the early days in St. Tammany Parish. Click on the image to make it larger and more readable.

Remembering the Railroad By Bob Landry

The trip from nearby New Orleans to that pastoral land across Lake Pontchartrain was not an easy one at turn of the 20th century and before. When the automobile came into popular use and the steam-­powered ferry boats grudgingly gave way to this latest mode of transportation, the route was a tedious one via two decrepit wooden ferries at Chef Menteur arid Rigolets.

Travel then was more of an adventure than an outing. Then along came the railroad, opening up leisurely travel to the real outdoors- - - the wide open spaces with exhilarating air and refreshing woodsy fields to accommodate the largest of family picnics.

It was a steam passenger train, making stops at the ten tiny villages like Bonfouca and Lacombe. For a dollar, a rider could make the trip from New Orleans and return on weekends, on what was called an "ex­cursion."

Most popular spots were Abita Springs and Man­deville, the first for its huge park with flowing well, and the latter for its enticing beachfront attractions. For picnickers, Abita was the ultimate. Swimmers found Lake Pontchartrain at Mandeville a cooling haven, in Summer, with the shoreline studded with bath houses on long piers jutting out over the water. There you could rent bathing suits and have a place to change clothes.

The biggest thrill outside of Mandeville's soft shell crabs, speckled trout and old- fashioned barrooms was a giant slide out in the lake, where a board propelled you from a 40-foot height into the water. Abita Springs picnickers usually came with glass jugs to return home with that sparkling clear water from the flowing wells.

Huge trees shaded the park and covered pavilions furnished protection from the sun and rain. Dances were popular day and night at Abita, and people came from miles around, natives joining with visitors.

Covington was the "big city" of St. Tammany Parish back then, not even approached by Slidell. It was a place of excellent restaurants and pretty good bootleg whisky during prohibition. Sometimes you could buy the "real thing."

It was fashionable to visit Covington on weekends, and a necessity in bygone days when old settlers from miles away journeyed to St. Tammany's capital to purchase their staple provision, expected to last for months back home in the boondocks. 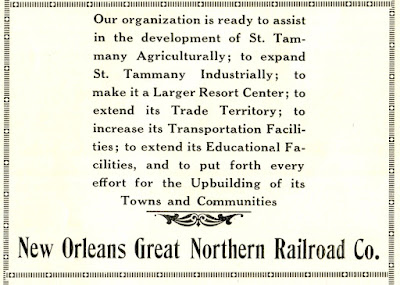 The New Orleans Great Northern Railroad Co.
An advertisement from 1926
The modern age of rail-travel came to St. Tam­many around 1930. The Gulf, Mobile ' Northers had just merged with the NOGNRR, and the new owners inaugurated a gas-electric train on the Shore boasted two power units, a baggage-passenger car and two regular coaches. The observation coach was called a "parlor" car, with an open platform at tail end of the train.

The entire unit was painted silver and red, in the tradition of "The Rebel," the South's first streamlined train that ran from Jackson, Tenn. to New Orleans via Jackson, Miss., Bogalusa and Slidell. The power units were the largest ever built by famed J.G. Brill Co.

Eventually, the GM&NRR merged with the Mobile & Ohio RR to become the Gulf, Mobile & Ohio, and now what's left of the original line has been taken over by the Illinois Central Gulf RR.

Today, there is no longer any passenger service on the original New Orleans Great Northern, which in addition to its mainline run from Jackson, Miss. to New Orleans, also had the "Bogue Chitto Branch" from Rio to Tylertown, Miss, and the Shoe Line.

SPECIAL — The St. Tammany "Linen Suit Special" made this im­pressive appearance on the Shore Line of the GN&NRR around 1930, replacing the older steam-powered passenger trains. Painted silver and red, it was an innovation in rail travel in the area for a half dozen years, until the depression caused train patronage to decline.

According to a wall poster in the Mandeville Trailhead Visitor Center: 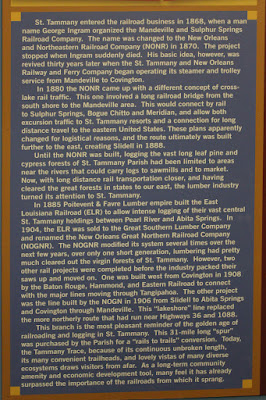 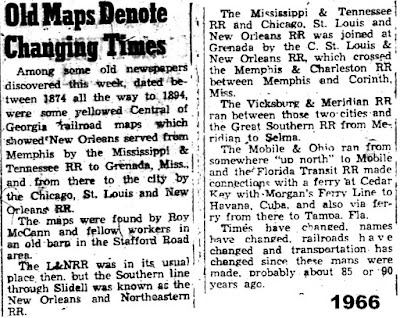