In 1976, the Covington B&PW published a series of articles about the outstanding women in St. Tammany Parish. Here is the article they wrote about Annie Pennington Koepp of Madisonvillle.

The Covington Business and Professional Women's Club has selected a group of women from St. Tammany Parish to honor as part of their Bicentennial celebration. Chosen were women whose lives exemplified love of home, family and community and whose special efforts helped  make St. Tammany Parish a better place in which to live. Such a woman is Annie Pennington Koepp.

Born just before the turn of the century, she was first of the nine children of Dr. and Mrs. G. A. Pennington. While still a small child, she moved with her family from New Orleans to Madisonville where Dr. Pennington chose to practice medicine following his graduation from Tulane Medical School. 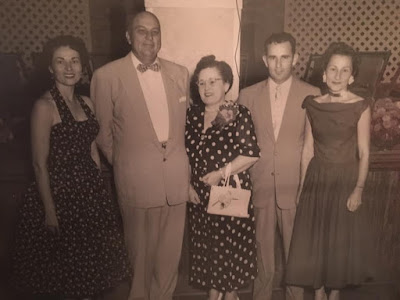 With her children and husband-Mayor Charles Koepp

To know Annie Koepp was to be her friend. My own association with her was mainly in recent years through her contributions of talent and effort to the Covington Garden Club. Gentle of manner, soft spoken and quick to smile, she was always on hand with products of her green thumb for garden shows and exhibits as well as to pass along valuable information about plants and flowers.

Her smiling face, encircled by softly curling white hair, her patrician prettiness and her unfailing spirit of helpfulness endeared her to her friends and fellow club members who regret that she must now spend her days quietly as a patient in the Nursing Home. So, over her aging years is spread the glow of fond memories that sum up a lifetime well spent.

Her sister, Shirley Pennington Faulk, kindly consented to go through Annie's scrapbooks and gather for us information from the clippings she saved through the decades.

Her grammar school and Junior high education took place in Madisonville, and she later attended high school and graduated in Covington. Nearly all of her subsequent activities: family, church, school and civic, were devoted to the community of Madisonville. It was there she married Charles Koepp, who was to become mayor of that town. And there she brought up three children, Marilyn Koepp West, Charles Koepp and June Koepp -Bergeron.

Perhaps outstanding of all her interests was her abiding work with the Madisonville
Presbyterian Church. She served as President of the Women's Auxiliary and was so devoted to her church that she was elected District Chairman of Women's Work of the Presbytery and was later awarded Life Membership in Women of the Church for her lasting and loyal service.

During World War II she was made general Chairman of the Red Cross, organized the Home Nursing Course, directed the group that rolled bandages and under her leadership MadisonVille was commended for its outstanding contribitions to that organization.

She recognized the ever present need to help the youth of her community and did so while her own children were growing up and long afterwards. She organized the Youth Club and funded it herself so that the young people could have wisely chosen and chaperoned ac­tivities. Later, seeing the success of her efforts, the Police Jury commended her on this and made contributions for its continuance.

Annie was asked to head just "about every drive that came to Madisonville and she readily accepted. She supervised and spearheaded drives for the Cancer Fund, March of Dimes, United Fund and the Symphony. She took a special joy in aiding the Crippled Children's Fund through the Easter Seal Drive of which she was the continuing Chairman.

It was through her efforts that the Madisonsille branch of The Women's Progressive Union was founded, and during her early years with this endeavor, the Community House built. As early as the 1939 Spring Fiesta Tour, Annie Koepp was accorded recognition for her assistance in making the project a success. She remained active throughout the years with this Tour, serving in many capacities and as hostess in various "Open Houses."

She was a member of the St. Tammany Parish Fair Board and was very active on its committees, serving as chairman of quite a number them. During more recent years she maintained a booth at the Fair, winning prizes and awards, and in 1972 she won the Tri-Color for her exhibits.

She maintained an avid interest in the history of Madisonville and of St Tammany Parish and accumulated a treasure trove of clippings along historical lines which she eagerly shared with other interested persons.

Annie Koepp embraced so many projects that it is impossible to cite them all, but she was also a member of the Auxiliary of the Madisonville Fire Department and served on the Board for the T. J. Dendinger Cemetery and was most active in seeing to its upkeep and preservation.

Club work was a large part of her life, and she was a member of the Delphians in Covington, worked on the Library Board to push for a branch in Madisonville, and was also a member of Happy Homemakers and of Playmakers. Perhaps her greatest interest, aside from church work, was in the realm of garden clubs, and she belonged to the Madisonville Garden Club, Home and Garden Club of Tchefuncta, Whispering Pines in Mandeville and the Covington Garden Club.

Annie Koepp won numerous awards in connection with these clubs. In I971-72 she was "Arranger of the Year" for the Covington Garden Club and in 1972-73 she won the coveted "Woman of the Year" award.

Besides devoting so much of her time and energies to church and civic work, Annie also enjoyed all the aspects of life in this area. Fond of playing bridge, she belonged to quite a few clubs and foursomes. She was a scrapbook enthusiast and any member of her family in search of information pertaining to them was sure to find it in "safekeeping with Annie."

She was truly a remarkable lady in every sense of the word and was perhaps best known for her willingness to share her diversified talents with anyone and everyone in her beloved St. Tammany Parish.

The Covington Business and Professional Women point with community pride to Annie Koepp's accomplishments and are proud to include her among the eminent group of women selected to be honored by them in this the two-hundredth birthday year of the United States of America. 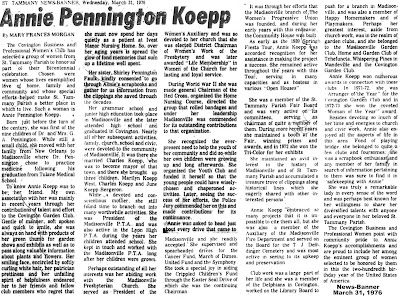