Memories of The CHS Band by Phil Pfeffer

The Covington High School band hall was located on the corner of 18th avenue and Madison street. Those band members who brought their instruments home after school, could bring them back and leave them inside of the band hall before school. If it were locked, they would just leave them on the porch (do that today and someone would steal them). Not all instruments were easy to carry home; the bass drum and the tuba for instance.

The band met every day in the band hall at fifth period; i.e. 1 o’clock to 2 o’clock. They assembled in the large room of the band hall. Ray Wadenpfuhl was the band director. Directly in front of him were the cornets and trumpets. To his left were the clarinets and to his right were the saxophone(s), flute, French horn and trombones. The drums (percussion) was to his left past the cornets and clarinets.  In a similar position to his right were the Baritone(s) and Sousaphones.

For the most part, the band played marches by John Philip Sousa, the March King. On the lighter side, they played ”In the Mood,” “Sing, Sing, Sing” or “The Happy Wanderer.” One favorite in the classical variety was “Zampa Overture.”

The band would play during the home football games, including playing the national anthem. They would perform at half time forming block letters or figures, while an announcer in the press box described the action on the field.

The band was also invited to march in New Orleans Mardi Gras parades. To get to New Orleans, the band had to get a school bus and travel around the lake via Slidell. For their participation, the band received between $75 and $125. 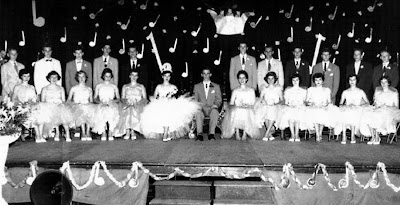 Each spring, the band performed in concert in the high school gym (see 1953 concert program and band members below). Click on the above image to see a larger version.

The 1953 band members consisted of:

The Elementary School Band consisted of: