The 50th Anniversary performance of the Christmas presentation "A Joyful Noise Unto The Lord" was given by Covington's Dancescape Studio Saturday night at the Fuhrmann Auditorium, an appropriate location since the show was dedicated to dance instructor Rosemerry Fuhrmann Hanian, the founder of the Creative Dance Center many years ago.

The dance performance has become an annual tradition in the community, and this one was even more special because of the 50th anniversary celebration, one that brought back many of Rosemerry's former students. Taking part in the production were a number of past members of the Dance Players, a group of young dancers that gave many public presentations throughout Covington over the years. 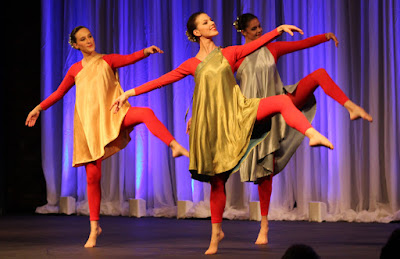 Mrs. Hanian died in 1992, but her memory lives on in the hearts of the many hundreds of young women she taught, and those who are being taught the love of dancing by Rosemerry's former students.

Saturday night's production began with a welcome by Mayor Mike Cooper and former City Council member Patricia Fuhrmann Clanton, Rosemerry's sister. It was a touching moment that set the tone for the night.

CLICK on the text below an audio recording of Mrs. Clanton's remarks about the history of the dance program that has been being presented annually for the past 50 years.


Many of the people in the packed auditorium (standing room only) were there to see their sons and daughters on stage, including the very young who were in the production for the very first time.

The program consisted of several separate dance presentations, some performed to familiar music and some more classical in nature, and several were accompanied by poetry and spoken word. In between dances, vocalists Elizabeth Pearce sang and Roseanne Bivens sang and played her guitar.

Videos of the performance are available from Randy Perkins for $25. Watching the video is the best way to experience the event outside of actually being there.

Rosemerry Hanian was credited as the choreographer, since it was her original work that pulled together the themes, movements, and music that has made the event an annual favorite among Covington area residents.  Jessica and Rebecca Boudreau directed the performance, assisted by Kristen Johnson, Alisha Kennedy and Cassie Rogers. Francis Broussard served as narrator, with Lily Rabalais as the pianist and Heitor Candido as the Program Angel.

CLICK ON THE IMAGE below for an audio recording of how Rosemerry influenced the lives of young dancers. 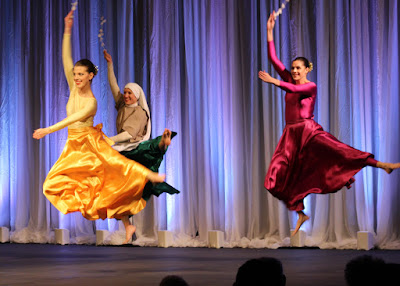 The program being dedicated to Mrs. Hanian was a reminder of the many things the artists of Covington do that become lasting reminders of their talent and commitment, influencing not only those they work with but those in the generations to come. The "Joyful Noise" production began in the St. Scholastica Chapel in 1966, and still launches the Christmas spirit for many who see it each year.

In a reflective passage from The Dance That Refused To Die Desiree Waguespack Maestri said, "What they did not know is that Mrs. Rosemerry looked down on them from heaven and was happy. Although she had passed from this world to the next, her dance lived on at Christmas time through the Dance Players.

"She knew that the beauty of dance lived in the heart and always found a way to express itself. For the beautiful movement of dance must first originate inside a pure and gentle heart. Only then can the exquisite beauty of the dance be shared." 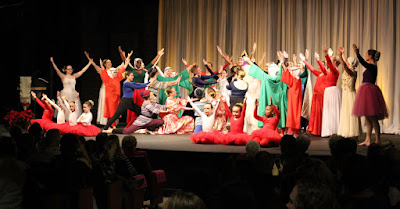