The Our Lady of Lourdes Shrine

Tucked away in the backwoods of northwest Lacombe is the Our Lady of Lourdes Shrine. Here is a picture that was taken of the chapel in the 1920's. 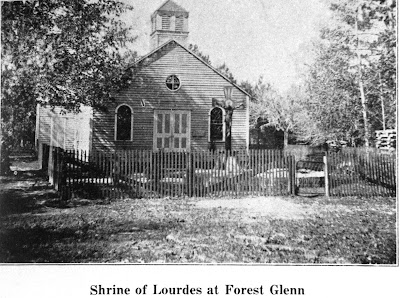 It is on Davis Drive (also known as Fish Hatchery Road) and was built in 1923 by Father Francis Balay. Father Balay was a native of Bordeaux, France.  He was born on December 19, 1875 and ordained in France on October 4, 1904.  He was the first official pastor of Sacred Heart of Jesus Catholic Church.  He built our Lady of Lourdes Shrine in 1923.  According to church members, he was a "dynamic, vivacious and energetic" man who used all of his God given talents to accomplish many goals.

He first arrived in the Lacombe area in 1915 to help in the construction of the Sacred Heart Catholic Church on Main Street in Lacombe. Father Balay, O.S.B. served as pastor of the church between 1919 and 1929. 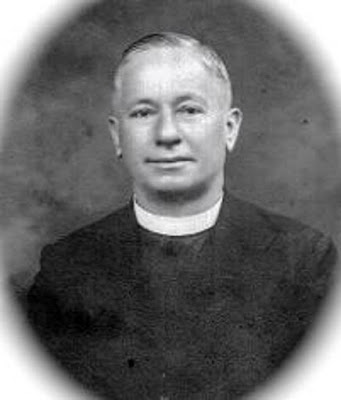 Father Balay thought that building a Shrine Chapel dedicated to Our Lady of Lourdes in the quiet woods around Lacombe would remind people of an area dear to his own heart, his native France near Lourdes. With the help of the members of his church, the Shrine was built in the Lacombe neighborhood known as Forest Glen. One of its most appealing attractions was a spring bubbling nearby, flowing into Bayou Lacombe.
The first mass in the new chapel was held on June 10, 1923.  According to the Center for Southeast Louisiana Studies at Southeastern Louisiana University, the chapel that "served as a pilgrimage throughout World War II was a favorite place of prayer and devotion where believing faith will go to pray to Our Lady and to use the water of the spring that many claim has cured them of spiritual and physical ailments."
In front of the Lourdes Shrine was the fountain offering the water and while originally a wooden fence surrounded the whole area in order to keep out animals, it was replaced in the 1930's by a small iron fence that enclosed only the building. 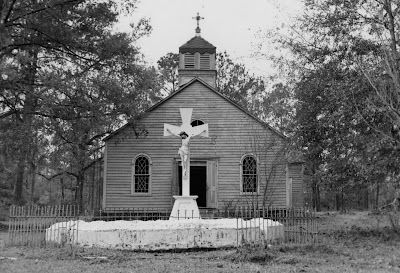 Over the years the chapel became is a favorite place of prayer and devotion, according to Catholic sources. Although marred at times by vandalism and with some items stolen from the shrine, it has been restored and revered by the community it serves.
According to information on the website of the Lacombe Sacred Heart of Jesus Catholic Church, "Several chapels were built by Father Balay, but the one he held closest to his heart was the Lourdes Shrine in Forest Glen, near the Ravinne Creuse north of Lacombe.
The chapel, started about 1920, was established to reach the remnants of Choctaws who lived above Lacombe. The Shrine was fashioned to resemble the shrine in France as much as possible.  Father Balay diverted some of spring's water into a small grotto that he had formed inside the church.  A statue of the Blessed Virgin Mary was placed inside the grotto and above the fountain of flowing spring water. 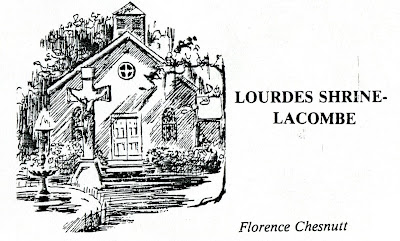 In 1940 when Father Francis Balay was extremely ill and in an ambulance on his way to Hotel Dieu Hospital in New Orleans, he asked the driver to pass by the Lourdes shrine.  Father Bauman related that the priest riding with Father Francis saw him lift himself up and gaze at the shrine.  Father Balay then closed his eyes and died.  His Lourdes Shrine continues to give hope and comfort to many. In the 1950s, large groups from New Orleans made yearly pilgrimages to the Lourdes Shrine in Lacombe.  This practice continued for years; however the shrine suffered a slow decline and was severely vandalized during the 1970s.  During the 1980s a group of concerned Lacombe parishioners undertook a successful campaign to raise money to restore the Lourdes Shrine.

This endeavor was triumphant due to the unceasing prayers and labor of two Lacombe sisters, Alice Buckley and Mary Couret (Perkins). 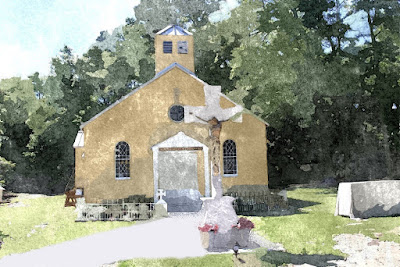 On December 18, 1974, Polly Morris wrote an article about Father Francis and his work in the Lacombe area, including his efforts regarding the Our Lady of Lourdes Shrine. Here is the article she wrote, filled with even more details and facts. Click on the images below for a larger, more readable version. 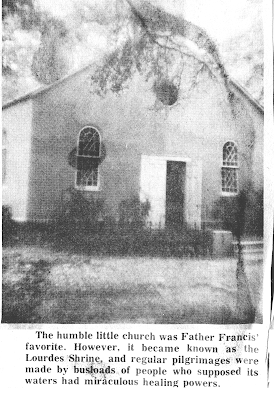 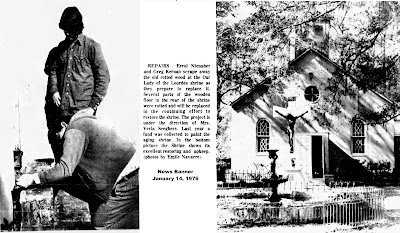