The Covington Heritage Foundation held its annual Gala at the Southern Hotel on Tuesday, Dec. 6, 2016, with Mark Johnson speaking before a packed room about the connections and inter-connections of the people of Covington over the past 100 years. 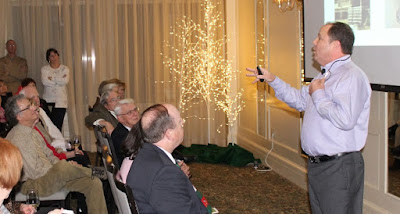 He accompanied his talk with a slide presentation showing the people, businesses, and buildings of key importance in Covington's history, weaving the storyline through several decades and winding up with the calling of the names of many of the people in attendance at the meeting. The room was filled with people who were the children, grandchildren and great-grandchildren of the pioneer Covington families being discussed.

To view more photographs from the event, CLICK HERE.

Johnson launched his talk by focusing on the Elmer E. Lyon family, telling how that led to Lyon High and its achievements and the Covington High Lions fielding many excellent basketball and football teams. Historical highlights came one after another, punctuated by humor, a heaping measure of memories, and a standing ovation to the late Lee Alexius, a foundation officer and City Councilman who died recently.

Mayor Mike Cooper gave the welcome to the event, with President Sharon Nunez conducting the business part of the meeting, including the election of new officers and board members. 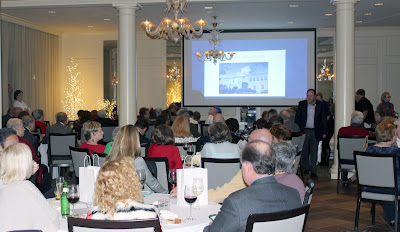 The standing room only crowd filled the meeting room to capacity, and music was provided by the Covington High Talented Music students. Among those in attendance were C. Howard Nichols, Pat Clanton, Ralph Menetre, and Sammy O'Keefe.