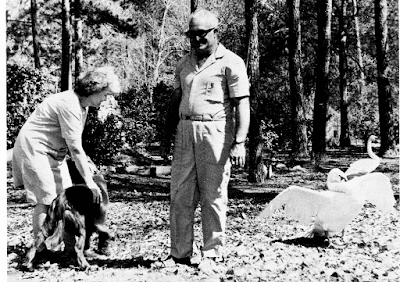 Evelyn (left) and Ernest Casadaban with their Irish Setter and a pair of Polish swans.

In the current furor over ecology, we are deluged, and rightly so, with the wrongs and the dangers from the mismanagement of our natural resources and the effects of this on our wild life population, and ultimately upon ourselves.

It is refreshing and encouraging to meet and become acquainted with individuals doing something positive, quietly and carefully, fully armed with the proper knowledge, and ever seeking to learn and accomplish more.

Ernest Casadaban is such a man. He is a modest man with intent and purpose. His "birds" are his hobby. These birds also represent a contribution to his fellow man.

He grew up in New Orleans. All his life he has been fascinated with birds and usually had a pet bird of some variety. He has lived here and been in the nursery business with his brother since 1944. The Casadabans have four children.

About six years ago, he acquired a pair of wood ducks. From this pair, both he and his wife, Evelyn, became interested in owning other birds and water fowl. Within a short time, his pond contained a pair of swans and several species of ducks. For several years the swans made no attempt to nest.

He learned that swans in the wild will dominate about five acres of water and will run off all other water fowl before they will nest. When he removed the ducks, the swans began to nest and raised young.

He began with one pond. He now has four, with four different species of swans, each different and- incredibly beautiful. There are also many aviaries and he can't even estimate the number of birds. Through years of patience, trying different feeds until the right combination is found, he has succeeded in breeding species never before, or rarely, bred in captivity.

The Bleeding Heart Dove is one of these species that did not breed in captivity, but, Ernest Casadaban has offspring from these doves and a nest of eggs that will soon hatch.

Many of the species of birds that he owns, and others he hopes to soon acquire, are endangered species. His goal is to find the secret of reproducing them, with the ultimate goal of replacing them in the wild for future generations. He breeds only pure birds, not attempting to produce hybrids.

A situation of this kind makes his and other pure bird breeders programs even more important. It also results in trading among the breeders from all over the world. He is currently negotiating for a breeder in Germany, who obtained them before the embargo.

The aviaries are roomy, clean and sunny with planted living shrubs and other attractive additions to simulate their natural environment. A radio is set up with speakers to keep the birds used to human voices so that when the groups come, it does not make the birds unduly nervous.

One interesting thing is that the birds recognize colors. Mr. Casadaban always wears the same color to feed and tend to them, otherwise, they do not recognize him.

Many a girl scout, garden club and groups of children from schools have made the fascinating trip through the aviaries and admired the swans in the pools. Each person who has gone through this tour comes away with added knowledge and a new respect for animals in general. One simply cannot be with either Ernest' or Evelyn Casadaban and not acquire knowledge or respect.

The Casadabans belong to several organizations which have the breeding and preservation of birds as their goal. Some members of these spend their vacations in areas where particular species are endangered or thought to be so, to count and study the populations. The contributions are invaluable.

The Casadabans belong to the Whooping Crane Society, the International Water Fowl Association and the American Game Bird Preservation Society. They attend the yearly conventions where some two hundred other breeders come to learn and do some "bird trading" to further their own breeding operations. They are active conservationists and are respected world wide for their integrity and their successes.

Some of the birds are sold to other breeders, a few for pets to carefully screened prospective buyers and some to zoos all over the world.

Ernest Casadaban is a man this community has a right to be proud of. This profile is more about the birds than the man, but this is the nature of the man. He is anxious for others to learn the fascinating things that he has learned.

The honors he has received he will not mention, he only wants others to learn and care. In the meantime, he continues his constant and ever expanding knowledge and enjoyment of his birds from which future generations will benefit.