Large scale pictorial maps of Covington and Mandeville were produced in the 1980's to show the commercial development (and give historical perspective) to west St. Tammany's largest communities. Since the early history of the area is directly tied with the location and size of its commercial areas, the maps aimed to help spotlight the older business districts while also showing the newer shopping areas. This was before the internet intervened and began competing with the "brick and mortar" stores.

In 1985 A. G. Crowe of Slidell began producing large three foot by five foot posters of my maps. Here is a photo of him (at left) presenting Mayor Ernest Cooper of Covington with a framed copy of the 1986 Covington area map which included Abita Springs and Hwy. 190 down to the interstate. Click on the images for a larger version. 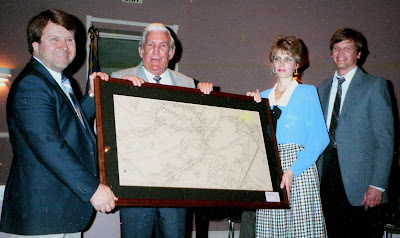 The presentation of the finished three foot by five foot map print of Mandeville was photographed and published in the newspaper. See picture below. 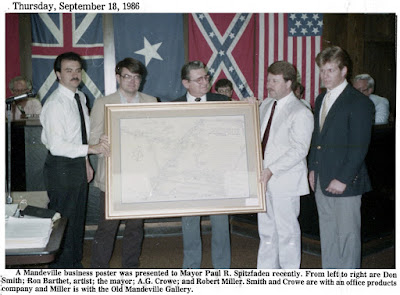