In 1992, Carol Jahncke of Covington decided what St. Tammany Parish needed was a song written specifically about each town and the more significant community landmarks. For more information about the music that resulted, click the article images below. 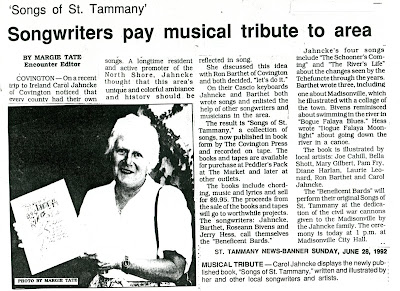 COVINGTON — On a recent trip to Ireland Carol Jahncke of Covington noticed that every county had their own songs. A longtime resident and active promoter of the North Shore, Jahncke thought that this area's unique and colorful ambiance and history should be reflected in song.

She discussed this idea with Ron Barthet of Covington and both decided, "let's do it."

On their Casio keyboards Jahncke and Barthet both wrote songs and enlisted the help of other songwriters and musicians in the area. The result is "Songs of St. Tammany," a collection of songs, now published in book form by The Covington Press and recorded on tape. The books and tapes are available for purchase at Peddler's Pack at The Market and later at other outlets.

The books include chording, music and lyrics and sell for $9.95. The proceeds from the sale of the books and tapes will go to worthwhile projects. The songwriters: Jahncke, Barthet, Rose Anne Bivens and Jerry Hess, call themselves the "Beneficent Bards."

Jahncke's four songs include "The Schooner's Corning" and "The River's Life" about the changes seen by the Tchefuncte through the years. Barthet wrote three, including one about Madisonville, which he illustrated with a collage of the town. Bivens reminisced about swimming in the river in "Bogue Falaya Blues." Hess wrote "Bogue Falaya Moonlight" about going down the river in a canoe.

The "Beneficent Bards" will perform their original Songs of St. Tammany at the dedication of the civil war cannons given to the Madisonville by the Jahncke family. The ceremony is today at 1 p.m. at Madisonville City Hall.

Two years ago Carol Jahncke was traveling around Ireland with her husband, Herbert. Jahncke was intrigued that most of the counties that they visited had their own song. The ballads were part of an ancient Irish tradition of passing down events, culture and history.

"I thought that places in St. Tammany parish should have their own songs," Jahncke said.

She approached Ron Barthet, Rose Anne Bivens and Jerry Hess and told them her idea. They said, "Let's do it," ind began working on the songs.

The group called themselves "The Beneficent Bards," and came up with 10 songs. "It's remarkable that we came up with so many songs in such a short time," Barthet said.

Most of the songs have the local rivers as their theme. "We first thought of doing historical personalities and incidents," Bar-thet said, "but it came down to the rivers. And it is a very timely thing to focus on the rivers."

The songs were put together in a book and on tape. Songs by Barthet are "In Love Again With Covington," "The Firefighters' Song" and "Madisonville." Bivens contributed "Bogue Falaya Blues."

Hess wrote the songs, "Tchefuncta — That's Where" and "Bogue Falaya Moonlight." Jahncke's songs are: "The Schooner is Coming," "A River's Life," "The Spring Floods Have Come" and "Grey Cloud."

On the tape, the songs are sung by Barthet, Bivens and Hess, accompanied by guitars and Paul Andry's Bayou Dulcimer Club.

The Beneficent Bards decided that "In Love Again With Covington" was the perfect song for the city to adopt. "It's real whistley and hummy," Jahncke said. They approached Covington Keith Villere and the City Council. "They accepted it 100 percent," Jahncke said.

On Oct. 10, the song was officially dedicated. The area around the gazebo was decorated with baskets of goldenrod and lumina-rias. City Councilwoman Pat Clanton made the official dedication.

Members of the Dance Players of the Creative Dance Center performed a folk dance interpreting "In Love Again With Covington." The dancers, wearing colorful costumes, were Ramona Bivens, whose mother is a member of the group, Camille Duplantier, Carrie Griffis and Tara Simpson.

After the dedication, the singers gave an impromptu concert and sang all the songs in the collection.

All proceeds from the sales of the book and tapes will go for specific projects or goals that the Beneficent Bards have chosen. Funding for the first goal has been met, and will soon be in evidence.

The group decided to replace the original sign at the entrance of Bogue Falaya Park. The sign will read: "Bogue Falaya Wayside Park — 'Let It Not Be Said and to Your Shame, This Place Was Beauty Before You Came.' "

The next project will be a wishing well, with proceeds going to yet more future goals.
End of newspaper article
. 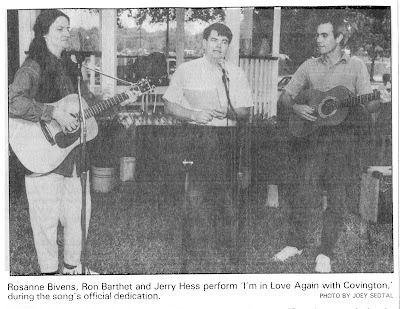 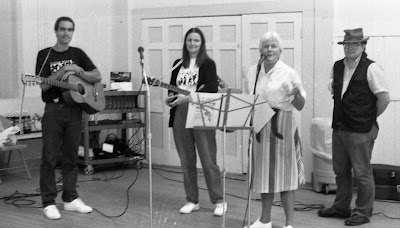 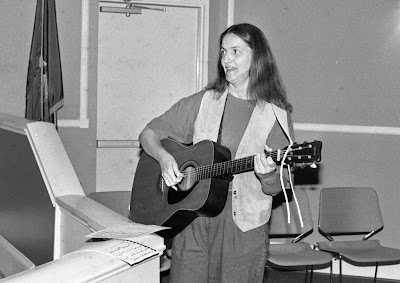 Roseanne Bivens sang "In Love Again With Covington" before the City Council members. 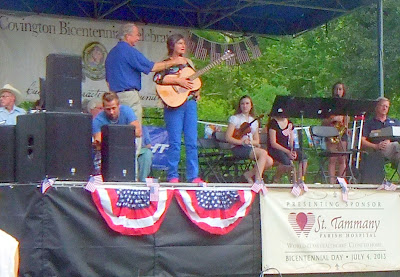 Sunset at the Landing Concert