Around 1991 News Banner reporter Ray Broussard sat down with three of Covington's most memorable women and asked them to tell him about old Covington, the way it used to be. This is his story of their stories. Click on the image to make it larger. 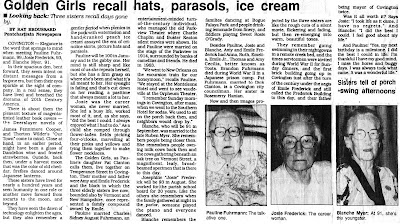 COVINGTON — Elegance is the word that springs to mind when meeting Pauline Fuhrmann, 99, Josie Frederick, 93, and Blanche Myer, 91. In their spacious den, bent forward, they seem intent on distant messages from a bygone era, but then their eyes sparkle at the sight of company. In a real sense, they have lived and breathed the diorama of 20th Century America.

There is about them the pleasant texture of magenta-tinted leather book covers Deerslayer novels of James Fennimore Cooper, and Thorton Wilder's "Our Town" come to mind. Close at hand, in an earlier period, might have been a glass of Dandelion wine and frosted strawberries. Outside, back then, under a harvest moon that was the color of old cheddar, fireflies danced around Japanese lanterns.

These sisters have lived for nearly a hundred years and seen humanity in one role or another move forward from oxcarts to the moon, and beyond. They have seen the dawn of technology enlighten the ages, but they also remember a gentler period when picnics in the park with watermelon and hand-cranked peach ice cream assayed the era of crinoline skirts, picture hats and parasols.

Pauline will be 100 in January and is the gabby one. Her mind is still sharp and like most of us she repeats herself, but she has a firm grasp on where she's been and what it's all meant to her. Her eyesight is failing and that's cut down on her reading, a pasttime that always meant a lot to her.

Josie was the career woman, she never married. She led a busy life, worked most of it, and, as she says, "did the best I could. I always enjoyed what I had to do." As a child she romped through flower-laden fields picking four-o'clocks, marveling at their pinks and yellows and tying them together to make flower necklaces.

The Golden Girls, as Pauline's daughter Pat Clanton calls them, live together on Temperance Street in Covington. Their mother and father were Amy and Emile Frederick and the block in which the three elderly sisters live now, bounded also by Vermont and New Hampshire, once represented a family compound owned by Emile.

Pauline married Charles Sidney August Fuhrmann, an entertainment-minded turn-of-the-century individual, who managed the old Parkview Theater where Charlie Chaplin and Buster Keaton silent movies were shown. He and Pauline were married on the stage of the Parkview in 1914, surrounded by banks of camellias and friends. He died in 1963.

"We went to New Orleans on the excursion train for our honeymoon," recalls Pauline. "We stayed at the Monteleone Hotel and went to see vaudeville at the Orpheum Theater.

"I remember Sunday mornings in Covington, after Mass, when we went to the Southern Hotel for sodas. We used to sit on the porch back then, and neighbors would drop by."

Blanche, who will be 91 in September, was married to the late Ruben Myer. She remembers people being closer then. She remembers people owning milk cows back then and the cows gathering beneath an oak tree on Vermont Street, a magnificent, leafy, broad-beamed specimen that is there to this day.

Dancing at the Park

Josephine "Josie" Frederick will be 93 in August. She worked for the parish school board for 20 years. Like the others she remembers when the family gathered at night in the parlor, someone played the piano and everyone danced. Blanche remembers the families dancing at Bogue Falaya Park and people drinking lemonade from finery, and fiddlers playing Sweet Rosie O'Grady.

Now and then images projected by the three sisters are like the rough cuts of a silent movie, flickering and fading, but then re-emerging into warm, beautiful tones.

They remember going swimming in their nightgowns in a remote creek bed, and the times servicemen were invited during World War II for Sunday dinners, and the first brick building going up in Covington lust after the turn of the century under the aegis of Emile Frederick and still called the Frederick Building to this day, and their father being mayor of Covington twice.

Was it all worth it? Says Josie: "I took life as it came. I have no regrets." And Blanche: "I did the best I could. I feel good about my life."

And Pauline: "Yes, my next birthday is a milestone. I did the best I could in life. I'm thankful I have my good mind. I miss the horse and buggy days. I always took what came. It was a wonderful life." 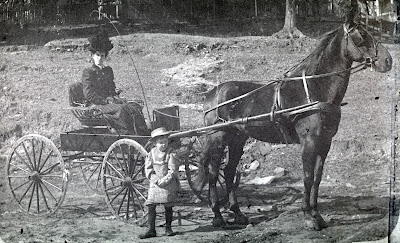 Memories to treasure, memories to share,
Always a pleasure, To show that we care.