In 2014 the newly renovated Southern Hotel was re-opening, and longtime resident Pat Clanton was asked to write down some of her early memories of the establishment.

Born in 1929, her most memorable recollections took place in the 1950's. Here are some excerpts of the short essay she wrote about what it was like in the Southern Hotel in the 1950's. 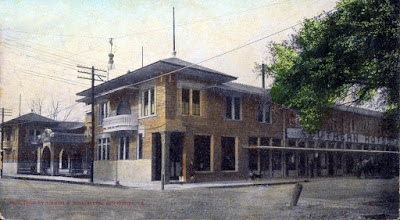 "Of course everyone remembers the large stone fireplace in the lobby and the wonderfully large fish pond. The rocking chairs on the front veranda and Tugy's Bar," she started.

Clanton tells about how her mother (who was born in 1892) told her stories about how popular it was for the young people in Covington to gather for visits, over an ice cream soda at Schonberg's Drug Store to wait for the mail to be put up. 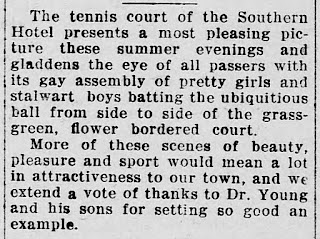 "I remember Dr. Henry Gautreaux's office was also in the building, upstairs facing New Hampshire Street. I think that it was next to Schonberg's Drugs. There was a very nice little Jewelry Store, Smith's Jewelry Store,  owned by Mr. Pete Smith.

"When I was 12 years old I use to pass his shop, and I had my eye on a Zercon ring. I bought that ring with some money that I made selling popcorn for Dad. That was in 1941 and I have that ring to this day," Mrs. Clanton recalled.

Bill Rose had a Barber Shop in the building and a Dentist, Dr. Logan Magruder, had an office upstairs at the corner of the building, over looking the alley, she went on to say. "A little later in time Jonette Dunning, now Mrs. Richard Shelton, had a Flower Shop, Dunning's Flower Shop, this was in the 1940's into the 50's. Jonette made my bridal bouquet and bridemaids flowers for my wedding in 1950," Mrs. Clanton recalled.

At some point in time Schoenberg's closed and the store was taken over by Mr. Walter Jones and it became Jones's Drug Store. For a long time Covington had and supported five drug stores in the downtown business area.

At some point in time, Tugy's Bar moved to the west side of the Hotel near the parking lot.

"Playmaker's formed in 1953 and 54, and I do remember that for a short time we had a desk in the Lobby of the Hotel selling tickets for our first play in the Playmaker's Barn in San Souci Forest," Mrs. Clanton explained.

"I also remember that in that year or maybe just a little later the Rotary Club held a Dance in the Patio of the Hotel. It was beautifully decorated with ferns and other large green plants. There were little lights hung here and there overhead and across the Patio, tables with white table cloths and the theme of the party was The Roaring 20's .

"This appealed to the thespian spirit of the young and enthusiastic Playmakers, so we all donned costumes of the 20's, and it was a wonderful evening as the band played until the wee hours of the morning. As they said in all of the newspapers, "a good time was had by all."

She then remembered that her Dad, Sidney Fuhrmann, managed the Southern Hotel Dining Room for a number of years in the 40's and early 50's.

"I wish that I could remember just when he took over that Management and or when he no longer performed that duty. I do remember that you walked down a hall from the Lobby to the Dining room," she said. "The room was large and there were many tables set with white cloths. Some were set for two, some for 4 and there were two round tables, perhaps for 6 or 8 dinners. Alphonse. the Chef, was famous in the Community for his Seafood Gumbo which was on the menu frequently. One was always able to order a cup or bowl vegetable soup was served in the dining room every day"

Every Tuesday at noon, the Rotary Club met in the dining room for their meeting. There was a piano in the room Mrs. Jessie Helms played the piano and accompanied the Rotary members as they sang various patriotic songs.

"There was also a small Lunch Counter area to the far west of the building which was adjacent to the more formal dinning room," Mrs. Clanton stated. People could order hamburgers, soup, or a sandwich etc. The entrance to the lunch Counter was from the parking area where the Greyhound Bus parked for boarding and for bringing the commuters back home. "Many people commuted to New Orleans every week day to their work in the city." she recalled.

There were several slot machines against the wall in the Lunch Counter area, Mrs. Clanton said. "Maybe as many as 4 or 5 and, oh boy, they were in use. Someone was always playing the slot machines." 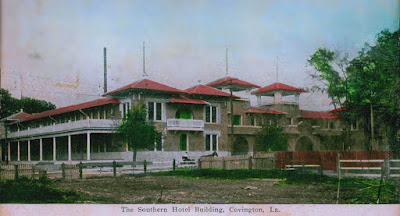